reply | flag
message 2: by [deleted user] (last edited Jan 02, 2011 04:03PM) (new)
Jan 01, 2011 10:58PM
Name: Driftwing
Age: 3 years
Gender: Male
Personaliy: Smart,intelligent and responsible.Driftwing does what he can for his clan and will trudge through treachrous weather to hunt for his clan.He is a very knowing cat and will do anything for his clan.
Apperance: 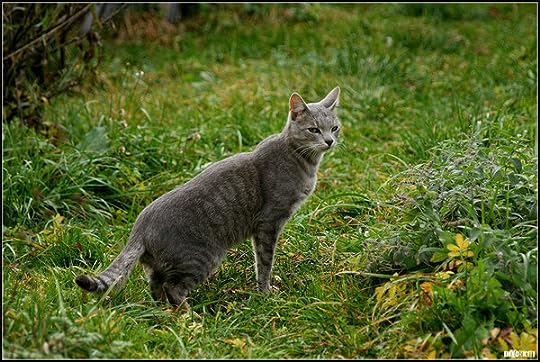 History:(Optional) Driftwing as a kit loved to play outdoors.He was a cheerful kit and grew up to be a wise cat.
Kin: Soulpaw/song
Mate/Crush:
Other

Personailty: Soulpaw is a quiet cat who tends to not talk much.She's very simple but has a good sense of justice and will stand up for what she belives in.She can be very brave, despite her little flaw- everything must be in its rightful place. She's always been very orgaized and hates disorder.

Apperance: http://images.mooseyscountrygarden.co...
Soulpaw has large,aqua-marine eyes that stand out against her light brown coat.Her body is covered in white and black stripes, and her paws are pale white.

History: Meh, normal clan life as a kit, but I will edit her history as the RP goes on.

Personaliy: Rabbitpelt is a very edgy cat, but only because of his lean, small figure. He is easily intimidated, but his speed is nothing to scoff at. He enjoys running in the open moors, and his favorite meal is, surprise!, Rabbit. He's as loyal as a cat could be, and would do anything to protect his apprentice and Clanmates. He has no fear of being shunned by other Clans, as WindClan's opinion of him is the only one that matters.

History: Normal Clan life. Though, one time he burrowed himself into a rabbit den and hid there for a night after being chased by dogs. He was a rather large kit at that time, so the resident rabbits mistook him for another of their kin and slept with him. The next day, he came back with the entire family for the clan. Has been rather good at tracking rabbits ever since; and is excellent at guessing where rabbit dens might be from following their tracks. It earned him both his name (being changed from Gustkit to Rabbitkit), as well as his legacy.


Personality:A very sweet and affectionate she-cat with beatufil grace when she walks,she loves to run and to hang out with friend and tom's,Loves her clan but might just be disloyal(LOLZ!),don't get her pissed PLZ!She's a very nice and awesome chic and can be stern.She's very out-going and adventerous.


History:Was a Loner for 10 moons then raced away from a mate she had for 3 moons who got mad at her and broke her left back leg.she went to a kittypet's owner and got it healed she then raced out to find a new mate and found the clan.

Personailty: Elmice is a stubborn, straitforwad kind of cat.When he has his mind set on something, it's almost impposible to change it.He admires the medicene cat, because he sees them as a different kind of warrior fighting a different battle.He has a good sense of what's right and wrong, and hates traitors and when people disobey the Warrior Code.

Appearance:
http://farm3.static.flickr.com/2471/3...
Elmice is mainly white, with one gold eye and the other a shade of jade green.He has orange and black spots with a few light rown spots also.

History:Moonheart was intelligent as a kit,she was smart and new all the techniques.She would love to sneak out and play with the apprentices.When it was her time to be an apprentice she listned and didnt play.As a warrior she was hard-core and did what what she was told,when she was told.
Kin: ??
Crush: OPen
Mate:died
Other:

Age: about the same as a new, but experienced warrior

Personality:
generally calm. She doesn't talk much for fear of letting out her doubts about being the clan's medicine cat. She is also afraid that if she did say anything to Driftwing he'd reject her. She often becomes lost in thought and almost all of her visions are irregular or irrelevant, so when she sees signs of danger no one believes her. She must rely heavily on her apprentice, Brokenpaw.

History:
Rainpaw was a very playful kit, but she was never as good as any of the others at warrior skills, though she dreamed of becoming one until she was out in the woods on her own and was attacked by a rogue. She was so horrified that she vowed to help those who had to face this fear every day as a medicine cat. From then on she was quiet and didn't play often, completely inside herself. Now, as a medicine cat she often wishes she'd chosen a different path.

kin:
her mother and father had her early and are elders (mom-Cindertail, dad-Swiftpath)she has no siblings

Crush:
Driftwing (but she's a medicine cat so she can't say anything)

Personaliy: Brokenpaw is a very shy, timid cat that can attribute this to her early encounter that lead to her life threatening injury (see history). She is very attentive and sweet, but hardly ever displays her personality. She would rather appear to be an empty cat then show her true, wild, personality. Brokenpaw doesn't mind helping Rainfire, but instead finds it enjoyable and a mark of how important she is.

Appearance: http://www.freewebs.com/foxstep/Dream...
Brokenpaw has short, thin hair that is colored with many spots of color. She has a tortoiseshell colored pelt that is beautiful and very unique. Her eyes are a deep, inviting amber color that is also unique. A large scar runs through her face, leaving her blind in one eye.

History: Brokenpaw's history is very much like Brightheart's was. She was told by StarClan as an apprentice that a war was about to bubble to the surface, so she could only interpret this as a reason to cross borders onto RiverClan's territory and investigate the river. She, upon investigating the river, discovered a drowned cat's body. Brokenpaw jumped in to rescue the body, but was then attacked by a group of rogue's looking for a meal. She fought valiantly, but had never been much of a fighter so she was left bleeding and broken in the bottom of the river, drowning. She was rescued by a warrior that had followed her but then had lost her trail. Rainfire healed her, but could do nothing about her blind eye.

Name: Almondpaw. Later, Almondheart.
Age: 6 moons
Gender: Female
Rank: apprentice
Personality: Extremely shy. Almondpaw only comes out to eat, and, therefore, is not very social, but is a fast runner.
Appearance: A very small, young calico cat. Almondpaw has a broad black splotch across her back, much like a saddle, with smaller goldenrod spots around it. Her eyes and left ear are the same goldenrod color, and the top of her head is black. Almondpaw also has a pink nose and yellow (almost green) eyes.
History: Almondpaw was mistreated by the rest of the kits for being small. She grew up having no friends and runs from just about anything. It will take hard and tenacious work to turn this little calico into a warrior.
Kin: Elmice?
Mate/Crush: None, since Almondpaw is still a kitten.
Other: Needs mentor...

Personality: she's a shy cat. SilentIcepaw has few friends. she's not the strong type but has the ability to observe almost anyone without being seen. she could blend with the crowd and if she did not want to be found, no one will be able to find her; unless the one looking for her surpasses her ability.

History:SilentIcepaw was the only daughter of a very powerful cat family in the other clan. But she was kidnapped while still a kit and wind up in the WindClan. ElmIce took her in and raised her as his kin.

Name: Oakfur
Age: 3 years
Gender: Male
Rank: Warrior
Personality: Stern, but extremely understanding, Oakfur will make an amazing mentor. Oakfur is a strong and fierce warrior with long claws (almost Oakclaw).
Appearance: Oakfur has chocolate brown fur with a rough appearance almost like that of an oak tree. His peridot green eyes shine through the night giving Oakfur strong night vision, even for a cat.
History: Oakfur had one sister that died soon after becoming a warrior.
Kin: None
Mate/Crush: Mossheart
Other: Oakfur's favorite food is mice!

History:Was a neutral cat until her mother was killed by a fox attack, leaving winterfur orphaned. the windclan adopted winterfur into the clan soon after that.
Kin: None
Mate/Crush:
Other :None