This is the only thing I've written since April. It feels good to have something to post.

En Route to Sandusky, Ohio
Chapter one (the above was the prologue)
http://www.goodreads.com/story/show/2...

Yue and I are cowriting a novel :D And you should definitely read it. I give you THE VIRGINITY WARS!!!
http://www.goodreads.com/story/show/2...

YES WAY. YOU SHOULD GO READ AND LET US KNOW WHAT YOU THINK.

Mod
I WILL. BUT RIGHT NOW I AM PACKING. AND PLANNING FINNICK-Y THINGS.

YUE I DON'T KNOW HOW TO ITALICIZE ON HERE.
Well, I do, but every time I try, it won't let me just italicize part, it italicizes the whole thing. I mean, if I put the close thing in, it stays there. IDK IF THAT EVEN MAKES SENSE.
But. I posted Where Things Stay Hidden here on Goodreads. It's been reviewed by majoy reviewrs (AKA Yue) and got great reviews.

"I don't know what to say. It's freaking awesome. Also, character is awesome. Idea is awesome. I just used awesome three (four) times in a row now. THAT'S AWESOME."

No, I know. Whenever I put that there, it's like, YOU KNOW WHAT? I'M JUST GONNA STAY HERE. 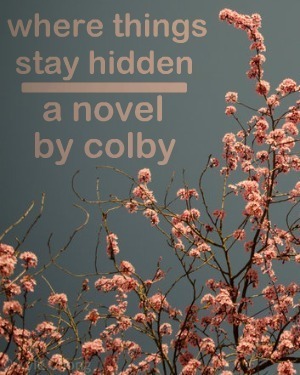 Where Things Stay Hidden has a few more chapters up since the last time I posted here.

PLEASE PLEASE read it! I really love your guys' criticism.

Wait, the book or that cover which I am not using but still posted?

AGREES. I'm not a huge fan of the cover I just made, I was simply bored.

Colby wrote: "AGREES. I'm not a huge fan of the cover I just made, I was simply bored."

hahahah but it is very appealing.

I just prefer its old cover.
I'd post a picture, but I'll hope that you'll be interested enough to click the link and then get into the story. ;P

♪NOW THE PARTY DON'T START TILL I WALK IN♫

Hey! (Thanks for bumping my topic. Now EVERYBODY MUST READ MY STORIES.)

(You are welcome. THEY ARE FORCED TO READ THEM. MWA HA HA.)

(Btw, have you edited your book since I last commented on it?)

(*Glares* EMILY GO WRIIIIIIIIIIITE.)
(Even though I'm being totally hypocritical because I haven't written like all week. AND I NEED TO.)

Colby wrote: "(*Glares* EMILY GO WRIIIIIIIIIIITE.)
(Even though I'm being totally hypocritical because I haven't written like all week. AND I NEED TO.)"

(I will when I'm on my computer. I'm on the family computer because I'm home alone.)

YUE HOLDEN DOESN'T WANT TO KNOW WHO WRITES WHO SO YOU BEST HOPE HE DOESN'T COME HERE.
And. Um. Yeah. I shall write after I do my Gatsby homework.
And it makes it just a little bit more awkward that I got into a chapter of WTSH and am now here to post it...
http://www.goodreads.com/story/show/2...
*backs away awkwardly*

I already read my Gatsby chapter, so I jsut need to do book logs. It can only take me like 20 minutes, and my backpack's right over there. But I'm sooo lazy to reach for it.

That was last night. XD I finished my homework AND MY CHAPTER OF TVW.

OOOH. I didn't look at the times...hehe.

Good luck with that.

I read it wrong. Oops. SO OUT OF IT AND WOOZY AND RAMBLY AND WEIRD.

Where Things Stay Hidden. It's my current novel.

YAY. I need a drink reaaally bad. Chips and salsa without water=BAD IDEA.

Alright, I uploaded almost everything we have ready of TVW right now on Goodreads, which I had forgotten to do for a long time.
http://www.goodreads.com/story/show/2...

http://www.goodreads.com/story/show/2...
The Virginity Wars is up to date again.

I need to read that sometime.

YES YOU DO. IT DOES THE FOLLOWING:
1. Gives you an opportunity to read both mine and Yue's writing in one setting.
2. Makes you chortle.
3. Helps guarantee that Yue and I don't go insane and kill each other.
4. Gives you an entirely new outlook on life!
5. It's a story. About sex. You're a teenager. Of course you want to read it.

I HAVE A NEW CHAPTER.
http://www.goodreads.com/story/show/2...

reply | flag
« previous 1 2 next »
back to top
This topic has been frozen by the moderator. No new comments can be posted.
Add a reference: