}~>O MERBOOKS: The Group For All Things Mermaid O<~{ discussion

Haven't read this one yet, so I don't know much about it. What do you guys think?

And here's a link to the sequel, Undercurrent.

Hmm...see, I have conflicting feelings toward this book. I kind of want to read it, but if there's not much mermaids/sirens, I don't think I'd like it.

Thanks for the tip! I'll probably hold off on this one for a while. :D There's definitely better-looking mermaid and siren books coming out.

Mod
I want to read it very much.
I love a good fictitious murder.

The paperback has been shipped last week. But it will take some time until I read it.

I am with Alyssa. I ploughed through 154 pages and gave up.
- The plot is so disconnected. Things happen without the reader being "informed". For instance you switch from the scene in which Justine storms out of the beach house to the scene after her funeral and you ask "What? Somebody has died? Who, when?"
- On the other hand you know way before Nessa what those ewomen around her are (the title, the flashy mirror eyes). Yawwwwn.
- The characters are uninteresting, too mean to be true or too dumb to be comfortable with.
- There are sirens or decendants of evil man-eating sirens, all right. But: no underwater plot, no fins, at least I didn't spot them when I was flipping through the rest of the book.
-The romance isn't believable to me. (I am glad you enjoyed that part, Alyssa).

Mod
It was...okay. Didn't live up to my expectations. I started the book, but I hated how long it took for the characters to find out what was going on, when the reader clearly knows the "mystery" already. I skipped to the end, which was a lot more interesting and I have to say I kinda liked the romance. I think that the end of the book was just interesting enough for me to want to read the next one. Overall, it's not that great though.

Hmmm...I'm not too sure about this one now. I looked for it today at the bookstore, but they didn't have it. :(

Mod
the cover is beautiful though :)

The new edition will sport a totally bring cover that matches the sequel. (see author's homepage): 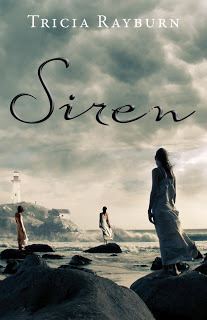 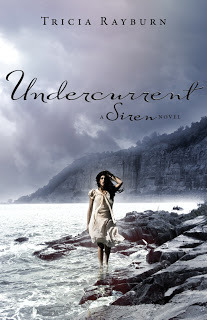 Mod
I like the other covers better,but these are quite pretty.
I think young adult covers are getting a bit too cliche.
They're all Empty Beautiful words with some aloof picture of some emo looking thing or very vague drawing with a picture of something from the book entangled in vines or whatever.

Just finished this book about an hour ago and I gotta say, it took me forever to finish (and when it comes to YA books, I can speed through them like crazy). I was glad to be able to buy the paperback, since it was cheaper than the hardback, and personally, I liked the cover better.

The story itself was only okay. It had its moments that I found myself enjoying, but for the most part it felt disconnected. There seemed to be so many things going on at once, and while you would follow one lead to all these questions, you'd get pulled towards another lead to another set of questions and you barely got any kind of answer until much later. Thank goodness for the end when everything was explained. I had figured much out, but after being pulled this way and that, it was nice to have things nicely laid out for me.

And one of my biggest problems was the fact that it never really seemed that Vanessa got to mourn her sister. I understand that she needed to find out what happened and jumped right into that so that she could ignore the pain, but it just seemed as though after what happened to Justine the story left it out like it wasn't important. Especially when you learn more about the two towards the end of the book and their relationship, I wish that we had gotten a little more than a few tears and an "I miss her" here and there.

Aside from that, I'd consider picking up the sequel. With the end, even though it was very hectic and I understood only so much of what happened with all the jumping, I'm curious to see what does happen next. It would be something I picked up once I saw the paperback was out and my to read pile was starting to dwindle down.

I was thinking about reading this one, but I've just never gotten around to it. Everyone says it's just okay, and since so many books are being released that I know without a doubt I want to read, I've just forgotten about this one.

And the new covers are so boring compared to the first one. :(

I read the first one when it came out, and recently speed skimmed the sequel.

Both are pretty "meh" books.

(view spoiler)[For one, Vanessa was a pretty dumb protagonist throughout both books, regarding coming to grips with where she's really from.

I can understand not wanting to confront her father until she has something semi-concrete; but the entire subplot in Undercurrent about sneaking into his computer and figuring out his passwords was meh to me.

By this point, Vanessa has figured out maybe 60-75% of her backstory; so why is she messing around? Just confront her father about it one night; she's got enough of the answers to be self consistent and to know what questions to ask.

Also, Undercurrent introduces that most hated element of all, a love triangle.

In Siren a bunch of Prep School Kids (at high school level) create a device that freezes an entire harbor solid to kill the Sirens. Think about that for a moment, and the amount of energy needed to make a harborfull of saltwater freeze solid in about 15-30 seconds.

Later in Undercurrent, it turns out that whoops, being frozen solid in a block of ice for three months isn't enough to kill a Siren. This doesn't even fit into the internal mythology of the Sirens -- in the series, they get weaker if they aren't in contact with salt water -- with that in mind, what happens when salt water freezes? It becomes salt-free!

But this isn't the real deus ex machina that I refer to for Undercurrent. For the climax of the book, when things are at their worst for Vanessa; following the Sirens luring her into a freshwater lake while wearing masks that feed them saltwater (water is incompressible, unlike air; so a scuba-like device like that would not work and still be portable).

When Vanessa is about to die/drown/give up and join the Dark Side -- her mother, whom everyone thought was dead (including Vanessa) shows up and slaps the other Sirens around.

Not only that, but she later admits to Vanessa that she drowned a sanitation worker so she would have the powers necessary to beat up the other Sirens. That sat really bad with me.

All the more so, because in an earlier passage in the book, a character told Vanessa all about the group of Sirens she's descended from, including the fact that a group of 11 of them killed....11,000 men over a period of time.

This combined with the total body count of the Sirens over the last two books, really took my suspension of disbelief, dragged it into a corner, and beat it insensate, particularly since all of these deaths would have a common thread -- the men would have big grins on their faces, and they all would have been found in the water.

You'd have a pretty intense manhunt and media speculation about the Joker serial killer -- so named because the Joker invented a poison that kills people and gives them a Joker-style grin in the process in the comic books during the 1970s.

...especially since the majority of the victims would be prep school kids from rich families with influence; placing even more pressure on the police/FBI to solve the murders.

Sorry for going a bit overboard there guys. It's just that when you start knocking off people left and right; you dramatically raise the 'plausibility' stakes; especially if you keep doing it; rather than stopping at one or two deaths that can be written off with a shrug and a notation "possibly fell off boat while drunk" in the file as the detective in charge closes it. (hide spoiler)]

Mod
No don't worry about it, but here's my opinion review thing since I've read the book and all now

(view spoiler)[ This book was boring until the very end when they froze the Harbor (Which was one of the dumbest ideas I've ever heard, I'll be honest). I didn't have an attachment to the characters, the plot was weird, and the don't even sprout tails in the water. There was only mentions of mermaid mythology. Or at least I didn't catch that.
I honestly just had a hard time with this one. Plus, I never thought of the freezing thing.Continuity issues? Seriously? Did Tricia self edit this or something? So many things could've been so much better. And I could do without the un-emotional schmex. (hide spoiler)]