ame: Giselle
Age: 16
Gender: Female
Orientation: Bi
Social Status(nerd, goth, loner, etc): emo/loner/nerd
Personality: She is a sweet loving person who hates hurting people unless she has to. She was brought up under the strict rules of her parents, who abused her. She hated it and never wants anyone to g through what she had to. She is always trying to learn new things and get her mind away from her past life.
Appearance: http://legacythumbs.weheartit.netdna-cdn...
Addiction(yes/no-state):(yes) Alcohol and drugs
Why are you here?: She knew she needed help because of her parents and addictions. She is also trying to ween herself of cutting her wrists and anything else she can cut.
How long have you been here?: It will be her second year in 2 weeks
History: Her parents were abusive, her father worse than her mother. She hates her life but wants to keep on living it, thinking there is something better out there. She has trust issues and trembles at the mentions of parents.
Family: Mother and Father(abusive and she hates them)
Crush: Elijah
Other: Her father did some unmentionable things to her before she ran away. She has bee hiding from him for a while now. He has almost found her a few times and is still after her. Her mother died three years ago.


Name: Michael (Mikey)
Age: 17
Gender: Male
Orientation: Straight
Social Status(nerd, goth, loner, etc): loner
Personality: He is quiet because he doesn't wanna hurt anyone with his words. He tries to hide his feelings and is always blocking people out. He has a constant reminder of what his brother did to him and father. They were both abusive towards him and he always took it. Being the younger brother wasn't the easiest. Especially when his mother died after he was born.
Appearance: http://media.photobucket.com/image/guy%2...
Addiction(yes/no-state):(yes) Alcohol, cutting, drugs, and smoking
Why are you here?: He is here to find refuge from his father and brother
How long have you been here?: it will be his first month next week
History: His mother died just after he was born and his father and older brother blamed him. He was brought up with abuse, both verbal and physical. He has a scar on his back because his brother cut him when he tried to escape.
Family: Father and Brother(abusive)
Crush: open
Other: He hits people when he gets upset and has no control over what he does when he is angry.

Name: Alice
Age: 16
Gender: Female
Orientation: isn't quiet sure.
Social Status(nerd, goth, loner, etc): goth/loner/emo
Personality: shy and quiet, doesn't like to get too close to people anymore because of what happened. She can sometimes just break down because of nothing yet wants so bad to heal
Appearance: 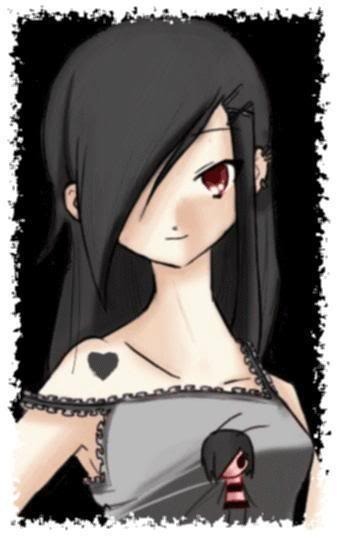 Addiction(yes/no-state): (yes) cutting, alchohol, drugs, and any dangerous thing that takes the pain from her chest.
Why are you here?: too afraid to kill herself but constantly thinks about it and doesn't know where else to turn
How long have you been here?: a month
History: Alice used to be a fun loveing girl who always participated in things, no matter what. She usually joked with her friends and nothing seemed to get her down. But, when she was in the 8th grade, she started having thoughts of depression and started her cutting stage. In the 9th grade, she was asked out by this one boy she thought was perfect, that was until he broke her heart in the 10th grade by telling her that he wasn't even happy in the first place with her and left her in pieces. She could never really heal because everytime she woke up, the pain from it came back and she just fell deeper into depression and she was afraid to tell anyone because she was afraid she'd get into trouble plus her family never helped because they always asumed she was okay
Family: mother and father
Crush: too afraid to have one but it's open
Other: she can sometimes spit out harsh things, but only does it out of the hurt she's in.