Mod
My new obsession!!!!! Just so you know the commic and shit...
http://books.google.com/books?id=KOWF...

Now, for some pics an random quotes! xD Be aware, you need a STRONG stomach to proceed, and i'm not even kidding! *evil grin* 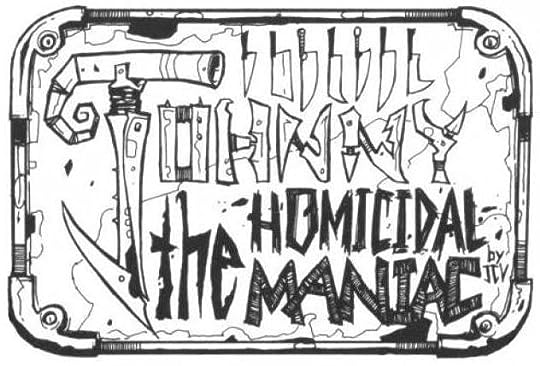 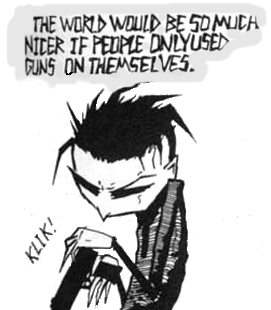 Johnny the Homicidal Maniac The series focuses on Johnny C., a deranged killer who elaborately slaughters anyone who irritates him. He drains his victims of blood to paint over a wall in his house to prevent a monster from escaping.

Todd "Squee" Casil
Todd Casil, better known as Squee after the noise he makes when frightened, is a young boy who lives next door to Johnny. Both of his parents have no care for him (especially his father who works countless hours and leads a miserable life after having Squee as a child) and his only shown friend other than Johnny is a small teddy bear that he carries around named Shmee. Shmee tells Squee that all his fears and nightmares are inside him in a dream. Squee is also friends with Satan's son, with whom he attends school. He has his own series called Squee!, which was later collected in the TPB Squee's Wonderful Big Giant Book Of Unspeakable Horrors.

Mod
The series is set in the mid-1990s in an unspecified city. Decaying urban streets, shadowed back alleys and filthy convenience stores serve as the series’ backdrop. Crumbling and covered with litter and graffiti, everything is in a state of bleak decay, overlit by the neon signs of trashy consumer capitalism.

Johnny lives in a decrepit, single-story house with the street address 777. The house has an extensive labyrinth of tunnels underneath. Johnny uses the subterranean rooms as dungeons and torture chambers, as well as a storage place for corpses, though he also buries the remains of his victims. The tunnels also provide him with a network to various locations, such as his neighbor Squee's residence. Johnny perceives the layout of the house as constantly changing, though he does not state if this shifting is the result of the supernatural forces at work within the house or his own psychosis. Johnny states that he found the house and moved in some time ago. He also constructed an unidentified flying object landing pad on the roof.
A later part of the story takes place in the afterlife. After accidentally shooting himself, Johnny journeys first to Heaven and then to Hell, and both turn out to have more in common with Earth than he expected.