I don't recall seeing anyone post about this site before.

A lot of us enjoy the artwork from scifi and fantasy novels. This website, Good Show Sir, has some of the more laughable ones, mostly from the 60s and 70s. They don't really live up to Frank Frazetta. It's good for a laugh.

Some recent good ones:

Well, if not death then at least a good solid finger of "Capitolistic exploiter of the masses" of space.

I've been burned by book covers too many times. I really like the cover, but then the book is nothing like it. My rule is to ignore the cover.

Since I'm resolved to only talk about Joe Abercrombie...

It frustrates me when the cover art doesn't depict anything inside the book, honestly. The US release of Best Served Cold depicts some dual claymore wielding war goddess that doesn't appear in the book. At least Goodreads uses the UK cover (depicting the rapier-like weapon she actually uses).

Didn't frustrate me nearly as much until the author went into detail on his blog about how much effort they put into making these covers, just to have the stateside release covered in nonsense.

I guess in the end it isn't a huge deal but it's nice to be able to refer to the artwork occasionally and have it reflect something in the actual work.

To me, the all-time worst cover is for Saturn's Children. It's a really good story, but I couldn't read it until I bought it for my Nook. There's just no way I could carry a book with that cover anywhere in the civilized world.

Of course, it's probably not as bad as the old cover of Stranger in a Strange Land. (When I selected the edition, the cover showed up, but when I click on the link, it doesn't. I'll go look for a picture.)

Okay, I hope this works: 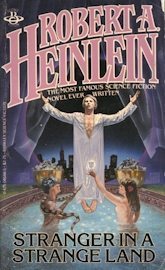 Sandi wrote: "To me, the all-time worst cover is for Saturn's Children. It's a really good story, but I couldn't read it until I bought it for my Nook. There's just no way I could carry a book w..."

Yeah, I read the hardcover, so fortunately I could take the cover off to read on the subway.

Stross pointed out on his blog that authors often do not get to pick the covers to their books.

One author described it as, when you open the book and start reading at Chapter 1 - that is mine. Everything else is some one else's