This begins the sixth week's reading in our new Presidential Series group discussion.

The complete table of contents is as follows:

The assignment for this week includes the following segments/pages:


We look forward to your participation; but remember this is a non spoiler thread.

We will open up threads for each week's reading. Please make sure to post in the particular thread dedicated to those specific chapters and page numbers to avoid spoilers.

This book was kicked off on October 4th. This will be the sixth week's assignment for this book.

We look forward to your participation. Amazon, Barnes and Noble and other noted on line booksellers do have copies of the book and shipment can be expedited. The book can also be obtained easily at your local library, or on your Kindle.

A special welcome to those who will be newcomers to this discussion and thank you to those who have actively contributed on the previous Presidential Series selection. We are glad to have you all.

TO ALWAYS SEE ALL WEEKS' THREADS SELECT VIEW ALL

Chapter 10 covers the Battle of the Wilderness. Grant wanted to push through the Wilderness, an area of dense cover, and hit Lee. However, it did not work out that way. They end up spending the night rather than marching, while Confederate Generals Ewell and A.P. Hill move in, and Lee waits for Longstreet's to join them. On the morning of May 5th, Grant takes the offensive and attacks. The two armies clash, although Warren and Hancock were slow to engage the enemy. However, the Union had the upper hand and they were close to a victory, but darkness stops the momentum.

On the 6th, Grant orders Warren & Sedgwick to attack and hold, while Hancock attack and destroy Hill's army. Lee bets Longstreet will arrive in time as Hancock attacks. Longstreet does arrive to flank Hancock by late morning, but he is injured and the momentum fades. Grant and Meade wonder where General Burnside is to turn Lee's flank, and plug the center of the two Union armies of Hancock and Sedgwick/warren. When he does arrive, he does help break Longstreet/Lee's first attack. Lee makes a counter-attack at Hancock's center, while Confederate General Gordon makes a last ditch attack on the Union right. However, by the end of the day, Grant holds the field. Lee hunkers down for a defensive, but Grant moves south towards Spotsylvania to draw Lee out.

Chapter 11 begins with a overview of Lee's life as Smith paints Lee as the aristocrat and Grant a product of a a new kind of army leadership, "common man" democratic elements. Unfortunate for Grant, Lee sends a corp down to Spotsyvlania. Grant attacks Lee's center with little success on May 10. On May 11th, Grant agrees to try a new concentrated formation at the "Mule Shoe" and it works at first until a Confederate counter-attack stops the charge at the "Bloody Angle." There is tough hand to hand combat that ends at about midnight.

Both battles take on heavy causalities. As Grant moves further South to Cold Harbor, Lee follows him. Both armies get resupplied with men. Grant again wants to strike fast before Lee had a chance to entrench, but the corp commanders were slow to do so. Grant goes ahead with a 60,000 men charge against a fortified position, and 7,000 die in the first half-hour. By the end of the chapter, morale is still high for Grant's army, and Grant knows it is only a matter of time before Lee's defeat. He draws a plan to cross the James River, hit Petersburg, then Richmond.

These series of battles are intense. Lee and Grant are trying to figure one another out, and it seems Lee has a good network and intuition for what Grant will do next. Grant also is adjusting how the corp commanders work in the Army of the Potomac. They are little wary than what Grant had in the West.

How you do think he is adjusting? On the flip side, how would you adjust to a man like Grant?

Mod
Well first I would know that he would keep his ground or try to; but on the other hand he would not expect us to make the first move and he would ALWAYS underestimate us.

Bentley wrote: "Well first I would know that he would keep his ground or try to; but on the other hand he would not expect us to make the first move and he would ALWAYS underestimate us."

Yeah, Grant has to adjust to Lee; he is much different than the generals in the West that is for sure. Grant also has to shake up his corp commanders: be offensive. However, he is still cool under fire, issuing orders where and when needed, and still takes the fight to the enemy. As a foot soldier, I'd like that.

You definitely see Grant trying to shape the Army of the Potomac. The commanders are not as aggressive and worriers. I like what Grant says to one officer:

I wonder how you reshape an Army to make its officer corp more aggressive?

I would reshape it by example and by placing similar minded men in charge.

Grant is adjusting to Lee but clearly it is more of a challenge.

Adjusting to Grant would require betting that he is planning an audacious attack on me.

I am enjoying this author's approach. He gives the details of what is going on at the time but always manages to get back to the focus of the book: Grant. By doing so he allowing us to see Grant in a new light. He also gives us enough of a perspective to see how much chance, circumstance, and personality played a role in the war.

Lee is more of a challenge, and a big factor is that Grant seems to realize pretty quickly he has the man-power and supplies to re-supply his depleted forces.

Also, it took awhile for men around him to adjust to Grant. Grant was lucky to find Sherman and Smith quickly.

Another twist as Grant continues to fight in the east: he is using more men in a frontal assault like Cold Harbor.

Here is a modern picture of one of the trenches that the Confederates used to fight back the massive charge that Grant lost 7,000 men in just a half hour. It shows you don't need a deep WWI type trench; a sunken piece of land will do: 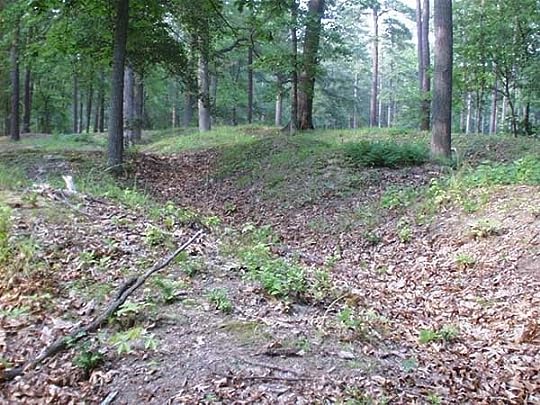 These number do not compare to the onslaught of WWI, but still, do the numbers shock you? What do you think was Grant's reaction to the numbers?

I would not be easy fro grant to shake up the high command even he were to attempt to out some of his more feeble corps commanders. It can't be understated that he did in fact have very aggressive subordinates when he faced Lee. Most of his corps commanders at that point had become highly experienced in the ways of this war along with their hardened veteran formations. This was not the bumbling union army we are used two in the first half of the war, they know their work well. Grants largest problem in being more aggressive seems more based on a total tactical change in Lees camp. After the first phase of the Wilderness battle when Lee moved up aggressively to throw the union army back over the river he almost immediately dug in and would stay dug in for the duration of the war. It should not be forgotten that Lee was an expert on fortifications and was able to make unbelievable use of those skills with what little men he had left. Nobody it would seem was fully prepared for what this change in tactics would produce; something that looked hauntingly like the trenches of World War 1. It was certainly far removed from every campaign that preceded it in the scale of entrenchments and the utter brutality that produced alongside modern rifle/cannon technology.

The army of the potomac was larger and more aggressive than ever at this phase in the war. Lee, one of the greatest tacticians of all time made them pay for every bit of it.

Great comments, Dr. You do forget that Lee was an expert on fortifications (as well as speed), something different that Grant faced. I think he really had to adapt and the Army of the Potomac had to adapt to Grant.

You do read that Grant had a sense of this new type of war. Sherman, too. Grant did whatever it took to destroy Lee.

Can you imagine a Grant in WWI? I think he would be very frustrated because he could not move his armies.

Definitely, Grant had a clear understanding of what he had and what his opponent did not. While that seems kinda like, duh, it's something that all of the previous commanders did not possess.

Sherman prophetically displayed a sense for what the war was and would be come from the outset.

Thanks for the feedback.

Mod
Bryan wrote: "Great comments, Dr. You do forget that Lee was an expert on fortifications (as well as speed), something different that Grant faced. I think he really had to adapt and the Army of the Potomac had..."

I agree...I think he would have hated a World War I. But then again he would not have been like those commanders so maybe in some way the battles he fought and engaged in might have been different.

I think too that Smith is doing a fabulous job - a living history lesson following most Grant thru his prior life and now the war - being given the information that Grant did and did not have about his theatre of operations and the others.

I think the comments that "Grand had to adapt to Lee" is striking if one thinks back to the beginning of the war. Lee seemed to mostly be doing what Grant did was to try to take the aggresssive positions.

Would the war have ended much quicker if Lee has stayed with the North and accepted command of the Union forces? Would the superior industrial posture of the North have changed his initial tactics?

That both men were physically so close to the carnage must have been incredibly difficult.

Anyway just some comments to add that I thought might be of interest.

Also following this book I am getting a much better feeling for the geography of the regions. It is really very positive - albeit time consuming

Thanks for your comments, Vince. I do think about what would happen if Lee came to the Union or Grant started out in the East first.