Delete periods in order to bold.

Personality: Sparrowclaw is a mini Tigerstar. That is what most people think of when they first meet him, that is. Sparrowclaw is actually like a Tigerstar, Brokenstar, Hawkfrost mix. He is cruel and ambitious, ready to kill any leaders, deputys, warriors, apprentices he has to in order to become leader and take over the clans. He trains too young kits and blames it on others, teaches apprentices and warriors the death bite and what herbs could kill a cat. Sparrowclaw uses force against medicine cats and leaders to make himself great and cast out cats he does not want in his clan. So, what I said first, he is a 3 way bad guy mix. DX This is a cat that you would NOT like to share a clan with. Luckily, he is fading fast in the DF, but still has the ability to use all of his cruelty and harshness. If you want more specifics on Sparrowclaws personality, then just ask for more and I will add away. 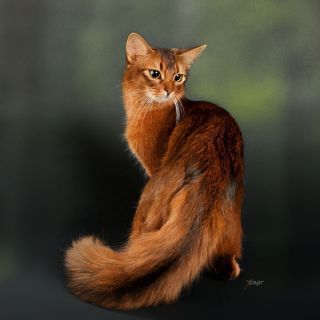 History/ROD: Sparrowclaw once had a normal, none power ambitious life. He had just received his warrior name a few sunrises before his mate, Dawnfall, told him that he was going to become a father. Sparrowclaw was very excited and could hardly wait until his kits were born. For moons Sparrowclaws clan had been suffering with battles off and on and Sparrowclaw just hoped that the peace would keep until Dawnfall had safely kitted. His wish came true, but soon after Snakekit and Ravenkit were born, a war had to take place over food since it was the middle of leaf-bare. Dawnfall insisted that she participate, and Sparrowclaw didn't hold here back because this would be their first war since they were new apprentices. In the middle of the battle, Sparrowclaw was pinned down by a giant tom who refused to let go of him. Dawnfall on the other hand was being raked across the sides and torn to peices by another giant tom. These to were just as evil as Sparrowclaw would turn out to be. They both knew of Dawnfall and Sparrowclaw, so the tom hat had Dawnfall in his grip took his chance and lunged for Dawnfalls throat. Her cry was cut off abrubtly and Sparrowclaw had to watch it all. The tom swore it was an accident, but Sparrowclaw knew the truth. After the battle, he refused any help to carry Dawnfall back. His two sons were old enough to see by then but their memory of their mothers vigil is very fuzzy and unclear to them. Sparrowclaw refused to even look at Snakekit and Ravenkit again. He cut off all connections from them and if anyone mentioned how they were related Sparrowclaw would personally rip their fur off. Snakekit and Ravenkit now always get teased and called half clan or kittypet because no one except the oldest of elders, Leader, deputy, and more senior warriors can remember Dawnfall and Sparrowclaw. Snakekit and Ravenkit have made it to warriors and are now Snakefang and Ravenflight. They have both died and followed Sparrowclaws evil personality and gone to the Darkforest, and now their true father must see them every day in the DF. They still do not know him, but I was thinking they could find out and see what happens from there. This was a really old idea and I was in a hurry to write it so sorry if its cheesy!