Delete the periods in order to bold.

Mod
Name: Needlewhisker
Gender: Female
Rank: Deputy/ Now queen.
Personality: Needlewhisker is a fun cat. She is light and bubbly, but is serious when it comes to clan business.
history: mom died at birth, and dad abandon her
app: http://www.google.com/imgres?imgurl=h...
mate: nightfall (darkclan there forbidden so no one knows about them shh.....)
other: none

Mod
Name: Cherveltail
Gender: tom
Rank: Medicine cat
Personality: grumpy at times, but usaly nice and calm
History: his parents were Medicine cat and Warrior and he hopes not to follow in their footsteps
Appearance: http://www.hear2heal.com/images/ATTIT...
Mate: Forbidden
Kin: OPEN
Other: none

name: Flamespark
gender: female
Rank: queen
personality: amusing, comical, fierce in battle
history: Her mother abandoned her when she was born although she was in the same Clan (her mother was a med. cat). She grew up with no mother but a father....
app.: http://www.free-mobile-wallpapers.com...
mate: open
Other: will soon have kits needs a mate!!!!!!!! How about we have a bit of forbidden love.......

name: Thornstar (formerly Thorntooth)
gender: Male
Rank: leader
personality: Courageous and encouraging. He is a valiant fighter and never takes a life of another cat. He has never needlessly gone into battle when he thought the reason was wrong.
history: Regular life.
app.: http://www.animalsden.com/pics/africa...
mate: none
Other:

Mod
I'm not deleting cats of people that are active, but if you want to, which I am going to do, you can edit them to make them better.

Name: Frostlight
Age: 39 moons
Gender: Female
Rank: Warrior
Personality: Frostlight is a soft-spoken warrior. She is quick to forgive and slow to anger. Her easy smile is sure to calm even the most angered cat. She has a certain airy feeling to her that tends to melt the icy feelings around her. Some people make jokes that if Snowlight could, she’d melt all the icy, snowy things in the world, figuratively and literally. She has a very optimistic outlook on life. She is the kind of she-cat to think of the glass half-full than a glass half-empty. She knows the sun is still shining when she closes her eyes. She is loyal to her clan and is a good addition to her clan. She is an ok fighter, and an even better hunter. Frostlight is sometimes called the clans mamma, because of her loving, caring, and calming nature. She can give cats smiles when they need it most.

Likes- Frostlight LOVES grass. No one really knows why. Maybe it’s because of her love for happiness and fun, and she likes to play roll in it. She loves new-leaf, and the sun shining brightly warming her fur. She can always be found laying on a warm rock in camp, when she isn’t helping her clan. Snowlight’s favorite foods are voles. She likes to climb trees, and have races. She can always be found playing with kits in the grass on a sunny day.

Dislikes- Frostlight HATES frost(ha ha!). She doesn’t even like the cold. She thinks it makes moods negative and hearts cold. If there is one thing Snowlight can’t stand, its negativity. She hates bullies, and mean apprentices. She doesn’t like any careless or worthless fighting. She thinks it is pointless and stupid. Frostlight would much rather work things out in a reasonable fashion. She will only fight if there is a viable reason to fight, other than that, you won’t find her fighting.
Appearance: 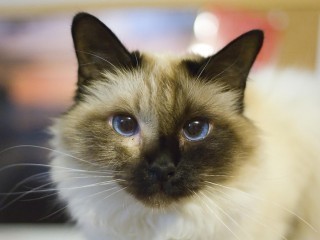 Frostlight has soft, feathery fur. It’s white and is always well-kept, not one fur is ever out of place. Her face is more of a cream-ish color. She has splotches on the right side of her face that are a very light brown, but only around the bottom of her eye and on her forehead. On the left side, the dark brown splotches cover that whole side of her face. Her muzzle and nose is black, as well as her ears. Her ears are sharp and rounded, but very small. She has long whiskers that are an unnoticeable white. Her eyes are frosty blue, with brown flecks in the center, and are always shining bright.
History: Frostlight’s mother was a soft-hearted and kind cat, much like herself. Her father was another story. Her father was one to jump into a fight, and wasn’t afraid to kill in cold blood. Her mother and father loved each other, and their opposite personalities complemented each other. Ever heard of opposites attract? She has two brothers, who one was like her father, one goofy and weird. They were a happy family until her father got exiled for killing another clan cat during battle. Her whole family knows it was an accident, though. Her mother worked harder to love them for both her father and herself. Her brother, the one like her father, became very distant and more violent. Her other brother and herself did all they could to help, but it was in vain. Her brother killed himself as an apprentice. They lived on though, and her mother is still alive as an elder. Some people say she goes on walks and visits her old mate.
Kin: Russetfeather (Mother), Hardleaf (Father), Sparrowfeather (Brother), Dogpaw (dead bro.)
Mate/Crush: Open
Other: None

Mod
Are you going to keep the Family or no?

Mod
Yes, I will keep the family. Actually, I haven't made any of the family in my other group. XD 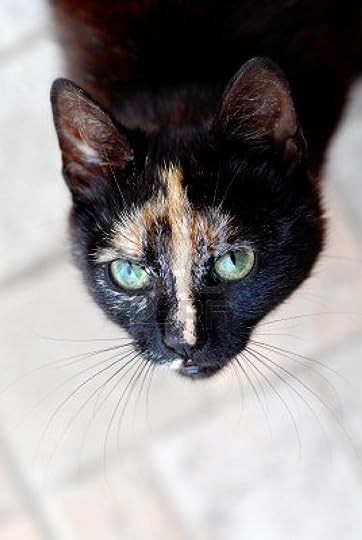