Name: Burn
Age: 20
Gender: Female
Crush/mate: None
Personality: Quiet, scared
Appearance: Blue scales, feathered wings and tail, smooth horns
Other: Wears a gas mask (don't ask me where she got it) because she severeleburned her face when she was young and is scared to take it off

Name: Forever And A Day (Ever for short)

Age: She doesn't know; a rough guess would put you at 5

Crush/mate: too young for a mate, you can try for a crush but you won't get far

Personality: Acts all tough, but is really lonely and fragile and just wants a family

History: Outside the rocky cave, winter's ferocious winds howled, but the sloping limestone walls blocked enough of the gale to protect their precious charge; a smooth green egg that lay nestled in a nest of pine boughs and gently glowing coals. A sharp crack sounded over the whistling wind, and a tiny punture jole appeared. Bit by bit the miniscule baby dragon worked its way out, gnawing on the eggshell and punching through its thin birthsack. Then the emerald creature slumped to the floor, whining pitiously and trembling in the cold. Day after day it waited, weakly cleaning itself with its rasping tongue and wishing its mother would come back. She never did. The seasons turned spring and the little dragon grew in strength and smarts, enough to realise that it was female, and to give herself a name. She decided on Forever And A Day, because that was how long she had waited for her nonexistant mother. Ever also learned to hunt, to fly(not without scrapes and bruises), to sustain herself, and eventually she left her dreary cave to wander in the world. What comes next, only the Fates can decide...

Name: Shine
Age: 90
Gender: Female
Crush/mate: None
Personality: Talkative and friendly. WILL NOT SHUT UP!
Appearance: 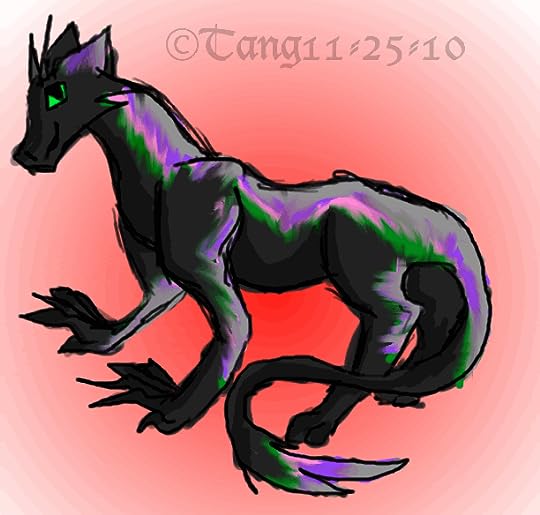 Other: Scales glow green, pink, purple and silver in sunlight. Yes, she DOES HAVE WINGS, I just forgot them in the picture >.<

Name: Josef
Age: 120
Gender: Male
Crush/mate: None
Personality: Silent, never really speaks
Appearance: http://www.google.com/imgres?imgurl=h...
Other: Josef is not a robot, he just looks like one.