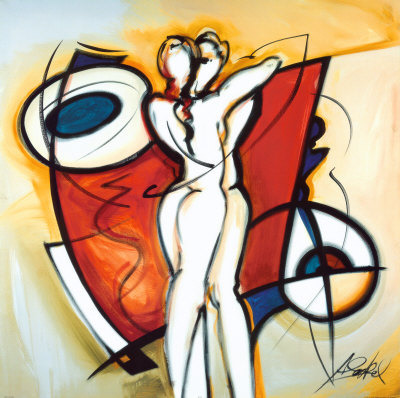 interesting . . . it kind of reminds me of an artwork we have. I can't remember the name of it. I will check it tomorrow when I go in. 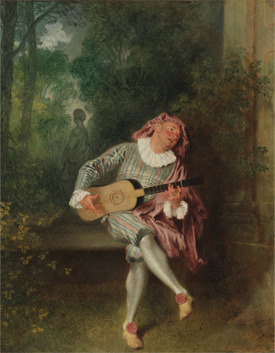 Mezzetin, whose name means "half-measure," was one of the stock characters of Italian commedia dell'arte. He could be a deceived or a deceiving husband, and could serve his master with devotion or take bribes and betray him. This representation of Mezzetin in his moment of ardor has the effect of a moving performance on the stage. The statue of a female figure with its back turned may imply the reaction of Mezzetin's unseen listener. The painting, usually dated 1718–20, belonged to Watteau's friend Jean de Jullienne. The artist's treatment of the silk costume and the garden background influenced Thomas Gainsborough (1727–1788), who knew paintings by Watteau in British collections. 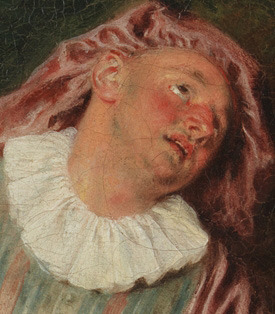 I love the pastel colors they use in the painting. It has a drream-like quality to it. Thanks, Heather. 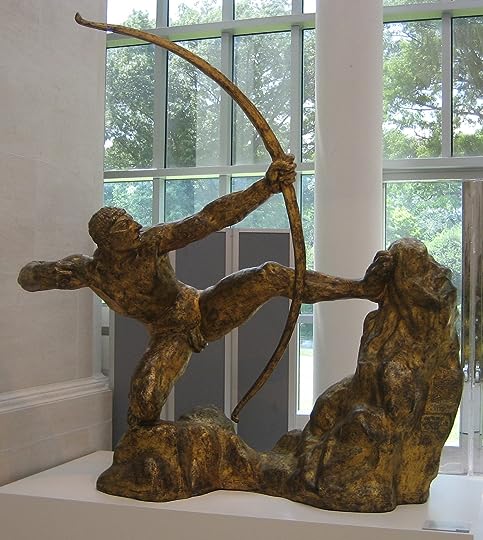 I love the physicality of this sculpture of Hercules the Archer. I looked at the detail and he has got his foot on the head of the female figure poised fromtwards, and it looks like he has got his knee on someone facing downward. Amazing!

I like trees. I like pictures of trees on paper. Beginning in 1826 with Jean-Baptiste-Camille Corot's Clump of Trees at Civita Castellana, pen and brown ink and graphite with white heightening on brown wove paper, at the National Gallery in Washington. 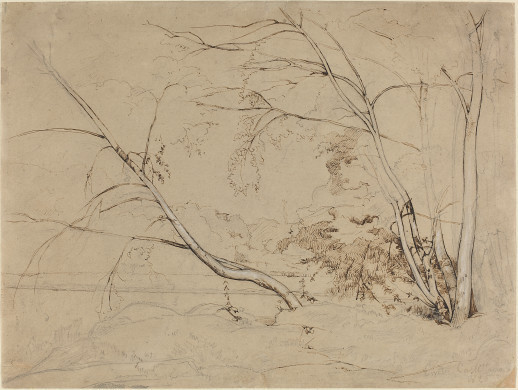 All the rest of these are from the Met's drawings collection too. René Ernest Huet's A Fir Tree in the Forest of the Landes, Aquitane, 1909, black chalk, graphite, pen and ink, and white wash on brown wove paper:
[image error]

Bourdelle is a new one for me. 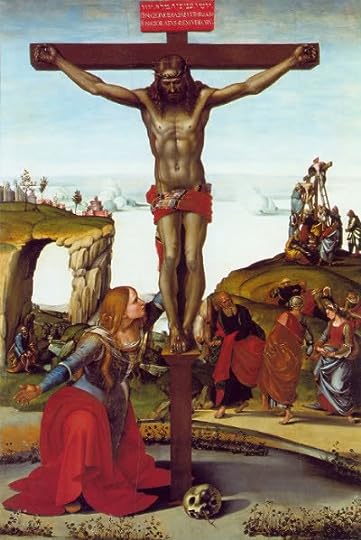 Gimme some Luca Signorelli!
If you're ever in Orvieto his work in the cathedral is huge! 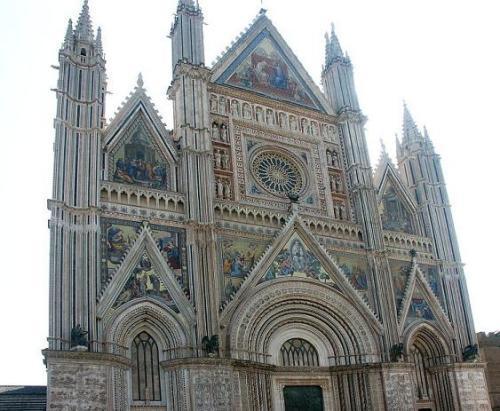 The cathedral is stupendous also.. 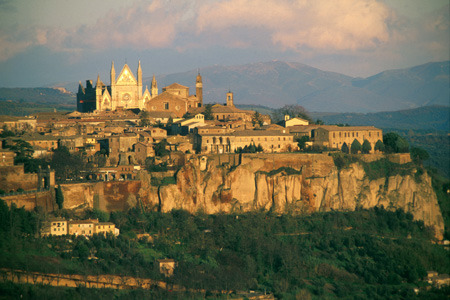 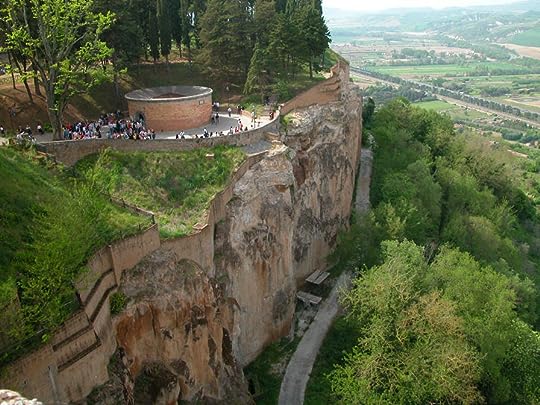 Wasn't this "well" so interesting to see? How amazing to witness what was done for water and to avoid attack. It's fascinating to see what people accomplished for the pope and their own survival. I'm blessed to have traveled so much!

It can be a big schlep. Travel is a lot of work, too! 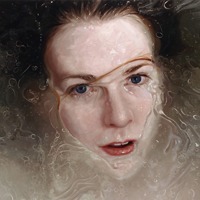 "When you focus on something that is really important it creates an altered state of reality and it becomes a sort of trance," says Monks.
"And that is what happens to me as well when I paint these. Neurological books say that people like art that doesn't make sense initially but that coalesces after a moment of confusion. You get the 'aha' moment when things crytallize. And, when you push that, and get the reality right up against abstraction, there is just enough mystery and just enough recognizable reality for someone to get fixated."
"There are easy kinds of facial expressions but I want to get that moment that happens between two states, the emotion that is not quite formed yet," say Monks. "There is a level of ambiguity to them and this helps to create a narrative around what the person might be experiencing, but I want to keep it kind of neutral so I don't fixate on just one kind of experience."

The Collector says "Alyssa Monks paints vapors, drips and bubbles so precisely that you are drawn to her surfaces to see how she has mastered this evanescent illusion. I think there is a combination of awe and suspicion mixed into your curiosity because on some level you would like to see her fail at this legerdemain. But she doesn't. Harder scrutiny only gives you greater pleasure. There is no weakness. There is no dismissing her paintings." Eric Fischl

These painting look so life like, at first I thought they were photographs. She does an excellent job in evoking what she set out to do. 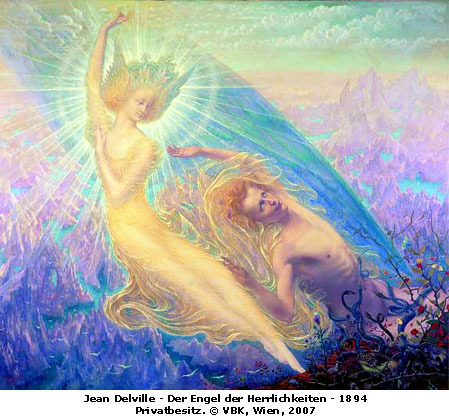 The Kiss of the Saphinx
Jean Delville

“The essential attribute of symbolist art consists in never fixing or directly uttering an idea as a concept”, wrote the poet Jean Moréas in 1886

Symbolism's exponents were linked not only by the artistic manner of expression, but first and foremost by an intellectual attitude, in which the power of the imagination plays a key role. Symbolism is informed by the constant confrontation with the boundaries between reality, dream and doubt; with endurance and decay, with redemption and downfall. A close interconnection of poetry and the visual arts, the tendency towards the Gesamtkunstwerk – the total work of art – also characterize symbolism, which embraces painting, jewellery, works on paper, the decorative arts and furniture. Costly materials in the most consummate and elaborate workmanship, an elegant, linear language of forms and a melancholy and dreamy overall mood mark this art trend, which has such a close affinity to art nouveau.

its very celestial looking and I love the vibrant colors being used. A very dream-like quality, very nice, Heather.

Franz Marc was born on February 8, 1880, in Munich, Germany. He studied at the Munich Art Academy and traveled to Paris several times where he saw the work of Gauguin, Van Gogh, and the Impressionists. With Kandinsky, he founded the almanac "Der Blaue Reiter" in 1911 and organized exhibitions with this name. He was a principal member of the First German Salon d'Automne in 1913. At the beginning of World War I, he volunteered for military service and he died near Verdun, France, on March 4, 1916.

Franz Marc was a pioneer in the birth of abstract art at the beginning of the twentieth-century The Blaue Reiter group put forth a new program for art based on exuberant color and on profoundly felt emotional and spiritual states. It was Marc's particular contribution to introduce paradisiacal imagery that had as its dramatis personae a collection of animals, most notably a group of heroic horses.

Tragically, Marc was killed in World War I at the age of thirty-six, but not before he had created some of the most exciting and touching paintings of the Expressionist movement.

Just in time for Halloween!

Franz Marc was born on February 8, 1880, in Munich, Germany. He studied at the Munich Art Academy and traveled to Paris several times where he saw the work of Gauguin, ..."

Love the Tiger
as usual, war's insanity deprives us of what Marc could have done over time

I like Franz use of colors they are almost surrealistic to me. 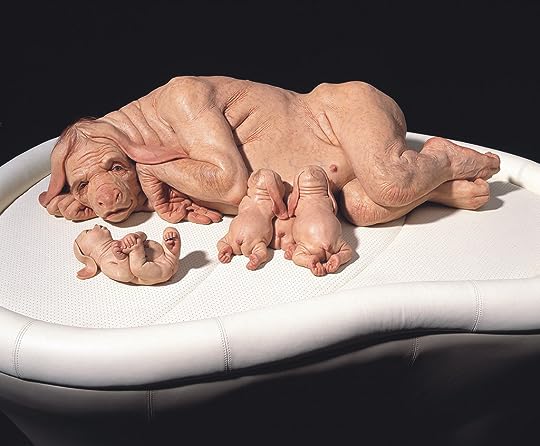 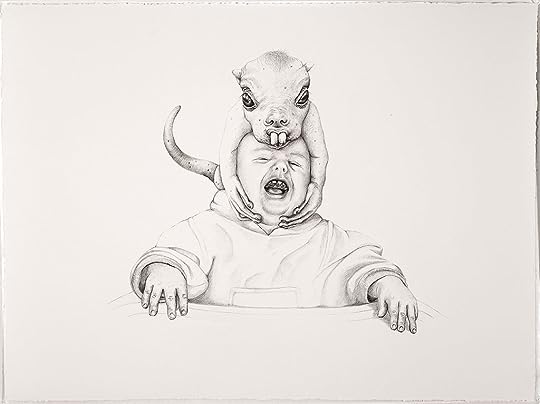 the patricia piccini the second one is certainly scary looking.

Apologies for being slow and behind things. Story of my life. Regards the Jean Delville 'The splendour of the Angel'.
'The kiss of the ? Saphinx'?
Ich habe keine ahnung.

It makes me think of photographer Phillip Toledano's "baby suit" from his "Hope and Fear" collection.
[image error]

a favorite from "days with my father"

I wouldn't have guessed that covering yourself in babies would make you look like a Yeti, but it does.

Oh lord. There were days in my youth when I felt like that. Thankgawd they grow up.

Please tell me, at what age do they grow up?

Reality starts to dawn when their own kids give them trouble.

I remember those days all to well. And I have just the one. 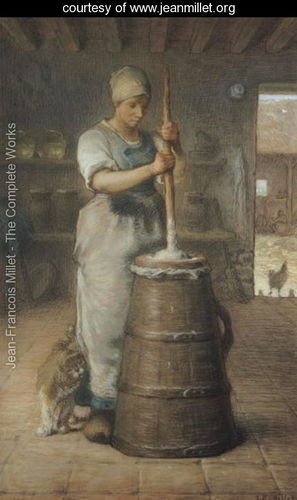 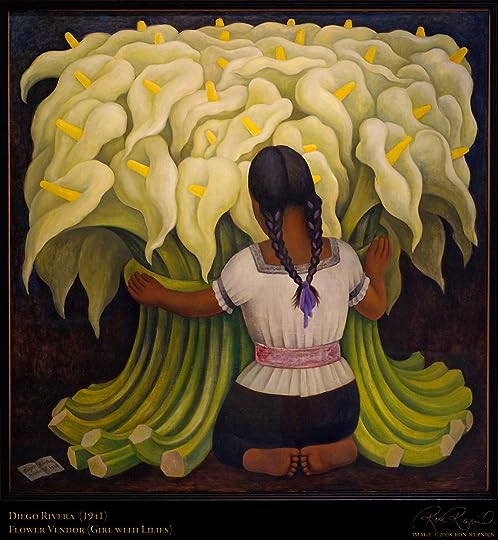 I love the colors Diego used in his painting. Are the flowers anthuriums? That is a huge amount of flowers.

I was leaning towards that observation also. Thanks Ruth

I saw many posters of this artwork in restaurants in CA. I love the flowers and the young girl but I find how Rivera depicted her feet interesting. I feel as though her thighs are side by side, but then her feet can't really be toes to toes-- right? 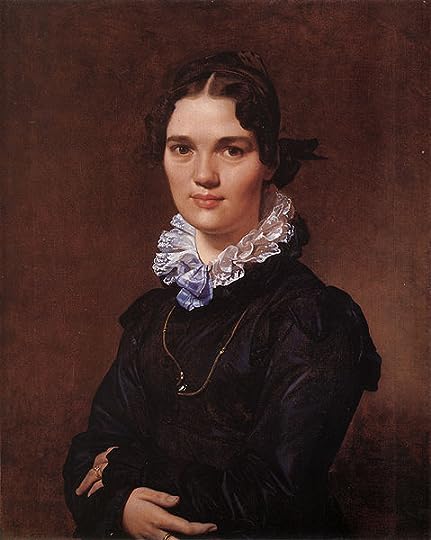 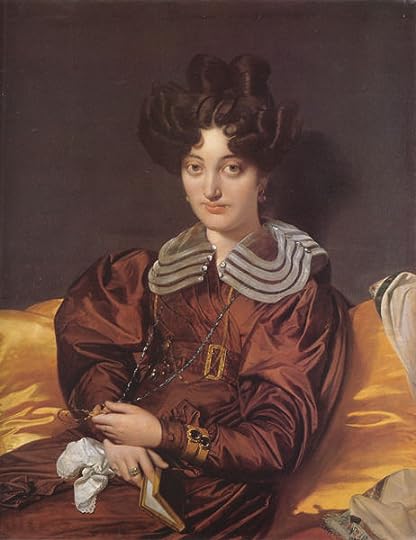 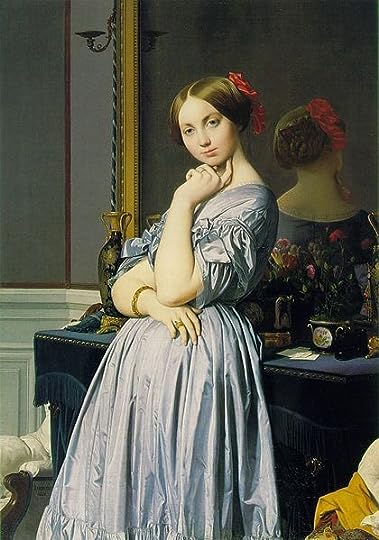 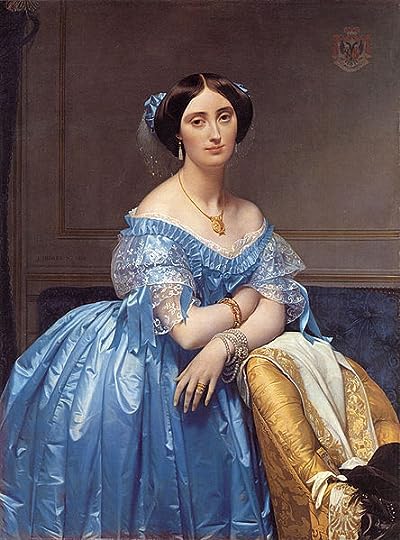 Carol wrote: "I saw many posters of this artwork in restaurants in CA. I love the flowers and the young girl but I find how Rivera depicted her feet interesting. I feel as though her thighs are side by side, but..."

I find those feet endearing.

Carol, I came to this thread just to post the Flower Vendor and was surprised that's it's here before me :)

is that a book in the left corner?

Possibly -- if you look closely at it there are 2 lines across -- the first line I believe is his first and last name but I can't make out the second line.

I was wondering about the flower vendor also, she must have been very flexible.