I kept my "I love boobies" bracelet in my pocket...

I also looked up bad words in the dictionary. You can take mine away.

Lame. If they spent some of that energy on education my 20 year old step son would be able to write in complete sentences.

The first letter after the article has it right - some of it is silly (not to mention steps on free speech rights) but some of it only SEEMS silly from outside the classroom. It's not that these things are "bad" in and of themselves, it's just that they're enthusiasms kids have which waste a lot of class time. You wouldn't believe the amount of time that gets wasted on things like those little rubber bands kids are wearing around their wrists and the Tech Decks or however it's spelled, the little skateboards. But those are nothing compared to kids trying to sneak in texts and show each other pictures on their cell phones during class. When they're banned, it cuts down the time teachers have to spend stopping and redirecting attention. I know we had the same kinds of things too, but I don't remember us bringing that stuff to school so much.

About ten minutes after I read this, I got an e-mail from our principal that the school has banned Silly Bandz. This is a charter school with uniforms & all, so it's not so odd to ban "jewelry."

Can you imagine how bad it must have gotten for them to take that step? I'm picturing the restaurant scene in Being John Malcovich, only with meeps.

Now it's "giggity," you know, like Quagmire. It has the added benefit of referring to something a bit naughty!

Silly Bandz, is that what they're called...my neice is in 6th grade and loves them and she doesn't go to a school with a dress code, so I'll have to ask her if the teachers get annoyed by them!

I went to first grade with Adam Lefevre (a Broadway, TV, and film actor. I'm certain he doesn't recall me or this incident.) He gave me a pocket knife for my birthday -- brought it to school. The teacher took it away from me. Funny how I would remember that.

What are Silly Bandz?

We had those jelly bracelets. The different colours meant different sexual acts. If a person broke your band, then you had to perform that act on that person.

It was hip, edgy, and cool when I was an 8th grader. I never had any of those bracelets though. My best friend at the time did, and she claimed a dude broke her black bracelet, which meant she had to give him a blow job, but I don't think she did.

A lot of guys wanted that from her. I always hella jealous. Actually, I told a boy that I liked him, and he said he didn't like me because he liked her, and then asked me for her number.

My niece went off to kindergarten and came back having learned a new word, "booty." From that day on it was booty, booty, booty.

i got a shirt banned once. it was an aerosmith shirt from the night in the ruts tour. it has the N and the R crossed out and replaced with a drawn in R and N. it said "Right In The Nuts"

this shirt got banned and i got send home

Anyone else spend time in California and have an "In & Out urge" bumper sticker?

If we could get into the dress code, in my high school, we couldn't wear shorts or skirts or dresses that were 3 inches or more above the knee. Well, one girl decided to wear some booty shorts, but she wore some nude tights...what's the difference?

You ban an item, suspend a student.

Mod
And...the crazy Koran burning Pastor caused a school to ban something: "last year Jones he [sic] put up a sign declaring "Islam is the Devil" and sent children from his church to their public schools wearing T-shirts with the same message. The children were sent home, the Gainesville Sun reported."

i remember pogs. i had a collection of those, i think i even still have some spinners with cool edges. my school banned south park. at the beginning of the school year, the first year, when i was 12 i think, all self-bought school supplies were inspected for appropriateness. i brough i knive into school, because i thought it was cool to have a knive. i wouldn't have been able to use it though, the edge was old, blunt and rusty. no one ever caught me with it.

in high school my son was told he couldn't wear his lynryrd skynyrd concert tee shirt because it had the confederate flag on it and that stood for racial oppression. he told them "maybe 140 yrs ago it did but now all it stands for is southern rock". he was told to turn it inside out or go home. he came home. i took him to dairy queen

Kevin "El Liso Grande" wrote: "in high school my son was told he couldn't wear his lynryrd skynyrd concert tee shirt because it had the confederate flag on it and that stood for racial oppression. he told them "maybe 140 yrs ago..."

Kevin, you're my new hero. When you took him to DQ, was "Free Bird" playing somewhere in the background?

No dancing? That ain't right...

six times for not wearing shoes (I didn't like shoes)

This is awesome. I wouldn't wear shoes just about anywhere if I could get away with it.

I was "asked to leave" one high school (I said ok, I'll leave) and expelled from another. They had their reasons, though. I was a little shit.

reply | flag *
message 26: by [deleted user] (last edited Sep 10, 2010 05:56AM) (new)
Sep 10, 2010 05:55AM
Goodness I was such a goody-two-shoes at school. The only time I can remember getting in trouble was when I was eight years old. I told the teacher to shut up because she read out my spelling results to the whole class. I was dragged up to the head-masters offices blubbering, I thought I was going to get the cane. That's it for me.

i got kicked out the very last day of my senior year for hitting the athletic director (he was wearing a suede suit) with a water balloon (aimed at some freshman but he stepped around the corner at a bad time) and got expelled thus missing all my necessary finals (actually i only had one i needed - government. besides that all i had was advanced PE, art and school newspaper staff. i was the staff artist). i went to the parking lot and got drunk on beer (on beer in a plastic jug that came from somebody's keg) and proceeded to back into my buddies car (way nicer than mine). i snuck back in to school after lunch and took my government final (got a C-) during which my teacher said "thought you got expelled" to which i replied "if i did how would i be here?"

no, hitting him was an accident. he was not the intended target. suede suit was just some color commentary

suede suits should be banned

Kevin "El Liso Grande" wrote: "no, hitting him was an accident. he was not the intended target. suede suit was just some color commentary"

yes, suede is a color. it is in the designer crayola set. let's see....they have: suede, corduroy, felt and taffeta.

I saw that on TV... Tulle Academy.

This post reminded me of my grandmothers love of tole. It's a painting style, not a color. :)

Nana did a lot of stuff like this (this one isn't hers). 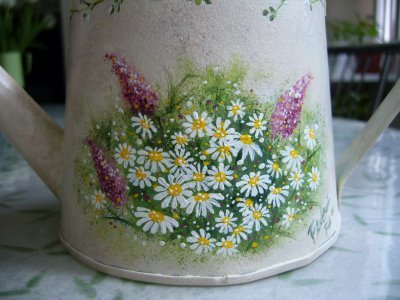 I sure would get such pleasure everyday if I owned that!