Mod
Here are some possible ideas for discussion.

1. How did Napoleon's Military genius manifest itself at this time?

4. What miscalculation on the part of France's enemies gave Napoleon his biggest opportunities?

6. Why was Napoleon's decision to proclaim himself Emperor a good or bad decision?

I am looking at this from the Swedish POV - I hope this is of interest.

In 1804 the Swedish government broke diplomatic ties with France after the execution of Louis-Antoine-Henri de Bourbon-Condé and concluded a convention allowing the British to use Swedish Pomerania as a military base against France, in exchange for payments. On 9 August 1805 Sweden joined the Third Coalition and on 31 October 1805 declared war on France. 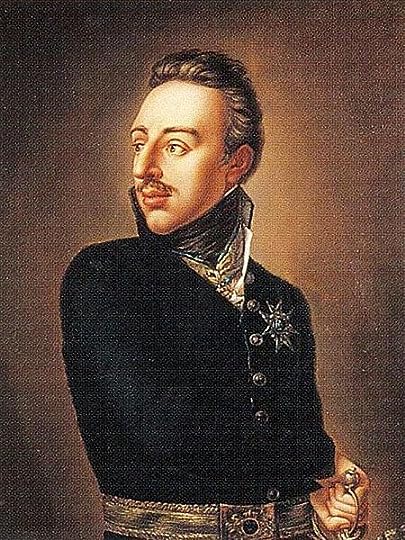 This was the Kingy-wingy at the time! Gustav IV Adolf. He was subject to a coup d'etat and abdication due to the loss of Finland and died in Switzerland.

Mod
It is not that well known that Sweden was a potent military power for hundreds of years and, at one time, ruled over big chunks of what is now Germany, Poland, Russia, Denmark and Norway, to say nothing of Finland.

Looking at Gustav IV Adolf's portrait, it's not hard to imagine why they lost most of it.

Was there any other huge sea battles other than Trafalgar during the Napoleonic War era?

Mod
Silvana wrote: "Was there any other huge sea battles other than Trafalgar during the Napoleonic War era?"

Absolutely! Follow this link for a list and further links to all the Naval actions during this period: http://en.wikipedia.org/wiki/Category....

Mod
Trafalgar was the most important, but yes. I personally would say the other vital one was the one at the mouths of the Nile.

Ah yes, they even made a special medal for that.

Currently reading The Far Side of the World and I don't see much historical references thus far.

Interesting though, to see the effects of the Napoleonic wars on the other parts of the world, inc. the Americas.

Mod
In the book, the ship is an American ship not French as in the movie. I guess they didn't want to make the U.S. audience angry which was a really stupid decision, IMHO.

O'Brian usually focuses on the people rather than the history. I found it really increased my understanding and enjoyment to read the series in order and looked elsewhere for a time-line to see what was going on as Aubrey and Maturin did their thing.

Consider reading the Horatio Hornblower historical fiction series by Forester. Seapower was how Great Britain controlled the periphery of Europe and kept Napoleon from invading England. The British spent about four percent of their GDP on the Royal Navy and little on the army. They "bought" allies through military assistance payments (sound familiar?). Meanwhile Napoleon impoverished France and its manpower through incessant land war, which is very expensive and wasteful (sound familiar again?). The Royal Navy was continuously at sea, including blockading the French and other European ports. They had a huge amount of cumulative experience as a seapower. The French ships in contrast were confined to their ports by the blockade. Not good out on the water, they lost most of the time to the Royal Navy.
Paul A. Myers

The problem I have with Forrester is that I often feel he's writing for a younger audience.

The Far Side of the World (other topics)