And I fall,
Faster than I expected.
I'm risking it all,
Just to be respected.

It's not as if I have wings.
I'm waiting to be caught.
But whose willing?
Who will help me fill my lot?

And suddenly you're their.
Holding me in the air.
I don't understand why or how.
All I know is that you don't bow.

You never collapse in fights.
You'll catch me when I fall.
And suddenly we're in flight;
everything seems small.

I feel the heat of the sun,
I taste the salt in the air,
I hear the sound of waves
smashing the cliff edges.

I smell the trees around me,
I see the the birds flying by,
and i want to become one,
I lift my foot up and over and,
I'm flying.

I slowly walked outside,
My heart was beating fast.
My wings outstreatched,
wide.

The rythm started,
One wing after the other.
I was suprised the wind supported,
me.

My face stung,
With raindrops that fell.
I stuck out my tongue.
Ack!

I turned on my back,
Falling fast.
I could see the pitch-black,
sky.

When I got the bug,
out of my throat.
I woke.

Just a couple typos: supported has two p's in the second verse, and i think you mean 'pitch-black' not 'pick-black'...

thank you. Yea, I don't think it's my best, but I did like the concept anyway...

Icarus, Icarus! What have you done?
Glided and soared too close to the sun,
the wax on your wings has melted away
and you’ll not fly again today.

Icarus, Icarus! Why didn’t you heed
your father’s advice in this perilous deed?
Daedalus warned you again and again
Flying like birds is a dangerous game.

Icarus, Icarus! Flapping your arms
Won’t keep you aloft and safe from harm.
And the labyrinth’s secret will never be known
Now you dive to the sea, to drown all alone.

Icarus, Icarus! The lesson we learned:
flying’s for eagles, sparrows, robins and terns.
If men are to fly, up there in the sky
helicopters or planes, are the things to try.

reply | flag *
message 13: by [deleted user] (new)
Sep 10, 2010 02:19AM
It has just occurred to me that some may not know the story of Icarus. If you put 'icarus' into a search engine, you will reach the Wikipaedia site which gives the outline of the myth. Enjoy!

WOW! I absolutely LOVE, LOVE, LOVE IT, David!!!! I know that myth so it was awesome reading your poem! You did a wonderful job! I could see everything in my mind.

It was. You did a wonderful job.

You'll never fly unless you try.

Life can leave you low or take you high.

Sail the line of gray, it's never black or white.

Always reach for the stars it's really quite a flight!

Some days you may only flutter, but with persverance you will soar!

Loved it David, i have always loved the story to :]


In deep,
A world of seventeen,
A wish one time,
And God is my imaginary friend.

This world is filled,
With colourful wonder,
But shadows of fears,
Lurk behind your eyes,
And security is felt,
With teddy close at hand,
Fear and loneliness,
Dismissed by a hand much bigger.

Trapped now,
In a world more beautiful than ever,
Bound in vines,
Cloaked in fog,
It rains down heavy,
Holding you down,
Trying to stand tall,
Trying to capture life.

In a moment,
Quiet as a silent movie,
Dresses torn,
Make-up smeared,
Teddy in hand,
Tears are spilt.

The sun has set,
More seven than ever,
I dream I could fly.
The sky’s too high.

The higher you fly,
The farther you fall,
And in that moment,
I fell so far.

It hurts to live,
Past in present,
Knowing,
That’s not how it’s supposed to be.

Still hiding then,
In a world of seventeen,
With the castles and kings,
And fairytale things,
Of being seven.

Seven chapter books and giant swings,
Seven pirate hooks and plastic rings.
Seven plus two and learning to fly,
Seven new shoes and that’s not even why…

More than ever,
I want to be seven.

((sorry it's late I've been tearing it apart several times for Writer's Craft Class... and apparently it's still not done... :( ))

This is an interesting take on the subject, Amanda.

If I Could Be A Bird


Oh! If only I could be a bird
And fly up high above the world
With all its trouble and its woe
And travel where the wild birds go.

Soaring up into the clouds
Where every freedom is allowed
No debt to pay, no work to do
Up there in the soaring blue.

Thermals rising taking me
Above the land, beyond the sea
Where all my troubles drift away
And I could just live for today.

I'd rise up high, above it all
With everything below so small
And live another, better way
Forget the cares of yesterday.

We fight and struggle, tired and lost
For what? I ask, and at what cost?
We're worried, weary it's absurd
Oh, if only I could be a bird.

Thanks Stephanie. And I just realized I haven't done my reviews for any of your guys' yet... how selfish of me...

Anyways, here they are now... Roll out the red carpet, here are Amanda's reviews. :P

Who's first? Stephanie
The flow is a little awkward, and that might be because it sounds like you forced it to rhyme. There's a couple rhymes that don't feel like they fit with where the piece is going. Absolutely stellar idea though, I love it, and I think you could have made a larger, more profound statement by stepping away from rhymes.

Kimathy
Very metaphorical, and I got this feeling you were sitting in the trees of a deserted island... maybe my imagination's a little too creative somedays. It flowed wonderfully, the rhythm flowing right into the other. It was a common, over used idea for the theme of flying, seeing birds and wanting to fly, but you did an excellent job of playing it up by painting a picture along with it. awesome.

Anime Lover
Ahahaha... that was surprisingly funny. I love how it's a dream in the end, and again, and over used idea of dreaming of flying. But it wasn't too bad, you added a unique spin on it by turning it into a comedy of sorts, adding an amusement factor. I love the way you broke up the lines, adding extreme emphasis to the words "me" and "sky". Excellent job!

Kristen
Hmmmm.... it was an interesting take on flying, you took it more as a fleeing than a flying. That's alright though, to each his own, and the way you broke up slightly unfinished lines added a feeling of breathlessness to the piece, making your interpretation of the word more dynamic. It also has a sense of panic to it, the way the ideas shift suddenly and unexpectantly without a lead up. I'm not sure I'm fond of the style you used, but it seems to work here. Great job.

David
Oh.... Icarus!!!!! I maybe sort of love you now! It's a perfect fit for the piece, and you do a great job retelling the story in a poetic manner. The flow and rhythm were all great and consistent, but if you're going to keep them consistent, you need to keep your rhyming pattern consistent too, which you sort of lost towards the end of the piece. Still, it was phenomenal, and other than the slight rhyming issue, completely original.

Maggie
Hmmm... the lines feel mismatched, they don't fit together nicely like a puzzle, the pieces are scattered. They feel like a list of profound quotes listed one right after the other, and though they have the same theme... they don't really go together. I didn't like ti for that reason.

Then there was mine... which isn't really fair if I critique myself, although there are a lot of nasty things I could say to myself about mine.

And last but not least, Jan.
Wow.... that was absolutely great Jan! The rhythm and flow were spot on and the rhyming was consistent and perfect. It reminded me of the sea, and the seagulls. :) I can't think of anything you could improve. The idea was common, but well done.

Since we're three days over the deadline, I'm going to call this week's topic over on behalf of Al, and post the polls. Please visit and vote for your favourite please!!!

Ok, so I set the date wrong on the poll by accident... so it will be up tomorrow. ^^ Sorry.

Thanks for the review Amanda, I kinda imagined her on a cliff, and jumping over the edge. Suicide :]

Kimathy wrote: "Thanks for the review Amanda, I kinda imagined her on a cliff, and jumping over the edge. Suicide :]"

Ok, so something a lot more graohic than I came up with. XD Still, great job.

The poll isn't showing up right in the polls section...

I know... It's bugging me... It's failing miserably. I shall try again and post a new topic for this week.

POLL FOR POETRY IS NOW UP! Sorry for the inconvienience. It won't show on the poll page for some reason.

Congratulations David! You are this week's winner! 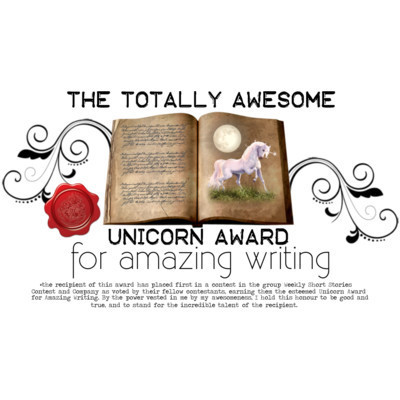 Here is the Unicorn Award you receive for winning that you can post to boast your awesomeness wherever you so choose.

Blimey! What on earth is this? Is this like a gold star? When I was at school all those many years ago they never had gold stars, but my grandchildren seem to get them every other day. Thank you very much.