There is nothing eerie or particularly unusual about an artist copying the work of another artist. Copying was (maybe still is) one standard technique of study. I am just now reading about Van Gogh's art education and it seems that he was almost entirely self-taught with some visits to studios of artists who he met and became friends with to round it out. He did not attend an art school (at least not yet in my reading). He began to study art when he was about 26 years old.
Jim wrote: "I never had any idea that van Gogh copied anybody but the website certainly shows how much he did copy Millet - it's kind of eerie"

Oh my God, I really managed to pst a picture! Thanks to Heather and Monica. This one is by Andy Goldsworthy and is pure autumn feeling for me.

I love the work of Andy Goldsworthy. Pure magic. 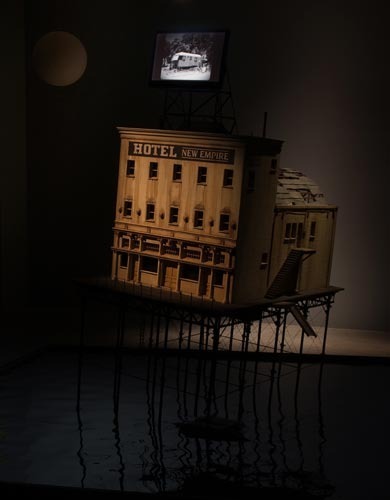 At LA Louver Gallery right now. I'm hoping to get up to the show.

Can't make it out. It looks like Cornell to me.

Michael McMillen does small sculptures and installations. None of the preciousness of Cornell. More like the Keinholzes if anything. Here's a link to some of his work.

A few years ago he did a complete, full-size walk-through installation of a grungy old garage, filled with a lifetime accumulation of old oil cans, grime-covered tools, funky old radios, etc. I saw it. I loved it.

Antje wrote: "Oh my God, I really managed to pst a picture! Thanks to Heather and Monica. This one is by Andy Goldsworthy and is pure autumn feeling for me."

What a wonderful picture. You're right, it just feels right for the season.

I am not familiar with these artists. I really like their work. I went looking for more and found . . .

"Looking, touching, material, place and form are all inseparable from the resulting work. It is difficult to say where one stops and another begins. The energy and space around a material are as important as the energy and space within. The weather--rain, sun, snow, hail, mist, calm--is that external space made visible. When I touch a rock, I am touching and working the space around it. It is not independent of its surroundings, and the way it sits tells how it came to be there." -- Andy Goldsworthy


Michael McMillen --
I think these are images from the "garage" at LACMA.
http://collectionsonline.lacma.org/mw...

Thanks Antje and Ruth!

Love Andy Goldsworthy. Here's Roof, his 2005 installation at the National Gallery in Washington. 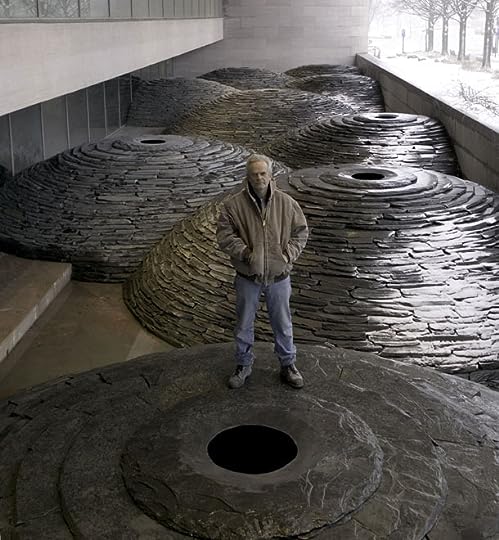 Very cool! It should be permanent. Is it?

I just finished a short book on Sargent and this was one I'd never seen before: Dr. Pozzi at Home, 1881 (Armand Hammer Collection). Dr. Pozzi was a French gynecologist ("inventor of the technique of bi-manual examination of the ovaries"), which somehow makes him in his flamboyant red dressing gown (echoes of portraits of popes and cardinals) more amusing.

Monica wrote: "Very cool! It should be permanent. Is it?"

It was commissioned specifically for the site - that suggests to me it is permanent, although the press release doesn't say it is. The dome form is intended to reference other domes in Washington buildings, including that of the West Wing of the Gallery ("Roof" is in the East Wing).

I'll check it out next time I'm in DC, thank you!

What a great photo of Andy standing on his work! Love his work.
I love texture. 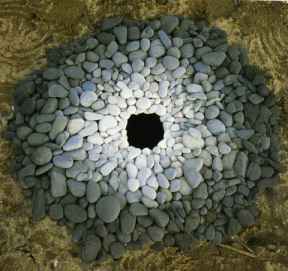 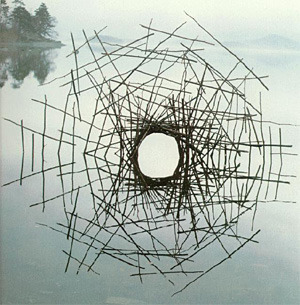 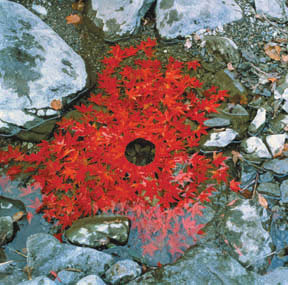 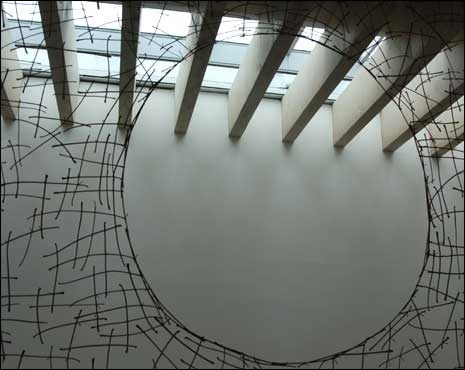 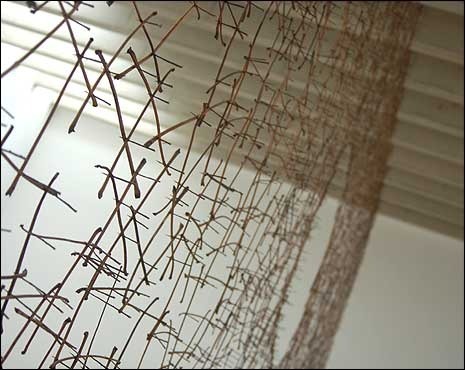 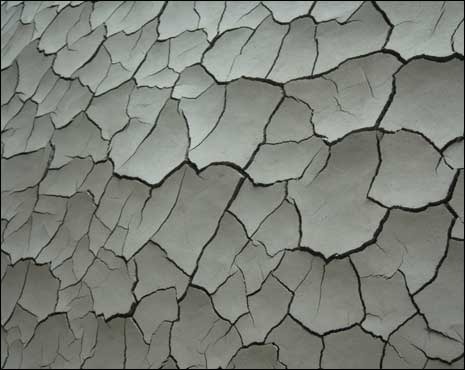 Goldsworthy's stuff is so exquisitely beautiful I want to scream. It's just remarkable.

I saw this purse (the "Guardian Angel Purse") in an exhibit at MOMA last year.

I saw Charles DeMuth's 1927 work "My Egypt" on the cover of a book today and was reminded that I really, really like it, and a lot of other industrial-themed paintings. It's at the Whitney Museum in New York. 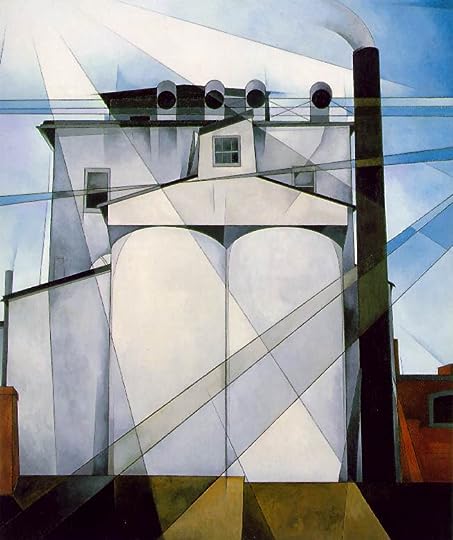 Says artchive.com: "Blessed with a private income from his parents in Lancaster, Pennsylvania, coddled in childhood, lame, diabetic, vain, insecure, and brilliantly talented, Demuth lacked neither admirers nor colleagues. He was well read (and had a small talent as a writer, in the Symbolist vein) and his tastes were formed by Pater, Huysmans, Maeterlinck, and The Yellow Book; he gravitated to Greenwich Village as a Cafe Royal dandy-in-embryo. Free of market worries, he did a lot of work that was private in nature, for the amusement and stimulation of himself and his gay friends, and much of it was unexhibitable - at least until the 1980s.

Demuth was not a flaming queen, in fact he was rather a discreet gay, but if he could not place his deepest sexual predilections in the open, he could still make art from them.

Around 1920 Demuth began with increasing confidence to explore what would become the major theme of his career: the face of industrial America. It may seem odd that Demuth, yearning for Paris, should have become obsessed with grain elevators, water towers, and factory chimneys. But as he wrote to Stieglitz in 1927: "America doesn't really care - still, if one is really an artist and at the same time an American, just this not caring, even though it drives one mad, can be artistic material."

[My Egypt] is a face-on view of a grain elevator in Lancaster, Pennsylvania, Demuth's hometown, painted with such careful suppression of gesture that hardly a brushstroke can be seen. Demuth's title whimsically refers to the mania for Egyptology planted in American popular culture in 1922, when Howard Carter discovered Tutankhamen's tomb. The visual weight of those twin pale silo shafts and their pedimental cap does indeed suggest Karnak.

But Demuth may have had a deeper level of intent. His title connects to the story of Exodus. Egypt was the symbol of the Jews' oppression; it was also the starting point for their collective journey toward the land of Canaan, the forging of themselves as a collective and distinct people. An invalid in later life, Demuth was "exiled" in Lancaster, bedridden in his parents' house, cut off from the intellectual ferment of Paris and the sexual-esthetic comradeship of New York. All these were Canaan; home was Egypt. Yet he was poignantly aware that the industrial America which gave him a rentier's income had also given him a great subject which would define him as a painter. From that tension, his finest work was born."

DeMuth's story - a gay American artist in Europe who nonetheless is driven to paint industrial American scenes - reminds me of Glenway Wescott, the gay writer from rural Wisconsin who also went to Europe in the 20s and became very cosmopolitan (perhaps his best known work is The Pilgrim Hawk: A Love Story) but then wrote a wonderful 1927 autobiographical novel, less known and read than his others, The Grandmothers: A Family Portrait, about his rural Wisconsin ancestors.

That's interesting. I have heard of DeMuth, but have never placed his artwork with the name. I, too, really like that painting 'My Egypt'. That 'deeper level of intent' is indeed...'deep'. Was he a religious person at all? Well versed in the Bible? Interesting.

I like Demuth. Here's the one that inspired this poem by William Carlos Williams. 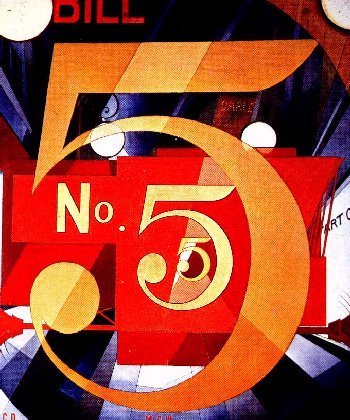 Heather wrote: "That's interesting. I have heard of DeMuth, but have never placed his artwork with the name. I, too, really like that painting 'My Egypt'. That 'deeper level of intent' is indeed...'deep'. Was he a..."

I don't know much about him, really - other than what I pasted above.

I have to admit that my 2 favorite paintings of Demuth are already up. But I love that Demuth and others in Stieglitz' group were making artwork that expressed "America." (Sorry Heather, I couldn't find anything about his faith.)

Just a few more by Demuth --

Oh, nice. I especially like that second one. I like these much more than "The Figure 5 in Gold" - that one is not so much to my taste...maybe because it looks like a poster or something.

1) He used the Lafayette Baths in New York as his favorite haunt. His 1918 homoerotic self-portrait at a Turkish bathhouse was likely set there.

2) He is distantly related to Christopher DeMuth, the former president of the American Enterprise Institute, a conservative think tank.

Thanks for all this information about DeMuth; I've liked his work since high school.