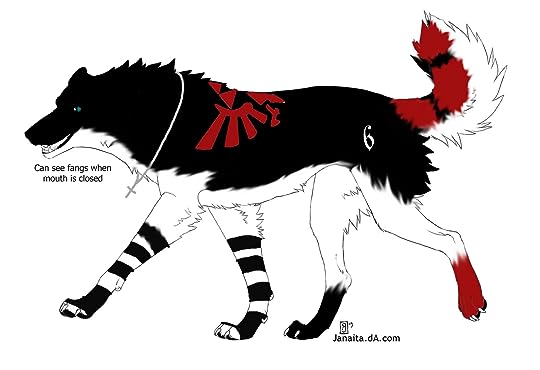 PA: Mean, aggressive and ruthless. He is a big and strong bully.
Cause of Death: Killed in a battle with Icepack
Reason for Darkforest: He worked his pup until he almost died and didnt care. He was plotting to kill the leader and Deputy so he could lead the clan. He eventually killed the deputy and no one found out.
Reason for Darkforest: His brutal leadership put him there and the innocent lives he took.
Kin:Deathbite(pup)
Crush:....
mate:.....
other:???

Demonstar(eyes)
male
Former leader
Former Nightpack
App:
[image error]
Personlity: Demonstar is evil and mean. He is very very sneaky and sly. Some dogs said that when u were around him it felt as if there was a demonic presence there. Demonstar liked to kill for fun and he killed brutally. He is not very trust worthy either.

History: When Demonstar was born into Nightpack there was already something evil about his presence. When he became an apprentice he was stronger than most and during battle training he liked to fight claws out! When he became deputy most cats questioned the leaders decision but he said it would make the clan stronger. When the leader mysteriously died surprisingly no one suspected Demonstar(eyes at the time). When Demonstar became leader he as brutal. He killed his warriors when the questioned his decisions and kits were trained harder than apprentices. Demonstar was eventually killed by a falling tree that took all of his lives.
Kin:he killed most of them
Crush:Dont even try
Mate:none
other: He got his warrior name Demoneyes because when he grew angry his eyes went completely black and he was unstoppable/unhurtable/unkillable!