note: This topic has been closed to new comments.
43 views
Archives > Prophecy


What we have to start it:
-Hunters -> sick
-> still need to come up with a better name than "The Disease"

"The Disease" is uber original -.-

Mod
Myrtle: was sacred to Aphrodite and Demeter both.

Mod
You should talk to Carter, he's Aphrodite.

Mod
*nods* but these are just ideas. Do you know of a mythical plant that would be hard to get to but would cure the Hunters? The only one I can think of is moly, from the Odyssey, and that negates the effects of shape-shifting.

Mod
http://www.rareflora.com/
Use this link

Mod
Lover of wine: Diona
Adenium obesum it's a plant

Mod
What about Adenium obesum?
It grows in East Africa

Among these are dictamo (Origanum dictamnus), the herb made famous by Hippocrates for its medicinal properties and is used by the locals today to make Dittany of Crete tea. Native only to the mountains of Crete it is considered a highly therapeutic plant and is reputed to be an aphrodisiac

Mod
Dittany is a good treatment...

You got that from Harry Potter, didn't you...

Mod
Hoyas are becoming more and more popular each and every day. Over the past years we have collected over 100 species of Hoyas and there are probably over 200 species out there. Hoyas are tropical vines that grow better if kept above 50° F, even though some species can tolerate near freezing temperatures for a while. They grow in the shade / filtered light and don't need a lot of water. Keep the soil slightly dry, wet soils can kill a Hoya fast. Hoyas are very good indoors and are very popular for that reason. They don't like big pots and bloom better when root bound. Some people grow them in hanging baskets and let them cascade, others use a small trellis to wrap the vines around. Hoyas are epiphytes, like orchids, therefore the potting soil has to be porous. I suggest that you get a good quality potting soil and mix about 1/3 of an orchid mix (bark, perlite, charcoal.) Fertilization is average. Once Hoyas start to bloom, they do so almost continuously, but more during the warm weather. Some Hoyas are also very fragrant and some species even smell like chocolate or peanut butter! Not only are they fragrant and easy to grow, but most of them have really cool looking flowers! They are nicknamed "Wax Flowers" because the flowers don't even look real. They also have really neat leaves. Some have heart-shaped leaves (The Hoya kerrii's), a lot of them have variegated leaves, twisted leaves, fuzzy leaves, and one even resembles a fishtail (Hoya polyneura 'Fishtail'). This is most definitely a type of plant you should add to your collection!! 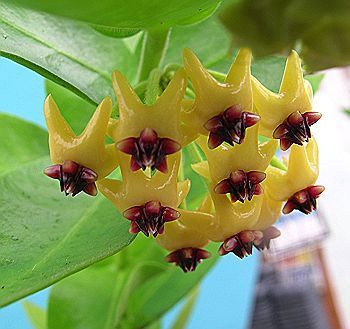 It would be nice to know how rare each of these plants are. 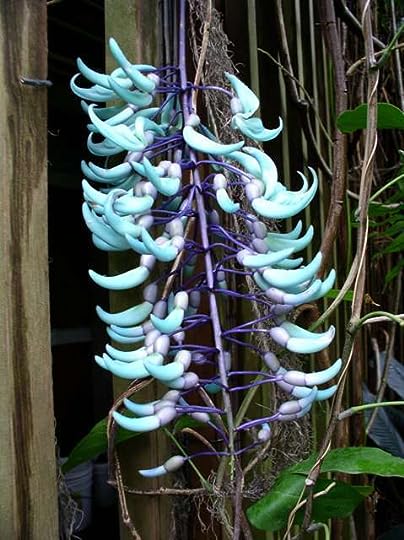 Mod
Not sure, here's where I found it -> http://rareflora.com/strongylodonmac....

message 30: by [deleted user] (new)
Aug 13, 2010 02:42PM
I found rarity of dittany: Today the wild naturally grown Dittany of Crete is classed as "rare" and is protected by European law so that it does not become extinct.

Mod
The jade vine (Strongylodon macrobotrys) is a native of the tropical forests of the Philippines with a local name "tayabak". Its flowers are the color of a jade ranging from blue-green to mint green, depending on the variety of the vine. hybrid jade vines are longer measuring up to .90 meters long - 1.5 meters. The vine blooms in grape like structure amounting to 75 or more. the blooms come out from pruned and mature vines only. Each bloom resembles the form of a stout bodied butterfly with folded wings or the head of an angle with crown if not the head of an Indian chief with a long beard and a longer ornate headdress. In its native Philippines, the jade vine's flowers are pollinated by a somewhat grey fruit bat, a specific wasp and is also a home to a specific butterfly.

S. macrobotrys is prized in tropical and subtropical gardens for its showy flowers which are a highly unusual blue-green. It is usually grown over an 8-foot-tall (2.4 m) pergola so that the flowers may grow longer as they hang down below to be immediately seen. For, once vine maturity is reach after a period of two years or depending on the habitual prunings the vine is generous to produce its blooms. though exquisite, the elusive blooms can camouflage itself in the sunlight and could be undetectable if not for the fallen blooms on the floor from where it hangs. on the floor the blooms still change color as it dried up. mint green to blue-green to purple. In South Africa the jade vine is mainly restricted to the warm humid strip of coastal Natal but grows in a few frost-free spots inland.

The superficially similar red jade vine is in fact a species in a different genus, namely Mucuna bennetti.

It is a "common house plant"

Mod
I just copy random plants and post them *shruggs*

Mod
ʇɐʞ Kat wrote: "The jade vine (Strongylodon macrobotrys) is a native of the tropical forests of the Philippines with a local name "tayabak". Its flowers are the color of a jade ranging from blue-green to mint gree..."

You so copied that from wikipedia, since I just saw that too....

okay, since i'm the one that's got to make the prophecy, anyone want to sum up what should be in it? as much detail as possible, please :D

Mod
HM.
Mkay, so it has to involve the Sickness or the Disease, whichever you want tto use. Then we have to decide the cure, which is in the polls section. It's featured one. The Hunters are the only ones who can get sick

I need to add death to stage 4 of the sickness.... Madeline will get there first since she was the first sick...

Mod
Yeah... Oiiii... Madeline's not going to die, though. I luv her too much.

Mod
I loves Georgi too...

Jw, what happened to the boy pole??

Mod
WHIM! HELLO! And Idk what we calling it O.O

Mod
Whimsicality wrote: "Yurs indeed. And there's like, no Internet. :/ I'll be back on saturday! :) Miss you all bunches and I can't wait to start the quest to cure Niobe's Curse. Is that what we're calling it?"

Sure. It makes sense.

reply | flag
« previous 1 2 next »
back to top
This topic has been frozen by the moderator. No new comments can be posted.
Add a reference: