Waiting for Mockingjay! I turned two ladies onto this series and man oh man were they thanking me!

cant wait for book three this is the best series

Mod
i still haven't read it i am waiting for the third book so that i can read the series at once because i hear that the second book ends with quite a cliff hanger so i think i will wait but i am super excited to read it!

Mod
lol so i have been told lol i am soooooooooooooo looking forward to reading it though!!

yes! You should be lol they are amazing

Mod
XD i cant wait!!! i have heard nothing but amazing things about this book!

So I started Hunger Games two days ago and actually it is really hard to put it down. I am sure, some maybe most of you guys did finish it within some hours but with my limited reading time I am really fast *LOL* The story just got me from the first page... So can't wait to continue with "Catching Fire" and "Mockingjay"

Mod
just finished and i love it!!!!! omg it blew all of my fave books out of the water!!! it is my fave now! team Peeta!

Aiyanna wrote: "just finished and i love it!!!!! omg it blew all of my fave books out of the water!!! it is my fave now! team Peeta!"

hahaha I know it was sooooooooo amazing. If you like Peeta now just wait till you read catching fire!

Glad to hear that you liked it! This is a great series.

Mod
i am reading Catching fire and am Half way through and love it! omg!

I've sucked my husband into this series with me. It's been a lot of fun to listen to it together...we're just under 1/2 way through Catching Fire and are dying to finish it!

Mod
such a great series! I love it! i had a dream i was in a huger game last night it was scary yet thrilling i even had a Peeta! lol

Aiyanna wrote: "such a great series! I love it! i had a dream i was in a huger game last night it was scary yet thrilling i even had a Peeta! lol"

OMG Aiyanna, you're so into it. I'm never have a dream about books I read.

I'm starting the first book and halfway through it. Can't wait to finish it and continue to Catching Fire. But I have to stop for a while because my neck was cramped and my eyes were blurry. LOL

Mod
Sai wrote: "Aiyanna wrote: "such a great series! I love it! i had a dream i was in a huger game last night it was scary yet thrilling i even had a Peeta! lol"

I just finished Hunger Games. I really enjoyed it. I read chapter 1, a day or two ago, and just hadnt had time to pick it back up until yesterday evening around 7. My poor children were so ignored and neglected. I couldn't put the book down, and stayed up way later than I normally do.

I will say this, had she left the last chapter out, it would have probably been a pretty good stand alone book in itself.

I enjoyed the idea of the whole story. I felt it was pretty darn original. I've never read anything with a Mad Max/Running Man theme to it, especially something that involves killing children so openly, although its easy to forget they are children, since they are all self sufficient. I thought Katniss was clueless many times, about interacting with other humans, Peeta especially. But, on the other hand, if Peeta was so brave as to tell her he's always loved her, than he should have made sure it "sunk in" correctly.

I wonder how Cato killed Thresh, and the others who were never talked about.

Yeah, I liked Peeta also, but I feel bad for him about his predicament. My friend is bringing me the next book Monday, so I'm excited to see how things play out.

I was sad about Rue.

Mod
i know i cried when Rue died!! The books just have such a way of picking you up and pulling you into them

Im interested to see how the movie adaptation will play out.

Read and completely fell in love with this book.(specially Peeta!) I havent been able to stop talking to my sisters about it, Im the bookworm in the family so they mostly brush me off. But I already got my younger sister hooked on VA, and got Vampire Academy as a Xmas present for my older sister, so it wont be long for her too.
Ok my point is, Im very stuborn when I believe a book is really really worth reading. So I wont give up until I get them hooked on Hunger Games too! lol
I cant wait to read CATCHINGFIRE but there are about 9 people infront of me =/

If I was you Carina I would just buy it LOL. I had to buy Mockingjay cause the library didn't have it >.<

This series and Mortal Instruments are two that I had to own in print form (not ebook) so I could share them with others.

I'm going to eventually buy the rest of both of those series. I have the last book to each of TMI and THG lol. If I can't get a book when I want it I'll buy it >.<

Yup! this is a series that i want to own in print, not just in ebook for =)

I've been eyeing the 3 book pack... I'll probably end up buying it after Xmas =)

hey look at this guys... there's a rumor that Hailee Steinfeld is in the running for the lead role in the screen adaptation of “The Hunger Games,” as Katniss Everdeen.
image: 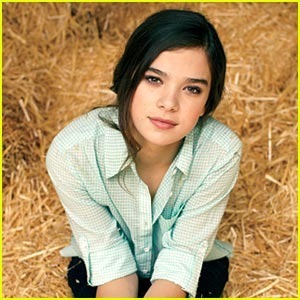 here are the reasons why...
http://thehungergamestrilogy.tumblr.c...

so what do you guys think? i kinda like her, because she's a fresh face in the industry. she might pull it off.

She could pull it off but she is only 14

Ooooo I like her!! And its probably good that she's only 14 because by the time they film it and then the other 2 movies...we dont want her to look too old right ;D

Carina wrote: "Ooooo I like her!! And its probably good that she's only 14 because by the time they film it and then the other 2 movies...we dont want her to look too old right ;D"

I love her! She's the perfect picture i had for Katniss.

She's not bad. Better than 90% of the fancasting looks. At least she's not a palefaced, light haired girl...

you should check out her new movie this christmas. True Grit! :)
i really think she should play Katniss. :) *fingers crossed*

I'll be watching True Grit for sure now, it was filmed here in NM =)

Can't they hurry up and make the movie already, oh and make it GOOD! :p

Are the books good?

This is a must read trilogy. I can't think of many books I'd even count as a must read, even the ones that I really like. This is one of them.

Well, I'll get them as soon as I can make a trip to the library.

Jacquel Chrissy Pattinson wrote: "Well, I'll get them as soon as I can make a trip to the library."

you really should. It's one of the BEST series I've ever read so far. :) really amazing concept and characters. :) the movie will be so awesome! let's just hope they will do justice with it.

Ooooh I got a gift card for christmas and now I know what Im getting!
The 3 book box set of Hunger Games!!!!

Awesome! I have to but them all one day..

Im still like 9 people behind in the library so I better just get them all ;)

YA Paranormal and Fantasy Book lovers