What'd you think of the premiere? Any good husband prospects?

There are a few who are scary.

Yes! There are a few that are scary. And Roberto is to die for! His dimples make me swoony! I'm just afraid he's not gonna make it all the way!

It looks like there is gonna be lots of drama this season.

Yeah, I wonder how much of that is trumped up for ratings, and if they do that, then I really find that disappointing.

I have wondered that too. Last season with Jake had soooooo much drama, it was a little over the top.

Yeah....I loved him at first, but after he picked Vienna I sorta lost interest in him.

I lost interest in him when he wouldn't take Aly back.

Yeah, well I'm really excited she's tne new bachelorette and we get to watch her journey!

It should be fun. I have a girlfriend who watches it too. Every commercial, we call each other and talk about it. Oh, she's a ho and can you believe he did that? LOL

Thats the best! My friends and I have fb discussions on it. We were going crazy over what an idiot "shooter" was for sharing that premature ejaculation story!

Oh, wasn't that the worst? I mean, WHO would tell that to a woman?
I had thought it would be about drinking shots or something. When I heard that, I thought OMG what an idiot. Did he really think that would impress her?

This is one of my guilty pleasures.
I've heard good things about Roberto...

Its my guilty pleasure too! He's really mouth wateringly yummy. My only concern is his age, cuz I think he's in his late 20s, hopefully he's mature enough to handle himself!

There's plenty of spoilers out there about who makes the final two, but I'll keep my mouth shut.:)

I figured there were...I'll probably go in search later. This is one show I don't mind the spoilers.

Where do you find the spoilers?

If you really want to know what happens, go here:

I was so glad to see Craig go home. He was very scary. Ali really handled it well. I hope she finds Mr. Wonderful. Who are your favorites?

That guy was crazy! What a bully! And he had nothing to say when he was alone with Ali. I think he just wanted to come on there (or the producers wanted him) to stir up trouble.

It's hard for me to pick a favorite since I know who the final 2 are ( I went to that website). If it's true I'm not disappointed in her picks--you can see the chemistry already.:)

I love Roberto. Like I said...his dimples are TO DIE FOR!

I like Roberto the best and then the Chris from Cape Cod. Oh goody, only 20 min. to go to watch.

Looks like a real connection with Roberto and with Chris L.

That date with Hunter was painful to watch.

Auntee - it was painful to watch, but i did love his 'darlins' yummy! Reminded me a little of Gage!

I hate when the rejected look so heartbroken...:(

I didn't think Hunter would be a match for her, but I give Ali credit to have the one on one and not give out the rose. That has got to be hard.

I'm sure Hunter is nice but there was no connection.
I thought what Justin did was gutsy. I thought it was great but he had to know the other guys would find out and hate him. I was surprised he cried.
Speaking of crying, Jonathan crying and being so nervous was weird. I think he is a big baby and I can't stand him.

Yes, enough of Jonathan already. You can see there's no connection there other than friendship.

I agree Jonathan needs to go.

omg my bf and I laugh at Jonothan... he's so lame!

I still can't believe that he cried about kissing Ali. Christ, is he gay?
Now that would be a funny twist on this show.

he cried??? I missed that! I missed the first hour of Monday's show. His tv stations is going to lose viewership after this. Although, there is just something about weathermen. My local guy is a supremo dork too.

He was so nervous about kissing Ali for this music video that a bunch of the guys were tapping with Ali that he cried. The big wuss. He is WEIRD about everything not just that and oh, he is a big tattle tale too.

Wasnt it Craig who kept giving him a hard time? I loved it! I kept laughing and cheering him on to keep pushing, keep pushing! He seems to always be 'on'. I don't know...he's highly annoying and highly amusing to laugh *at*

Yes it was Craig. I couldn't stand him either cause he was a bully and I could see him as a stalker. He was scary and I bet he made weather boy poop his pants. hehe

I couldn't believe when he started crying because he had to kiss Ali, he got so nervous. The other guys would have killed for the chance.

i'm going to have to go and look for that clip....cried over kissing her??? KISSING? How in the hell was he ever going to go to bed with her???

I can't believe crazy Kasey is still in the running...

I can't believe tattoo boy is still around either. I just howled laughing with all his singing. And then weather boy starts singing too but thank God he's finally gone. I really liked Jesse. I wish she hadn't gotten rid of him. My two fav's are still Roberto and Chris L.

I wanted to poke my eye out every time he said "guard and protect your heart" It was horrible! Creepy...gave me the shudders.

Other than rolling on the floor laughing at his singing, I wished I was playing a drinking game for how many times he said that. And then he didn't EVEN get a chance to show her Bahhhhhhhhhhhhhhh.
I swear, if she ends up picking him, I'm NEVER watching this show again. LOL He is sooooooooo desperate it's scary. He is very immature too the way he was acting at the museum.
That Roberto though, I just want to pinch those cheeks. The ones on his face too. hehe

There is no way she is picking him. I mean look at him and then look at Roberto. They are in two different leagues, and she's just not that stupid. I was telling my friend the same thing about the drinking game!!! Moron!!!

Just watched the show this afternoon. I was so surprised to see Jesse go home and Kasey staying. :( But she didn't think they matched so it is better for him that he knows. What a cutie though. Roberto looked very good in his Lion King costume. Kasey has got to go next week along with Justin. That guy is just not nice. Chris L. seems really nice and caring. What about Chris N? He never says anything.

Do you guys ever read the Entertainment Weekly Bachelorette recap? Funny stuff here:

That was funny to read.

Going slightly off-topic here (or better yet staying on topic but going off-season)...

My Bachelorette obsession ended 2 years ago when Deanna sent Graham home in the final four. They were perfect together but he wouldn't commit to a marriage proposal if she picked him. He said he just wanted to continue developing their relationship. (Perfect for real life but not for a tv show that is hell-bent on cloning the Trista/Ryan love match every season.) Damn ABC for pressuring her to get engaged since she had been dumped by Brad the season before (he didn't pick either girl) and therefore it was up to her to salvage the show's reputation. How sad she had to let go of the one guy that might have been the true love of her life, only to end up getting engaged to Jesse (which alienated most of the viewers anyway) and breaking up a month later.
*sigh* thanks for letting me knock a piece of that tired, aging chip off.. 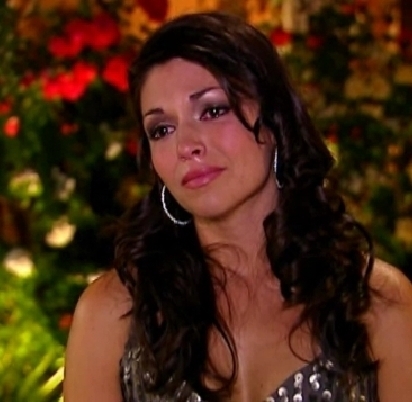 Not the usual look for a bachelorette watching #4 walk away!

Deanna had a ruff go of it. Ali seems pretty smart. I have been very pleased with her process and the questions she asks.

I know what you mean. She chose Jesse who had no regular job and lived in his parents basement. Now there's someone you want.
Then last season, Jake chose Veninna who everyone hated. That almost broke me from watching the show.

I wouldn't have watched the show again if they hadn't made Ali the bachelorette. Jake picking Vienna was horrible. That girl has serious issues. And I thought that i Loved Jake, but as I watched the show, listened to his words, and saw his decision making process, it became clear to me that he was more than likely a control freak and the young age and immaturity of Vienna spoke to that control freak inside him. I mean how the hell do you pick Vienna over Ali?? There was nothing redeeming about her at all, except she worshipped him. Ali was smarter, more mature, and way way better looking!

That being said, if Roberto doesnt make it all the way to the end, and they make him the next bachelor, I'm stuck watching another season again! UGH