note: This topic has been closed to new comments.
26 views
Feeling Nostalgic? The archives > Were you in band?

Ok, last night I attended my fifth grader's band concert, and holy hell, that sucked. He plays percussion. My first grader and I stood in the doorway, watched, and bolted as soon as we could. And the band director seemed to think the concert was more about him and talked for about ten goddamn years before letting the band play. And I had to go to my other son's piano recital a couple weeks back. That wasn't as bad, though. The venue was smaller and not jam-packed with parents looking at their watches.

i was not in band. sadly i helped fuel the fire of the negative image of band people being nerds and geeks by thinking and saying they were. that was wrong and i would have done things differently now as i know how hard they work and what great people most of them are/were. later in life you find out two things about band people: one is that they were about the only ones getting laid on a regular basis in high school and B) many of them end up being professionally successful in life and are the bosses of we former jocks.

My first HS was in southern CA, so marching band was the big thing. We were actually pretty good and won a lot of competitions in my two years there. It went quickly downhill after I left, not because of me but because the band director left his wife, married a girl who was a senior in my last year, and quit his job to become a nurse. Bummer -- he truly excelled as a band director.

The other HS I went to wasn't as good, but had some outstanding performers. One of my friends is a conductor now, Jung-Ho Pack (we called him "Don"). Playing with this group is where I discovered people would PAY for performances, so I got together with a few friends and played at churches, conferences, etc. No weddings; too much schmaltz.

Yep, garage band in high school. I played drums. How I got in the band is a funny story; my friend Ritchie (we're still friends) started up a band for a Battle of the Bands shindig, and all he could recruit at the time was one girl who was decent at bass and one girl who looked as if she's never seen a drum kit before. I told Ritchie I'd teach the girl to play drums, but, really, I was plotting her exit from the band. Took me all of one afternoon to convince her to step away from the drum stool.

Long story short, the band we formed for the BOTB was a shambles. All Ritchie wanted to perform were Springsteen songs - we settled on "Born in the USA" - and I realized this band was shit when I suggested we write an original; when I explained to the (new) bass player - the girl who played bass split because of "creative differences"; can you believe that shit? - that he should "come in on four," he looked at me like I told him to split an atom with a toothpick.

Best moment of the BOTB: we came to the part in "Born in the USA" when I could do a quick drum solo. I killed that solo...but only because I lost a stick in the process, and didn't have any spares. So I did my best John Bonham impression and started bashing the drums with my hands. The guy whose drum kit this belonged to had this look of horror, like he just watched his mom give his dad a blow job. And I got a standing ovation for it. Ah...glory days indeed.

Allegedly, there's a video of that gig floating around somewhere. A friend of ours swears he has it, but I have yet to see it come to light.

I WAS in choir and concert band through ninth grade, both of which we will dismiss.

I WAS in a band called Hellbound Train in seventh grade, with a couple of guitars, several keyboards, and a girl playing drumpads since we lived in NYC. I had just convinced another girl to buy a bass when we had to move. The drummer's father did A & R for Atco so it's too bad we didn't make it farther than our signature song, "Hellbound Train."

Why does this have to be "was" anyway? KD & I both make music (on opposite coasts).

This is my fault...I was conceptualizing band as, you know, wearing funny hats and playing the tuba or whatever as part of the K-12 school experience....

In order words, you're asking if any of us were "band geeks."

Oh. OK. I played flute for one terrible year, but I wasn't cut out to be a band geek.

Mod
I was in band! I played clarinet!

i played recorder until i was ten. i really wanted to play flute, but my fingers were too short when i started with music and when they were long enough i wasn't interested anymore.

Sally! I played clarinet too! I started when I was in 4th grade, but I really was never all that great. I still have my clarinet, in a closet. I wonder what awful sounds I could get out of it now?

And had to wear awful uniforms, and yes a bowtie. And a dickie.

And yes, my best friend from junior high thinks it's just great to post photos of us in band on FB, and tag them.
:::sigh:::

This is what my old high school has for band uniforms now. The old ones were similar, but didn't have the rose.

The other HS I went to is currently wearing these: 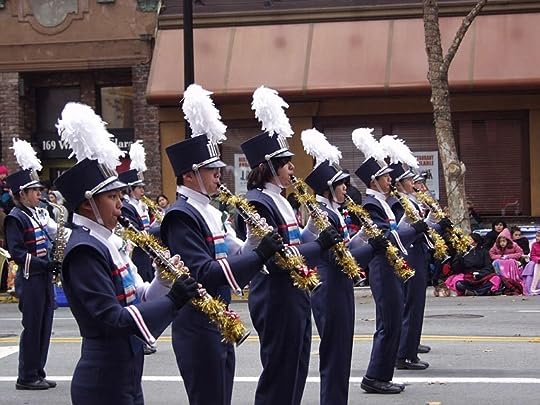 Did they have adjustable pants, Phil? With velcro tabs on the sides?

Yes, I believe they did. Sort of like a rental tux. :)

I was in band for 1 yr. in 6th grade, I played clarinet. I HATED IT! I went back to choir where I belonged.

No, but I once drunkenly climbed up on stage during a Nick Lowe gig at St. Andrew's Hall. Does that count?

at a big club one time there was a sucky band onstage playing badly and loudly while my buddies and i got drunk. we got separated somehow and it was all crowded and hoppin' and then i heard the band stop for a minute and the lead singer say over the microphone to someone on stage: "who the hell are you?" to which my buddy replied "i'm scott hancock, who the hell are you?" the singer said "i'm jimmy steve and this is the rawhide band. what are you doing?" my buddy says "looking for kevin... (scanning crowd) oh there he is. later"

That was quite a courteous onstage interaction!

I may have said this before, but I leaped off the stage at Caberet Metro in Chicago in October of 1984 at an Out of Order concert. Sadly, the crowd was sparse that day, easily parted, and I hit the floor full-on. I still have a bump on my head.

That was back in the days when we were encouraged to stage dive.

Clarinet, fifth grade through 10th grade. I loved band, but then I fell in with a bunch of writers--yearbook and the high school newspaper. We were all about freedom and loved quoting Tinker vs. Des Moines. I did not attend band camp, just summer band workshops. But I did attend Yearbook Camp--I think it was in Milwaukee, RA!! First time I ever purchased wine from a liquor store. I was tall, and wore a trench coat and a lot of lipstick, so I got voted wine buyer.

Mod
My first boyfriend was in band too. he was first chair trumpet. My good god that man could kiss. Strong lips. Oh, mmm, wow.

Can lips get stronger? I mean, can you work them out? Are there muscles in there? There must be, right?