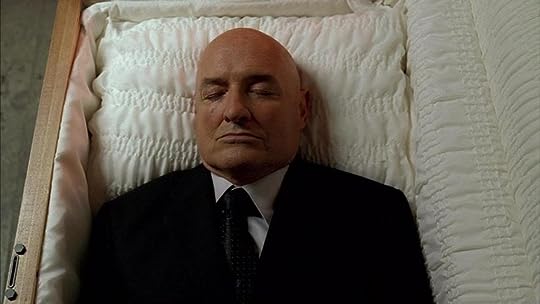 Why oh why did they have to put Locke in that coffin. My poor heart is crushed to bits. I know, I know, its 3 years in the future, we still have 2 more seasons with him, but ... it just wont be the same for me anymore. Why couldnt it have been SAWYER!!

WHAT?!?! You would have preferred a dead Sawyer to a dead Locke??? Locke always had to die, he was the messiah of the island and everyone has to kill their messiahs. He's not dead dead, he's only mostly dead. I predict he'll be alive and well in the series finale.

Still, rather disconcerting to see Locke in a coffin. Who do you think killed him? Richard? The ghost of Keamy? Jacob? Christian? Widmore himself?

It seems to me that Locke has just entered a new level of play when he supplanted Ben as the island's chosen one. Maybe he just wasn't cunning enough to play.

rofl! Logan - you took my favorite line! Why don't you give me a paper cut and squeeze some lemon in it?

Locke will be back.

You would like Saywer to be evil instead? I was heartbroken as well, poor Locke! I think knowing that he is Jeremy will add a new side to Locke. I think maybe the island killed him. Or Widmore, or Ben. But why would he be off the island in the first place? I just think no one can top Ben's evilness, so there should've been no wonder that he died. Why did no one go to his funeral? What made him such an evil man?

Mod
Logan, I loved Lockes character. I am not thrilled with the whole dead locke going back to the island to become undead like christian... its rather upsetting. I know he will be in the show still (this did happen three years in the future and we really arent that far ahead yet...) but still...

Yeah i would rather have seen sawyer in there.

But if Locke has to return to the island (even as a corpse)he will undoubtedly rise again just as Christian and Claire did.Just as Logan so aptly put it,he's not dead,he's only mostly dead.
(one of my all time favorite lines as well)

So I've missed a few episodes along the way and I'm just wondering, has Jeremy's name been mentioned in the earlier eps? Like do the others know this name, even though they didn't know it was Locke?

I've never heard his name before the finale.

Mod
back at the end of season 3... when we first saw the flashfoward and jack going to coffin... he had an obituary in his hand.

Some lost freaks took that snapshot and blew up it up (magnified it) and we saw the name j....Bantham commited suicide...survived by a teenage son...

it was a huge topic of debate on other sites as to who this Bantham person was... but as for the show, no.. it was never really put out there or mentioned before. 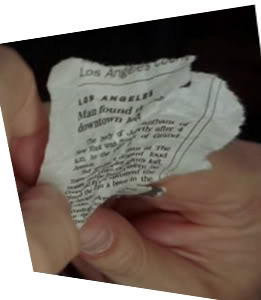 Hm, food for thought. So do we know he has a son? Sorry, am completely forgetful but once Lost is all over and done with I will be buying it on DVD and watching all the way through again.

Mod
no, far as we know he has no one... but the obit, as we know, contains false information. Its a fake identity for starters, so why not create a fake family, right? but really, we dont know.

Just thought I'd chime in that it's "Bentham", not "Bantham". Normally I'm not a stickler for the spelling of names (I've been known to misspell Widmore a time or two myself), but since Bentham is a real life philosopher which seems to have a tie-in with the show, I thought that may be important to note the distinction for some who may not have read some of the other threads here on Bentham.

Mod
ooppss.. thanks for correcting me. I didnt even notice i had it wrong. My spelling at best is atrocious!

Seriously, I've seen worse. Much of it coming from me with my "Whidmore". Just thought it would be good to fix in case people wanted to Google it. Crazy stuff I tell ya. Don't know where the writers come up with it.

reply | flag
message 16: by [deleted user] (new)
Jun 18, 2008 10:17AM
By the way that pic scared me i was not prepared to see that. Yeah i know what you must thinking, that i am gonna be a cop and i should be prepared or something like that. well anyway i like sawyer, if anyone should be in that coffin its well, um Locke, i mean he went from being a good guy to a control freak, always telling ppl what to do. This is just my opinion. i think he got killed when he stepped off the island maybe, when ben shot him, somehow he was still alive but maybe he got off the island and died. my point is he got shot and was supposed to be dead, but the island had keep him alive, and maybe later he got off and died

Hah! Do you honestly think so? It has to be elaborate, HUGE.

It's so freaky seeing Locke in the coffin like that.Startles me every time!

It is, I want to know what changed him! And how did he die.