Mod
This is the thread dedicated to the discussion of both Battles of Cambrai (1917 and the one which occurred in 1918) (people, locations, events, books and other publications, battles, historic sites, maps, research information, urls, etc.)

Just as an FYI - John Keegan in his book The First World War dedicated pages 369 to 371 to a discussion of this area.

Mod
"The Battle of Cambrai (20 November - 3 December 1917) was a British campaign of the First World War.

Cambrai, in the Nord département (Nord-Pas-de-Calais), was a key supply point for the German Siegfried Stellung (part of the Hindenburg Line), and the nearby Bourlon Ridge would be an excellent gain from which to threaten the rear of the German line to the north. The operation was to include an experimental artillery action. Major General Henry Hugh Tudor, commander of the 9th Infantry Division, suggested trying out new artillery-infantry techniques on his sector of the front. During preparations, J.F.C Fuller, a staff officer with the Royal Tank Corps (RTC), was in the process of looking for a place to use tanks as raiding parties. Field Marshal Julian Byng, commander of the British Third Army, decided to incorporate them into the attack.

It is erroneously noted for being the first use of tanks in a combined arms operation. However, small scale combined arms attacks had been used at the Battle of the Somme, with mixed results.

Despite the initial success of the Mark IV tanks at Cambrai, German artillery and infantry defences exposed the frailties of their armour and the tanks became mostly ineffective after the first day. The battle was largely an artillery-infantry battle that achieved surprise and technical superiority against strong fortifications, but weak German infantry and artillery defences, which then recovered.

The British attack demonstrated that the Hindenburg Line could be penetrated, and showed the value of new artillery and infantry doctrines, such as Sound ranging and infiltration tactics, that would later play a vital part during the Hundred Days Offensive.
The popular perception of the battle as a tank battle was largely the result of extensive writings of biased historians Basil Liddell Hart and J. F. C. Fuller, of whom the later falsely claimed credit for the operational plan. Liddell Hart, a critic of Douglas Haig, attempted to use the battle to indicate a "new" form of doctrine. Liddell Hart's position as Military Correspondent of the Daily Telegraph and the The Times newspapers in 1925 to 1939, allowed him enormous access to the greater public and therefore great influence. Several modern studies, and the The British Official History, rejected the position of Liddell-Hart and Fuller."

Mod
The Battle of Cambrai was a battle between troops of the British First, Third and Fourth Armies and German Empire forces during the Hundred Days Offensive of World War I.

The battle took place in and around the French city of Cambrai, between 8 October and 10 October 1918.

The battle incorporated many of the newer tactics of 1918, in particular tanks, meaning that the attack was an overwhelming success with light casualties in an extremely short amount of time.

Mod
These are some great photos from the Battle of Cambrai:

Some then and now photos: 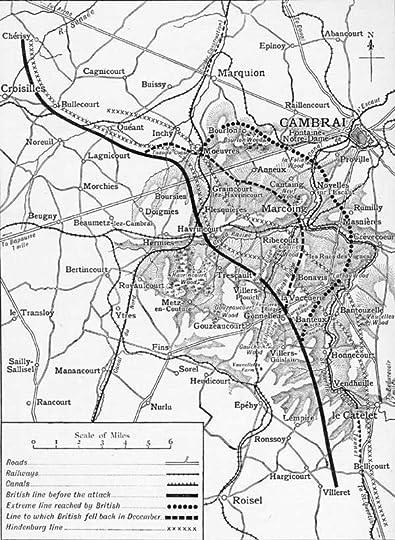 All of the above were from a site by Ian Saunders who visited the Cambrai because of a family member - a Great Uncle had been killed there. He thinks it is a forgotten site.

Mod
The German Army at Cambrai

by Jack Sheldon (no photo)

This latest 'German Army' book by Jack Sheldon covers a shorter (three week) timeframe than his earlier works. After an introductory chapter tracing the development of the Hindenburg Line, the author concentrates on German aspects of the bitterly fought battle of Cambrai from 20 November to 6 December 1917.

The narrative splits easily into two parts. First the defensive battle 20 - 29 November followed by the counter-attack which saw the German Army regain not only most of the ground lost in the opening phase but more besides. Detailed descriptions are given of the struggle for Flesquie'res Ridge and the see-saw battles for key terrain, including Bourlon Wood, as the German Army rushed reinforcements to the sectors under attack before we witness the German offensive.

As with his other books full use is made of primary source material from the Munich Kriegsarchiv, the Hauptstaatsarchiv in Stuttgart, regimental histories and personal accounts. Of particular interest are the controversial interventions in operational matters of Ludendorf which were sharply criticized by Crown Prince Rupprecht. But for many the most fascinating aspect will be the experiences of the front line soldiers.

by A.J. Smithers (no photo)

It is probably true to say that no land battle of this century passes Cambrai in importance. Up to the winter of 1917 warfare had changed only in degree since the coming of gunpowder. The scenario, with parts for horse, foot and guns, remained essentially the same. All this was part of a world about to disappear for good with the introduction of the tank. The British Army, hammered by years of war and facing almost alone the vastly increasing strength of its enemy, was expected by most observers to be near to going down in defeat. Instead of that, using British designed and built fighting machines of a novel kind, it attacked and drove the Germans from the strongest fortifications ever built. Nobody, save for a dedicated few, had believed such a feat possible. After profiting from its lessons the same Army, 12 months later, achieved its greatest victories of all time and saved Europe, for a time, from German dictatorship. The methods used made obsolete everything that had gone before and laid out the ground for each serious operation of war from Amiens to the Gulf.

Cambrai 1917: The Birth of Armoured Warfare

by Alexander Turner (no photo)

This crucial new study of one of the seminal events in military history dispells many of the myths surrounding Cambrai 1917 of World War I (1914-1918). Common perception classifies it as the "world's first tank battle" but Alexander Turner shows us that the real importance of Cambrai was that it saw the first use of armor as an operational shock tactic. With the pre-eminence of armor, the conduct of war was irrevocably changed. The battle also heralded the combined use of aircraft, armor, and artillery, marking the birth of modern combined-arms techniques. Written by a military historian and serving soldier, this is a fascinating analysis of a battle which was a stalemate, yet spawned a host of war-winning tactics

Have read this book. It's a good intro to the subject and has fine maps.

There is nothing that irks me more than to pick up a book on battles and find that the author did not include maps. I like to be able to see the lay of the land and the troop movements and mere text does not give the reader (at least this reader) a fair picture of the battle(s) and tactics involved. It is a pet peeve of mine.

Mine too. That's one of the major problems with a tablet, the maps can be non-existent.

by Andrew Rawson (no photo)

Cambrai Campaign 1917 is an account of the British Expeditionary Force s battles in November and December of 1917\. It starts with the plan to carry out a tank raid on the Hindenburg Line at Cambrai. The raid grew into a full scale attack and Third Army would rely on a different style of attack. The preliminary bombardment would be done away with and the troops would assemble in secret. Predicted fire had reached such a level of accuracy that 1,000 guns could hit targets without registration. Meanwhile, over 375 tanks would lead the infantry through the Hindenburg Line, ripping holes in the wire and suppressing the enemy. The study of the German counter-attack ten days later, illustrates the different tactics they used and the British experience on the defensive. Each stage of the battle is given equal treatment, with detailed insights into the most talked about side of the campaign, the British side. It explains how far the Tank Corps had come in changing the face of trench warfare.

Over forty new maps chart the day by day progress of each corps on each day. Together the narrative and the maps provide an insight into the British Army s experience during this important campaign. The men who made a difference are mentioned; those who led the advances, those who stopped the counter-attacks and those who were awarded the Victoria Cross. Discover the Cambrai campaign and learn how the British Army s brave soldiers fought and died fighting to achieve their objectives.

I second that. Cambrai has been poorly served and the amount of maps seems copious.

by Chris McNab (no photo)

Everything there is to know about this battle, legendary for its experimental use of artillery, infantry, and tanks

The Battle of Cambrai has become synonymous with one of the Allies' first large-scale use of tanks on the Western Front.

Cambrai certainly saw over 450 Mark IV tanks lumber across No Man's Land and penetrate the Hindenburg Line. For the Germans on the one side of these defences the sheer scale of these 'iron monsters' was terrifying, however they quickly rallied and the battle was about much more than the tanks deployed.

Chris McNab explores how new techniques of sound-ranging and artillery strategy played a greater part on the battlefield than the tanks which have dominated the history of the battle. At dawn on 20 November 1917 over 1,000 guns fired on German positions and 400 tanks and thousands of men stepped out into the barren land between the trenches.

At first, it seemed that success was inevitable, with over 5 miles of ground gained - a significant amount for such an operation, however on the first day of battle 180 tanks were out of action and the attack began to flounder.

After days of attack and counterattack, both sides had gained ground, but no definitive success and with over 70,000 casualties.

Yet, Cambrai was an important training ground for both sides, proving the effectiveness of new tactics that would lead to greater victories later in the war.

Chris McNab is a writer and editor who specializes in military history and technology. He has published more than 30 books, including The Great Book of Guns, The Illustrated History of the Vietnam War, Modern Military Uniforms, and The SAS Mental Endurance Handbook.