I have noted that several people have chosen books about the romances and relationships among artists. This would be a great and fascinating topic to read about and discuss! Feel free to add your comments here regarding the book you have chosen relative to this topic.

If someone is interested in the relationship between Calder and Miro, this is a great book--


The sculptor Alexander Calder (1898-1976) and the painter Joan Miró (1893-1983) first met in Paris in 1928 and became life-long friends. This original and visually stunning book places the mobile sculptures of Calder alongside the poetical paintings of Miró and provides fresh insights into the visual dialogue between these two artists. What did the painter see in the sculptor? What did the sculptor see in the painter? These questions are answered through an extensive examination of the exchange of artwork and correspondence between the two artists, maintained across two continents and through the turmoil of war. (Review.)

This was an exhibit at the Detroit Institute of Arts in 2006. It would have been great to see! But I copied the synopsis of the content of the exhibit which I found interesting. I would like to also suggest a book regarding their love, turmoil, and ultimately Camille's mental decline. 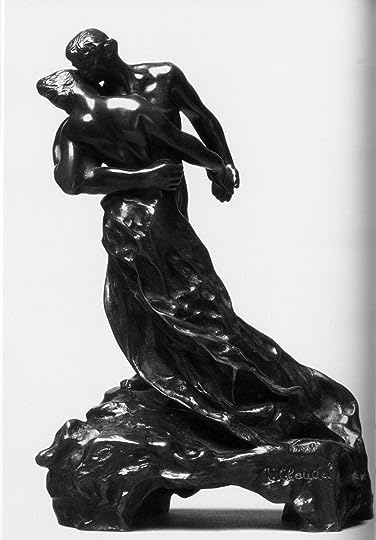 Romeo and Juliet, Antony and Cleopatra, Rodin and Claudel
Among the worlds greatest love affairs, theirs is the only one carved in stone

For a brief, happy period, the two artists had an intense love affair fired by a common passion for sculpture. Claudel was present and involved during the creation of Rodin’s masterpieces in the 1880s and early 1890s. In the progression of her training in Rodin’s studio, she soon sculpted works of remarkable character and expressive power."

Then came the storm. While Rodin’s new vision of sculpture spread over France and the world, Claudel struggled to have her work recognized in its own right. Irreconcilable artistic and personal differences developed. Their love dwindled. As Rodin’s skill and reputation grew, he was recognized as an artistic genius. He was often compared with the Italian master Michelangelo, as each was the most famous artist of his time. Meanwhile, Claudel withdrew and struggled with psychological problems, which caused her to be institutionalized for the last three decades of her life.

I doubt there is any art lover who have not read this book yet, but I posted it here because for me it is the one of strongest books about this topi.
Even if it is not most detailed book about this subject, it is definitely most comprehensive book about artists and their relationships because it includes stories about lifes and loves of Manet, Monet, Van Gogh, Modigliani - introducing to the reader many famous and brilliant painters in an interesting way.

Thanks Jovana, I really like the writing of Susan Vreeland. This looks good, I added it to my list.

Me too.
I'm going to the library today to pick up The Passion of Artemesia by Vreeland (interlibrary loan).

Carol wrote: "Me too.
I'm going to the library today to pick up The Passion of Artemesia by Vreeland (interlibrary loan)."


Carol,
Did you get Vreeland's book? I read this book a few years ago, and really enjoyed it. Are you enjoying it too?

I haven't started it yet. I'm reading a biography on Benjamin West and I've got 40 pages to go . . .

Carol, are you enjoying the book, who is the author?

Thanks for asking -- Yes, I am enjoying it.
It was amazing what they went through during those days (going on boats for months to other countries (meeting Napoleon Bonaparte and Jacques Louis David) or shipping paintings on boats, discovering months later that they were damaged by water and in some cases ruined.) Controversy between West & Copley, strong disagreements within the Royal Academy, his relationship with George III (& the king's health) and all the students he instructed. Plus his childhood story of learning from the Native Americans how to make red and yellow paint colors, and how he cut fur off his cat to make a paint brush. It's an easy read with a lot of information. I am surprised that the book was never reprinted. I got it at the library. It's written by Robert C. Alberts, Houghton Mifflin, 1978, 525 pp. I could not find it in the goodreads database --

I'm not normally into "Colonial" American artists but the museum is renovating and has closed the gallery of American history paintings. And now just a small sampling of paintings have been placed into a smaller gallery which makes me see them in a new way.

[image error]
I also found a children's book about him that is true to his life which I could use as part of our "Last Saturdays" (free admission betwn 10-1 & offering programs for children/families).

What you reading now "createjoy"?

The West information is fascinating. I can add the book to the database if you'd like, send the details.