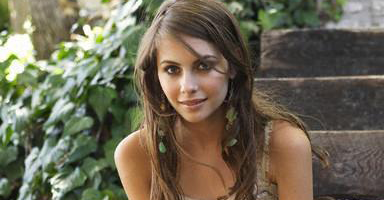 She's very pretty, has a red streak on her side bangs, and black wings streaked with some white. She has a hideous scar that wraps from the top of her collar bone, around her neck, and in a curvy line to her waist--she was tested on as an experiment and that's how she got it.
Personality: Argumentative, Stubborn, Fierce, and has a bit of a temper. Once you get to know her, she's very loving and sweet, and protective of her 'family'. Sarcastic at times
Flock: Not part of one yet--has been living on her own for some time
Species: Avian American
Other/Background: Escaped the School out of fierce rage when she was 13 after she watched her younger sister being experimented on and murdered.
skills: Great with a dagger she has, and good hand to hand combat skills.
Crush: Open

Maximum Ride is an awesome book series that follows six kids...Max, the leader. Fang, Iggy, Nudge, Gazzy, and Angel, including a talking dog named Total. They were all either kidnapped or sold to at birth by evil people called White Coats, who took them to a place called the School. It was there they were all experimented on, and they all ended up with wings--making them able to fly. They escaped the School, and basically the series follows the kids as they re on the run, saving the world, and battling Erasers. Evil, monster things the White Coats created. Half human, and half wolf. When they're human, they could be mistaken for man models. When they aren't....they're just ugly and gross, and sometimes can fly.

Name:Raven Dareth
Age:13
Gender:F
Looks:Short Black hair, red eyes, and pale skin. Although her eyes tend to change color at times. Rosy red lips.
Personality:Very dark and quiet. Never really speaks. Very clever and dark though. And gothic.
Flock: (the name of your group. ^^ You can make your own, but guys please try not to make like 30 leaders for each flock, lol.)Um....the hybrids?
Species: (I.E, Avian American, White Coat, Human, Eraser, Flybot)Avian American?
Other/Background:Her twin was killed at the school from an experiment gone wrong.
skills:Close combat and weaponry. She is also good with telepathy and can have a freeze stare if she tries hard enough.
Crush:Pending...
Other:She is a Raven hybrid, with shadow and light powers. She can create and hide in them, and can also use them as a weapon... Not very powerful with that side of her, whilest she hasn't noticed her power. She only knows about her dark power, not her light....

Cool. We could just sorta end up like that in the end though.

and all together, Marga:)

Name:Brianna
Age:15
Gender:Female
Looks: long black hair that she keeps even if it gets annyoing when she flies, black and red wings like her hair, tall (duh), she has red eyes
Personality: You can decide
Flock: Her and her twin brother Rayn
Speaices:Avian American
other/background: When they experimented with her and her brother they had shot some kind of liquade fire in her, it caused her eyes to change from their gray to red, and her black hair and wings to have red streaks. her and her brother got out because of the experiments they did on them because of they put the liquade fire in her she could control, make it appaer at will. she can not be burned ever but put her in an extremly cold place and she'll die
skills: can control fire
crush: open


Name: Ryan
Age: 15
Gender: male
looks: black hair and wings with silver streaks, his eyes are silver, tall
personality: you can decide
flock: only him and his sister
speacies: avian american
other/background: they injected liquade ice in him so he can control ice, his and briannas powers allowed thwm to escape. he will never freeze to death put him in ahot place and he will die. just to get this out there it hurts to have that stuff put in you and to have the slow processes while your body changes. his sister and him were the first to live after that happeing
skills: can control ice
crush: Ginny

ill probly go then cause im like 100 pgs b4 i finish MAax, and im gettin Fang soon

I have the manga of the first two books, so HA!

i want them too! any one read Fang yet? i know it just came out today but some peopel (lik me XD) lik to get the bok as son as they can..

lok at this its funny

whatcha doin'?
eatin' chocolate
where'd you get it?
doggie dropped it
where's the doggie?
outside the door
what's he doin'?
makin' more!

laughing my fucking ass off while rolling on the floor.


IF YOU ARE READIN THS AND HAVE MY CELL PHONE # LISTEN! STOP TEXING ME IN THE MIDDLE OF THE NIGHT!!!1

Personality: fun,light hearted , a big teddy bear but extremely protective of his friend risking his own life if need, some what layed back, music changes his mood and its deeply important in him

Background: his father died but he has found out manly secrets about his family

Power/Skill control of fire ( his father ) and ice ( his mother ) and the world's greatest archer , The strongest in the flock tied only with Raven and somewhat the flock leader

Name: Dorchet
Age: 21
Gender: F
Looks: http://nd01.blog.cz/252/209/0b77341fe...
Personality: Not very talkative, ignores most people, hates water
Crush: None
Background: Grew up in the School, broke out when Max and the flock broke out several experiments. she lives on her own
Power/Skill: She was mutated with a dog, so she has the senses of one, and the tail of a dog, but it doesn't really do anything
Other: Can't swim

can he be katies crush

What's a Sheep? I don't think thats in the bokos...haha

And a sheep is a farm animal. He is a sheep/human hybrid.

Lols well they do mix them with different animals. Erasers are part dog and stuff, and in one I think there is a cat/human, but sure.