Mod
I can't believe my eyeballs over in the Jon Gosselin/I never thought I'd say this thread, the Librarian et al are spouting off some nonsense about how much they like Bullcok, yadda yadda, so much more than Meg Ryan! ! ! ! ! ! Whaat? I say? Travesty!

Bullock might be semi cute, and somewhat talented (ahem, Academy) but she is no Meg Ryan, not by far! Meg Ryan is WAY cuter and MUCH more fun to watch. I'm appalled!

C'mon someone else needs to join me here in team Meg.

I totally drooled over Meg Ryan. I willingly watched her films just to get my Meg fix.

Too bad she went the Collagen way...ooof!!!

Mod
Is she all collagen puffed now? Bummer.

i know that was when she was hotter than a $2 pistol and my vote totally woulda went her way. she coulda clubbed baby seals dressed like that and i would not have minded

Plus she married Jesse James. She scores points for that in my book.

I'm not in a hurry to see movies from either of them but, of the two, I'd rather spend a hot, steamy night with Meg.

Now I've got to try to stop cracking up from Sally writing "Bullcok" at the start of this thread.

I don't like either. What are the other options? Who else was cute back then?

RandomAnthony wrote: "I don't like either. What are the other options? Who else was cute back then?"

You talkin' 1980s? I liked Ally Sheedy in "War Games" and "The Breakfast Club," but her cuteness faded after that. Phoebe Cates was smokin' in "Fast Times" but not as cute in "Gremlins" (or anything else). My friends liked Daryl Hannah, but she didn't do it for me.

The one to watch, though, was truly an Angel (of the Charlie variety).

Clark Phil drifted back a bit. I do that sometimes, too.

Meg Ryan was WAY hotter with straight hair than curly hair. And she was annoying as hell. I just didn't like her, I guess. So I'm definitely a "neither" on this one.

I did a search for "hot actresses of the 90s" (for research purposes only, of course) and didn't come up with much. Winona Ryder? Gillian Anderson? Alicia Silverstone? None jump out. And then I ran a search for "Romantic Comedies of the 90s" and Julia Roberts is in way, way too many. So I don't know who I was lusting over in the 90s, but it wasn't too many women in romantic comedies.

You don't have to.

Okay, I'll put in a vote for Kathy Ireland and one for Jennifer Aniston.

Mod
This topic is sad and gross.

Mod
I don't think any of these people are attractive! I didn't then, and now even less. That's it? That's all the 90s had to offer?

I really feel like Meg Ryan was as cute as cute got in the 90s.

You know who's crazy cute? Alison Brie, the actress who plays Annie on Community.

and the one on the left:

By the way, Community is quickly becoming a favorite television show. Sharp writing, I find myself laughing out loud at least once an episode...this week the pictionary scene did it.

Wo yeah I agree with statement #1.

what about jessica from roger rabbit. va-va-voom

(I was always partial to Daphne, by the way, and when Sarah Michelle Gellar agreed to play her, I thought it was a perfect fit.)

betty rubble or wilma flintstone (betty was prob a phreek)

Ummm, okay, it all started with that goofy movie Addicted to Love which was just flat out creepy. And THIS is what sealed the end of Meg Ryan girl-next-door appeal: 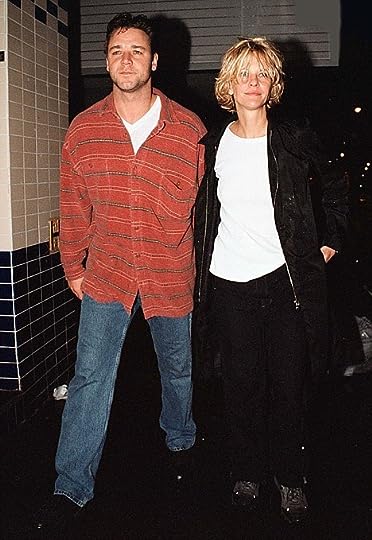 And for those of you who need me to spell it out... she had an affair with Russell Crowe while they were working on Proof of Life together. Don't get me wrong - I was totally jealous of her at that time! I had THE biggest celebrity crush on Russell Crowe. But the affair totally tarnished that girl-next-door image that she was able to capitalize on. She lost her public innocence and sweetness... and after that, no more really cutesy roles were coming her way. And when she started going collagen crazy, that really turned me off to her stuff. Whereas, I USED to go to a movie because it was a Meg Ryan film, she's no longer a draw for me.

Sandra Bullock. She makes smart movie choices. Plus, she totally won major brownie points with me when she dated Bob Schneider (at the time, a lead singer in an Austin band), whose music I adore.


As for more 90s leading ladies with girl-next-door appeal-


Gimme a bit and I'll come up with some more. Sorry for the delay in responding to this discussion, but now you have my two cents.

Mod
No ! In a good way! Not only did you list some actual hotties of the 90s, but I now see the glory of Ms. Bullock and you reminded me of Ryan's evil downfall. Wasn't she responsible for the breakup of her 10+ year marriage to Dennis Quaid?

I was only picking, Sally... actually the frowny face was more because I was trying to remember a recent post in which I mentioned something about $45. It took me a second to figure out that it was a reference to "my two cents."

As for Meg Ryan and Dennis Quaid, they were both responsible for the dysfunction of their marriage - Dennis Quaid was supposedly a philandering alcoholic/cocaine addict. I think she put up with it quietly (and when all this came out, it also didn't help her image). But her tromping around with Russell Crowe was the official start of the end of the Ryan/Quaid marriage.

An interesting tidbit about Bullock - Her mother Helga was a professional opera singer. She actually sang on one of Bob's songs on his Lonelyland CD - Round and Round. It wasn't long after Sandra's and Bob's breakup that her mother died. Also, she had one of Bob's songs featured on not just one, but TWO of her movie soundtracks - Bullets (on Miss Congeniality) and The World Exploded In Love (Divine Secrets of the YaYa Sisterhood). I discovered Bob when he was the lead singer for The Scabs/The Ugly Americans - they'd perform fairly regularly at Juanita's. He went solo years later, and several members of the band also went on to successful solo careers.

On a somewhat related subject, Cap'N Kirk is my favorite Bob Schneider song. Cute video, too. :)

Mod
Heidi wrote: "a recent post in which I mentioned something about $45"

Sally wrote: "Heidi wrote: "a recent post in which I mentioned something about $45"

I am VERY impressed with Heidi's 90s movie mavenness.

Jesus Hell, Heidi, did you pull all those names off the top of your head?

Natalie Portman is another, higher league of her own, I think. And Renee Zellweger makes me want to vomit. I have little to say on the others. Jennifer Aniston is great-looking but I've never seen her as much of an actress and she kind of plays the same person over and over again, from what I can tell. Oh, you know who we forgot? Kate Hudson. But she's more this decade than last, right?

Mod
I don't think RA and I have the same taste in women whatsoever.

That's ok. We could hang out at a bar, then, and not worry about hitting on the same girls.

Mod
What if the bartender were a girl? Does that do it for you like baristas and librarians?

Hm. Bartenders intimidate me a little. I figure they're used to guys hitting on them all the time, and I'm not ready for that type of rejection.

Baristas, by the way, just tend to be good looking...they don't do it for me as a general rule. I'm in a coffee shop right now. Let me check.

She's decent looking, I see her all the time, but she's way young, and once we chatted about the wedding magazines she was reading when I ordered my coffee, so I find her more sweet and friendly than anything.

I like Joey Lauren Adams a lot and think she's vastly underrated by Hollywood.

I wouldn't include Natalie Portman on a list of hot leading ladies from the 90s, as she was still a teenager when the decade closed. All of her adult roles have been in the 00's. I'd also put Julia Stiles in the '00s. Isn't she still in her 20s?

Mod
Yeah, I had thought about Julia Stiles and realized that perhaps the first movie I liked her in was 1999 - Ten Things I Hate About You and she was quite a kid then.

Sally wrote: "Yeah, I had thought about Julia Stiles and realized that perhaps the first movie I liked her in was 1999 - Ten Things I Hate About You and she was quite a kid then."

I really liked that film. It was a cute retelling of The Taming of the Shrew.

Yes. I came up with all those off the top of my head, RA. I didn't forget Kate Hudson - she never really plays girl-next-door characters. I considered her for the list, but decided against her for it. She's one of my faves, btw. Jennifer Aniston was great in The Good Girl. Another I forgot - Julianne Moore. Have I mentioned that Renee Zellweger's from my hometown? She is.

If you see her around, Heidi, could you ask her why her face is all smushed together?

Rumors are flying that Sandra Bullock's husband is cheating on her...don't know how he feels about Meg Ryan, though.

RandomAnthony wrote: "If you see her around, Heidi, could you ask her why her face is all smushed together?"

I can't believe Jesse James is a cheater, I am so disappointed. As of news this minute, Sandra moved out on Monday. And wow the woman he's been having an affair with even has a tatt on her forehead (as well as everywhere else on her very hot bod :O )