note: This topic has been closed to new comments.
16 views
Feeling Nostalgic? The archives > Classic Albums

Ok, first off, this is not a "list your favorite albums" thread. This is a thread in which you should pick one album that is particularly wonderful and extol its virtues.

The classic album with which I will start is Prince's Purple Rain, one of, in my eyes, the most influential albums of the last thirty years.

Think about it...a diminutive black guy obsessed with purple from Minneapolis revolutionizes (um...pun intended?) the blend between funk/soul and rock and roll and becomes sex on a (rather small) stick in the process. He takes no prisoners here...but it's not bragging if it's true, right?

Prince goes for broke and emerges victorious. The guitar solo in "Let's Go Crazy?" Amazing. And what about the one in the title track? And no bass in "When Doves Cry"? Wow. So many great songs...but the "I Would Die For U/Baby I'm a Star" stretch might be my favorite.

Skip the movie, though. But what a great, life-affirming album. I assert, ladies and gentlemen, that Purple Rain is a classic.

Mod
Madonna's True Blue. Love that album. Know it all.

The Who's Who's Next. Yes, it's my favorite album ever, but it's the most assured, confident, raucous, life-affirming, righteous, ass-kicking rock album ever made. It's also the prime example of Pete Townshend's songwriting genius, considering how Who's Next was envisioned as Lifehouse, a multimedia project that inevitably collapsed under the strain of ridiculously high expectations. With the exception of My Wife, every song on Who's Next was part of the Lifehouse song cycle, yet each song stands alone without you having any knowledge of the story's narrative (believe me, it's confusing).

Starting with a jolting synthesizer riff, Baba O'Riley is one of the best opening tracks ever, a call-to-arms to join together and move past the "teenage wasteland" of materialism and self-absorption. Followed by the stunning Bargain, a joyous shit-stomper affirming love to something that brings you purpose in life. My Wife, a John Entwistle contribution, is a darkly hilarious look at marital suspicion. Goin' Mobile is just sheer fun, the kind of song you play on the open road while driving a convertible with the top down. Behind Blue Eyes is one of the angriest ballads you'll ever hear, a rueful mediation on misunderstanding and betrayal. Finally, we come to one of the most monstrous rockers ever committed to vinyl, the glorious anthem Won't Get Fooled Again. Another jolting synth riff, more jagged high-volume riffing from Townshend, fluid bass lines from Entwistle, thunderous, high-octane drumming from Keith Moon, and that banshee scream by Roger Daltrey...wow.

When the band laid down the final tracks for the album, they knew these songs cold, having played them live for months, yet there's nothing stale or predictable about the performances.

There are many great rock albums, but if you're asked to choose one that affirmed the notion that rock n' roll can save the world, it's Who's Next.

Gus wrote: "The Who's Who's Next. Yes, it's my favorite album ever, but it's the most assured, confident, raucous, life-affirming, righteous, ass-kicking rock album ever made. It's also the prime example of Pe..."

Talk to my wife. She might be willing to at least trade me for something of equal value. 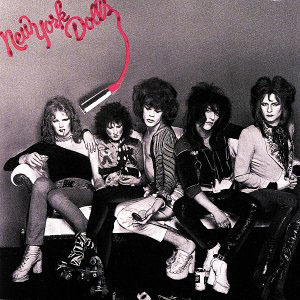 Cooda been. Shuda been. When trying to explain to neophytes just how The New York Dolls nearly ruined my life, I struggle with whether to come down on the "tough luck" or "charmed life" side of the fence.

Either way, just like The Stooges and the Velvet Underground, the Dolls' message would only be appreciated - and exploited by others - long after they'd gone. Their reputation is based as much on their cross-dressing, mutant Revlon cover girl good looks and radiation-mutated R&B sonics as the copious amounts of demon alcohol and industrial-strength chemical enhancements which colored and ultimately darkened their world, all attractive qualities to a kid weaned on the Stooges and MC5.

If this debut album (and its cover) didn't exist, there's no way you could ever invent it. It all sounds like it could fall apart at any minute - that's a good thing - the best night of your life crammed into one double-sided slab of black vinyl and alive with the sound of five guys not so much reinventing the wheel as fitting it with shiny chrome mags and raised white lettering.

David Johansen's phlegm-that-swallowed-Nebraska howling is the perfect foil for the guitars of Johnny Thunders and Syl Sylvain, which snarl, spit, and howl like a box of mongooses, cobras, and feral cats shaken up then fed into a wood chipper and while Nolan and Arthur “Killer” Kane may not have been bothered about studio gigs by Berry Gordy or the Funk Brothers, they nail the back beat to the floor then douse it with sprinkle of pomade, Night Train, and jaundiced blood. Producer Todd Rundgren and the band bring out the best in each other, like beer and barbeque.

And much like a cat or dog around a Vietnamese restaurant, not a bad cut to be found.

Is that the "Lady in Red" guy?

Are the New York Dolls better in theory or in practice?

RandomAnthony wrote: "Are the New York Dolls better in theory or in practice?"

They used to be better in practice, but after last year's "Cause I Sez So," I'd have to go with theory.

The reunion was fun while it lasted, but that album - save for a few songs - flirts dangerously with sterility, like Barbara Billingsley at the breakfast table in high heels and pearls.

I love this one: 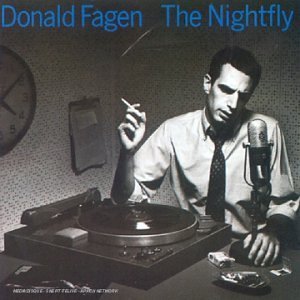 Every song on here is polished perfection, a little short story evoking life in the 60s, all delivered in Donald Fagen's sardonic drawl. Love it, love it, love it!