Dignified, tall, and handsome, with clean-shaven chin and side-whiskers, Chester A. Arthur "looked like a President."

The son of a Baptist preacher who had emigrated from northern Ireland, Arthur was born in Fairfield, Vermont, in 1829. He was graduated from Union College in 1848, taught school, was admitted to the bar, and practiced law in New York City. Early in the Civil War he served as Quartermaster General of the State of New York.

President Grant in 1871 appointed him Collector of the Port of New York. Arthur effectively marshalled the thousand Customs House employees under his supervision on behalf of Roscoe Conkling's Stalwart Republican machine.

Honorable in his personal life and his public career, Arthur nevertheless was a firm believer in the spoils system when it was coming under vehement attack from reformers. He insisted upon honest administration of the Customs House, but staffed it with more employees than it needed, retaining them for their merit as party workers rather than as Government officials.

In 1878 President Hayes, attempting to reform the Customs House, ousted Arthur. Conkling and his followers tried to win redress by fighting for the renomination of Grant at the 1880 Republican Convention. Failing, they reluctantly accepted the nomination of Arthur for the Vice Presidency.

During his brief tenure as Vice President, Arthur stood firmly beside Conkling in his patronage struggle against President Garfield. But when Arthur succeeded to the Presidency, he was eager to prove himself above machine politics.

Avoiding old political friends, he became a man of fashion in his garb and associates, and often was seen with the elite of Washington, New York, and Newport. To the indignation of the Stalwart Republicans, the onetime Collector of the Port of New York became, as President, a champion of civil service reform. Public pressure, heightened by the assassination of Garfield, forced an unwieldy Congress to heed the President.

In 1883 Congress passed the Pendleton Act, which established a bipartisan Civil Service Commission, forbade levying political assessments against officeholders, and provided for a "classified system" that made certain Government positions obtainable only through competitive written examinations. The system protected employees against removal for political reasons.

Acting independently of party dogma, Arthur also tried to lower tariff rates so the Government would not be embarrassed by annual surpluses of revenue. Congress raised about as many rates as it trimmed, but Arthur signed the Tariff Act of 1883. Aggrieved Westerners and Southerners looked to the Democratic Party for redress, and the tariff began to emerge as a major political issue between the two parties.

Arthur demonstrated as President that he was above factions within the Republican Party, if indeed not above the party itself. Perhaps in part his reason was the well-kept secret he had known since a year after he succeeded to the Presidency, that he was suffering from a fatal kidney disease. He kept himself in the running for the Presidential nomination in 1884 in order not to appear that he feared defeat, but was not renominated, and died in 1886. Publisher Alexander K. McClure recalled, "No man ever entered the Presidency so profoundly and widely distrusted, and no one ever retired ... more generally respected."

Here are books in my library:

Mod
Thank you Bryan. Have you read either of these two and what recommendations might you make regarding them. Nobody talks that much about Chester Arthur; except from his White House biography he sounds like quite a guy (smile).

I appreciate your adds; you have quite a library on Presidential reads.

Thanks, Bentley, I have a growing Presidential history library at home that is for sure.

I have read both and would recommend them. I like Reeves a bit better because it is a full scale biography, while Doenecke just covers his presidency in the Univ Kansas Press series.

Here is the Arthur entry in the Time Books Presidential Series. I have not read this one yet:

Zachary Karabell
From Booklist:
Presidents come no more obscure than Arthur; in this American Presidents series volume, Karabell shows why. Arthur's papers were destroyed shortly after his death, which makes guesswork out of ascertaining his thoughts about his administration. More important to his least-known status is the fact that he didn't want or expect to be president. A consummate Republican Party hack, he obtained the then enormously important position of U.S. customs collector in New York via the then-legal political spoils system. Asked to be Garfield's 1880 running mate, he dutifully obliged. Inaugurated in March 1881, Garfield was shot in July and died in September: Arthur was president. He rose to the occasion, angering Republican bosses, but didn't sacrifice the short working day to which he was accustomed. His light management style was okay for an era in which presidential politics mattered far less, his reform of the still-new civil service was a crucial early step toward "big government" in the twentieth century, and most important, Karabell suggests, he was a gentleman among knaves.

(no image) Chester A. Arthur, A Quarter-century Of Machine Politics by George Frederick Howe

His adult home is not a museum, but it is still around in NYC: 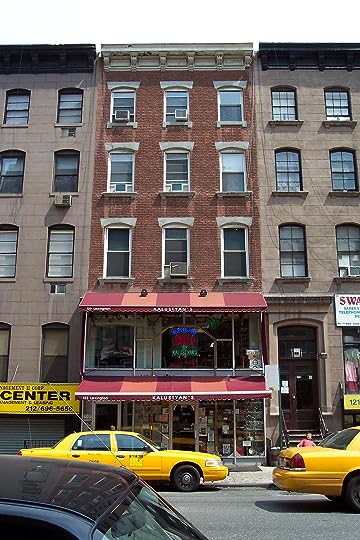 Mod
That is fascinating Bryan, who would have known that this was his former home. I never realized this. Will take a trip into NYC and look this building up. Surprised that the location has not been made into an historic location.

I'm sorry it hasn't either. I believe TR's NYC home is a museum.

Arthur deserves a place for people to learn more about him :-(

Mod
Yes, and that NYC home I have been to; it is a location which is run by the National Park Service at 28 East 20th Street.

Great restaurant down the street - a fave of mine - Gramercy Tavern.

I agree that Arthur seems to be shortchanged.

Backdrop on how Arthur became president:

Destiny of the Republic: A Tale of Madness, Medicine and the Murder of a President

James A. Garfield was one of the most extraordinary men ever elected president. Born into abject poverty, he rose to become a wunderkind scholar, a Civil War hero, and a renowned and admired reformist congressman. Nominated for president against his will, he engaged in a fierce battle with the corrupt political establishment. But four months after his inauguration, a deranged office seeker tracked Garfield down and shot him in the back.

But the shot didn’t kill Garfield. The drama of what hap­pened subsequently is a powerful story of a nation in tur­moil. The unhinged assassin’s half-delivered strike shattered the fragile national mood of a country so recently fractured by civil war, and left the wounded president as the object of a bitter behind-the-scenes struggle for power—over his administration, over the nation’s future, and, hauntingly, over his medical care. A team of physicians administered shockingly archaic treatments, to disastrous effect. As his con­dition worsened, Garfield received help: Alexander Graham Bell, the inventor of the telephone, worked around the clock to invent a new device capable of finding the bullet.

Meticulously researched, epic in scope, and pulsating with an intimate human focus and high-velocity narrative drive, The Destiny of the Republic will stand alongside The Devil in the White City and The Professor and the Madman as a classic of narrative history.

Chester A. Arthur: A Quarter-Century of Machine Politics

(no image) Chester A. Arthur, A Quarter-century Of Machine Politics by George Frederick Howe (no photo)

As can be expected for an obscure one term President the books pertaining to Chester A. Arthur, the nation's 21st President, are limited. This now out of print volume by Howe is a straightforward read and does a good job at fairly presenting the life of Chester Arthur. There is perhaps no President that made as dramatic a shift as Chester Arthur. An operative of the New York machine under Roscoe Conkling, Arthur was a poster boy for the corrupt system of patronage in the 19th century and was basically added to "balance" James Garfield on the ticket (both geographically and politically) who was a strong proponent of civil service reform. Following Garfield's assassination Arthur assumed the Presidency and took a much more centrist approach than would have been expected given his past, and much to the dismay of the Conkling machine. While not the most engaging of biographies this 50 year old book does not read as dated as one might expect. It is clearly written and of an appropriate length to adequately provide the reader with all they are likely to care to know about Chester A. Arthur.

Mod
Thank you for all of these adds.

The Unexpected President: Chester A. Arthur--His Life and Times

by Scott Greenberger (no photo)

When President James Garfield was shot, no one in the United States was more dismayed than his Vice President, Chester Arthur. For years Arthur had been perceived as unfit to govern, not only by critics and his fellow citizens but by his own conscience.

From his promising start, Arthur had become a political hack, a shill for Roscoe Conkling, and Arthur knew better even than his detractors that he failed to meet the high standard a president must uphold. And yet, from the moment President Arthur took office, he proved to be not just honest but courageous, going up against the very forces that had controlled him for decades.

Arthur surprised everyone--and gained many enemies--when he swept house and courageously took on corruption, civil rights for blacks, and issues of land for Native Americans. His short presidency proved to be a turning point of American history, in many ways a preview of our own times, and is a sterling example of how someone can "rise to the occasion."

This beautifully written biography tells the dramatic, untold story of a virtually forgotten American president, a machine politician and man-about-town in Gilded Age New York who stumbled into the highest office in the land only to rediscover his better self, right when his nation needed him.

The Accidental President: Chester A. Arthur

by John Pafford (no photo)

When he was nominated as vice president on the 1880 Republican ticket, Chester Alan Arthur had never held elected office. Expectations of him—or of the vice presidential office—were virtually non-existant. Years earlier in 1839, Daniel Webster had turned down the vice presidency with the quip, "I do not propose to be buried until I am dead."

But six months into President James Garfield's term, he was assassinated—and the unknown vice president, Chester Arthur, became the most powerful man in America.

This in-depth biography of Chester Arthur is a fascinating look at a man who, thrust unexpectedly into the highest political office, exceeded expectations and left a lasting mark on history, despite being diagnosed with a debilitating illness shortly after assuming the presidency.