It creeps me out.

Ick! It's like the tiny monsters in Little Miss Sunshine.

Anyways I used to know a woman who would put her daughter in all those pagents and competitions. Sweet little kid. She had gorgeous hair, often braided, bunned, put up of down in some fancy way. You could see how much effort her mother was putting into it. And it all went just fine for a while. but then the kiddo started pulling on the hair compulisively, tearing it out one by one until it came to the point that there were bold patches on her head.

Trips to shirnks followed. It got better for a while, then worse, then it was suggested all the hair should go, but as soon as it started growing back the girl was at it pullig hair one by one yet again.

And so it goes. She's screwed up for life.

And you might say: it's only hair, who cares. But it's so much more than that, because come high-school and the girl will be laughed at and teased to death, and then there's guilt and poor self-esteem. Besides however you cut it bold patches on the head are yucky. Just like that make-up on those little girls. It all starts with make-up.

I went to high school with a girl who pulled out chunks of hair during class and left the little tufts inside her desk. She had super short, platinum blond hair. She had bald patches too. She was "punk" with crazy make-up and clothes. I'm sure she was fucked in the head but as a look, the bald patches sort of worked for her.

It's a mental illness I think. They have a name for it... trik? I think it was trick.

My daughter is very much a girlie girl, but she will not wear make-up until she’s sixteen or so. And she is not wearing a baby bikini. WTH is that about? I don’t care if y’all think they’re adorable – only a disturbed mind would put their infant/toddler etc. in a little two-piece.

I put some make-up on my daughter for her dance recital but it was nothing like what you see above.

My father, who's only goal in life is to torture me, gave my daughter a make-up set for Christmas. Every morning she was begging me to wear it to school. Fuck no.

As for the two piece, I agree baby bikini is creepy, but baby two piece with a tank top makes sense if the kid is still in diapers and you don't want to try to peel off a onesy every time she needs a change.

That's a really good point. Or if your kid has a super long torso and every one-piece bathing suit shows her nipples. Then a baby bikini might actually be more appropriate.

(Bunny, I had a dream that I met you at an awards ceremony! You gave me a big hug.)

I'd give you a hearty handshake.

I'm sorry - you're right. A handshake would be much too forward. I'd nod briefly and wish you good day.

Your punishment for trying to give me a handshake would be a bear hug.

Gretchen wrote: "It creeps me out.

There's a fine line between Barbie and human. 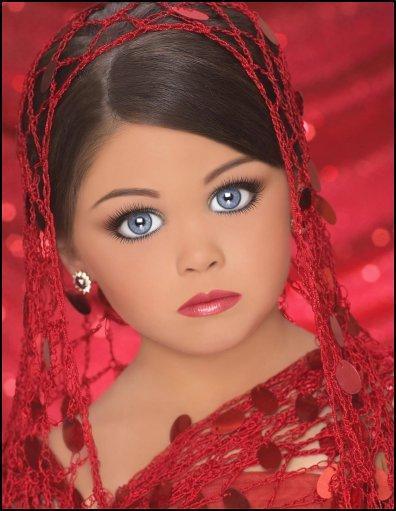 These fake eyelashes make me want to chuck myself in the river: 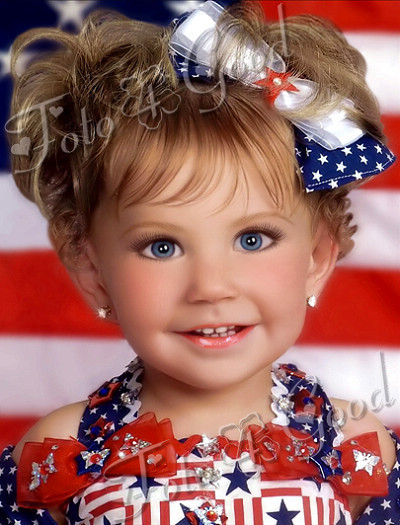 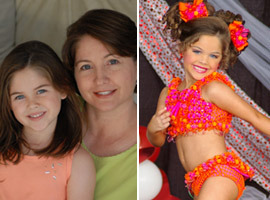 I guess it's lucrative, though: 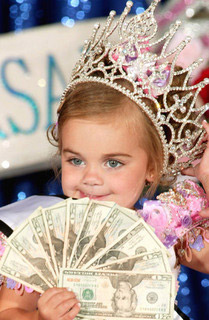 I'd feel more comfortable with Ted Bundy, though. He was a lot quicker. And he never bothered with trying to kill your soul.

I hope someday our society will progress to the point that we can build little robot girls for the crazy asshole moms to dress up like hookers. Then they can leave the real children alone.

Don't you know, Gretchen, messing up the little kid is half the fun?

just sick, they all look like baby prostitutes! i also hate it when little girls dress skanky, i was at the movie theater a while ago and saw a 7 or 8 yr old with a thong sticking out from her mini skirt which hit her right at the vage : P