Did anyone else read this? I must admit, I read the first half and skimmed the second, but I will read more closely if anyone wants to discuss.

Without giving away any spoilers, it presents the question of whether there is more than one way to burn a book? My P and I have had a similar discussion about teaching Huckleberry Finn in high school.

I found a great deal of it to be compelling, but got swept into Howards End for my other group. (Which we should ABSOLUTELY read - I haven't read it since high school and realize why I LOVED it so much).

Mod
Sorry, this is by the way, but did anyone notice F 451 isn't in the 1001 Books you must Read Before you Die? There's actually no Ray Bradbury.

There are a lot of books that aren't on that list that should be. There are also a lot of terrible books on there.

Mod
Agreed, Emily. I just can't imagine someone reading 1001 books without getting to a book about books.

I found this book really intersting. It wasn't the easiest to follow, but I typically like those "utopian future" books that really get you to think about society. I read this with my friends in book club. We all drew so many parallels to our current civilization that it got kinda scary!
I can't imagine a world without books, but there were more subtle parallels. For example, how Millie spent much time listening to her shell...sounds a lot like ipods. Or, how Clarice pointed out that people didn't spend enough time enjoying nature and the simplicities of life; everyone was too wrapped up in their trivial, immediate surroundings that held little meaning. I see a lot of this going on even today. It makes me appreciate the little things, like a day in the park or a good book, so much more.

Oh yeah, another major parallel to our modern civilization I forgot to mention:
Well, our world isn't without books, but there ARE banned and restricted books. Also, many people don't have access to books. I can't imagine a world where NO ONE is allowed to read books, but even today, some books aren't allowed (at least in some parts of the world).

Excellent points, Dana! In fact, the reason I started reading Harry Potter all those years ago is that they were banned in some Southern and Midwestern schools (the first book, before they got HUGE), because the kids were disrespectful to the bad adults. I figured if a school was going to ban it, it had to be good.

Lol, I know, but one of the reasons cited in this article I read was their attitude towards adult authority. (I'm sure witchcraft was in there and I blew it off). Which is hilarious to me. Hmmm. . . . I am starting to crave a HP re-read (at least of 6 and 7)

I know!! I've been wanted to re-read them since Michele mentioned it a month or so ago. And this is usually the time of year I read them. But I'm trying to wait and re-read them right before the movie comes out.

Lol, me too. I am so glad they broke 6 in half! They might actually have a bit more time to flesh the book out a little. I am packing and I have an entire book box marked "Harry Potter. Living Room." We're junkies.

Me too!! I even love the video games.

Um, yeah! We have a kilowatt hooked to our GameCube, so when you push to make Harry reach for the snich, you almost feel like flying.

Mod
Okay, not sure how this got to be an HP discussion, but have I mentioned that I was down in the Hollywood area for the last book's opening and I decided to go to the B&N party in costume? I went as Rita Skeeter and from the moment I walked in I knew what Harry must have felt on being a sort of celebrity. I mean, I had EVERYONE staring and "discussing," I was literally asked for my autograph several times, so many people wanted their picture with me I gave up on participating in any of the events they had going on, I had kids - little kids - use the word "uncanny" to describe how much I looked like her, and then I won the costume contest which I never actually entered (I'd had the several of the staff tell me separately that they'd be really angry if I didn't win). For first place I got to buy the first book sold there that night (I thought I'd be there hours)! I also got a free light-up wand - it's really cool!

Because I had so much time on my hands, I went out to a local club... with book and wand, in full costume! I was particularly popular that night. Hee!

Michele, isn't that fun?? Brent and I went as Cornelius Fudge and Professor Umbridge, and our friends went as Trelawney and Tonks, and we had people stopping us ALL NIGHT. We went after a performance of How To Succeed, so we were too late for the costume contest, but I saw the ones who won and I think one of the four of us would have beaten them. 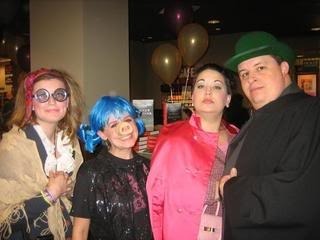 My friend who was Tonks had 4 different color wigs and 3 different animal noses, and she kept changing them as we walked around.

Mod
You don't have enough of a frog face for Umbridge! Your friend that played Tonks was very clever with the changing thing.

I had gone to the craft store and picked up bunches of colored feathers and gave these "quills" out to the kids here and there. Mine was a nicer one, and instead of acid green my quick quotes quill was red.

When I first got there I started in character questioning the kids that came up to me with an accent even. But they were in too much awe of me then (even the big ones) so I started laughing and talked normally. But it was fun!

*Try to figure the picture posting later. Too complicated. Ergh!

If you email it to me, I will post it for you.

Michele, you look so cute! 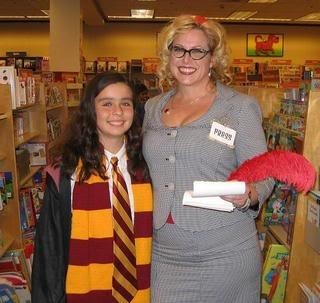 Well my book does not have a Coda.. wish it did so I could check it out. Also love the HP chat.. and the picks of you guys are great! It is a shame that there are no more books...But I am real excited about the theme park, here is some info I found on it:

"The Sunday Mirror is reporting that Harry Potter author J.K. Rowling has written “a brand-new Harry Potter story which is being turned into a mini-movie” that will star the trio of Dan Radcliffe, Emma Watson and Rupert Grint. The UK tabloid also says filming will take place at Leavesden Studios in England before they begin filming on Harry Potter and the Deathly Hallows next February. Additional quotage ” “They are also working on extra sequences and clips which will be part of the rides. J.K. Rowling has been involved in everything. She wrote the story.”


And did you guys check out the prequel story that JK wrote? It is 800 words or so and done for charity?

For those who are interested here is a link to the story:

Mod
Wow! That's so great! I had no idea she was working on a prequel! I'm so excited!!! And who the heck was chasing them?? Heh. Good info, Angie. Man girlie, you are IN THE LOOP!!

It is actually not going to be a book.. at least not yet. Those 800 words were for charity and that was just a short story she wrote. Whoever bought it released it to the public for us to read. I wish it was going to be a book!

Mod
Did you read what she said at the end of it, though?

Oh. Ha-ha! Just looked again to be sure. I kinda skipped the word "not" in there! Hahaha! I thought it said, "From the prequel I am... working on." Over zealous, me!

We can only hope.. I mean that short story was great! Those 800 words are so exciting!

FYI: There is a rumor that a teaser trailer for the new Harry Potter movie will be playing with the Dark Knight. I really hope they show it, exciting!