Sandmorphing: This is a purely defensive skill. It is the ability for Amatsu to morph his body into sand. The sand is black in color, the amount of sand is formed by the mass of Amatsu's body. He cannot create more of the black sand or less of it. In this form, Amatsu cannot use any other magics nor attack. The weakness of this ability is again water, water causes and to compact into mud. If Amatsu is in normal form and get's wet, he cannot transform into sand.

Geokenesis: This is the ability to control earth itself. This is most commenly used to attack with rock or ground, using his mind to lift large chunks of rock to throw at an opponent. If Amatsu uses a lot of energy, he can even change the terrian of battle, such as creating sinkholes or large hills of rock, even pleatues. Amatsu can sink an opponent into the earth. If Amatsu is near a mountin, he can use his power to create a rockslide, just as if he is near a faultline he can cause an earthquake. This ability gives Amatsu the power to minipulate any earthen materials, from rock to precious gems. One of Amatsu's more usefull abilites although more energy consuming, is the ability to tunnel through the earth. The one form of earth Amatsu cannot control however is mud.

Plant control: Amatsu has the ability to control plants. In order for him to use this, there has to be a plant of some sort avalable. Amatsu can cause the plant of choice to grow at a rapid rate as well as change the plants shape. Such as causing a tree's limb to wrap around someone. This ablility is usually used in area's that are heavily wooded.

Metal Kenesis: The ability to control metal much like he would earth. Amatsu can only control existing metal around him, or pull metal from the ground. He cannot change the mass of the metal, only it's shape. This ability takes a lot more energy and concentration for Amatsu and because of this it is rarely used.

Strengths: Amatsu is a very fearsome warrior. His attacks are fierce as fire and he also has good defense using his earth magic. His attacks come hard and fast and are even harder to defend against.

Weaknesses: Amatsu focuses more on attack then defense. He prefers to just attack, attack, attack, and break down his opponents defenses. Because of this he is often left open for others to attack him. He is also slow to use his intelligence in battle, although he will create a plan of nothing else works" (Demon..xD)

Name: Nyx
Age: 462
Gender: female
Personality:
Kin: she has a brother
Crush: nope
Appearance: She is a very strong and lean female demon. She has long, powerful legs and a graceful slim figure. She has a grey coat that is almost white and grey eyes that can fade to white or a violet color. Her tail is long with black at the end. She has a black diamond birthmark in the center of her forehead: http://media.photobucket.com/image/de...
Personality: Easily provoked. She has a very short fuse and is easily angry. Shes also independent, and really hates guys when they try to come on to her, which doesn’t happen very often because she has that ominous air about her, but when it does she get angry…angry enough to attack
History: When Nyx was a pup her father killed her mother and three sisters. She was the only one to get away from the gory attack. Her mother named her after the Greek goddess Nyx, sister of the god of darkness. She was very close to her mother, and when her father killed her, she became spiteful and in want of revenge. Her father tried to murder her, but somehow, in a way she doesn’t know, she became a demon. She possess the powers of:

Materialism: She is able to materialize and dematerialize from one place to another. Basically she concentrates and her body completely blurs out, breaking her down into tiny particles that teleport her to another point

Shadow: She can fade into the shadows, literally. She focuses and her body basically becomes invisible into the shadow. However, if she goes into the light in her shadow form, she is revealed as a shadow and able to be seen.

Spirits: Somehow Nyx is connected to her mother and dead family members in ways that no one can process. She can hear the thoughts and whispers of spirits when she uses her mind and can ask for their advice. Only sometimes does she randomly become overcome with their voices and then she blacks out.

Amour: She can bristle and use her fur as a shield, but it doesn’t last long and only works around her back.

Weakness: When she gets hit in her underbelly at all. Also, the diamond birthmark on her forehead is a very weak point. If she gets hit there, her powers will falter for a short period of time, leaving her utterly defenseless.

Um, I'm not very sure about this, is this werewolves, or what?

Name: Shadow
Age: 582
Gender: male
Personality: Very tough and cold, isolated, arrogant, protective. Shadow is especially protective on Nyx. The pair have been best friends since she became a demon wolf, but over the years Shadow developed feelings for her. He's a terrible flirt and is always trying to persuade Nyx from her non-mating ways. Of course, theyre both stubborn, which gets them no where and often leaves them fighting with eachother and angry beyond belief. Shadow takes pride in the fact that he's strong. He might not be as graceful as Nyx but he's fast and powerful, a good and steady hunter with great reflexes and superb intellect. He always has to state himself as the alpha male around other males, especially with Nyx, because he thinks she's attracted to his arrogance.
Kin: dead
Crush: open/Nyx
Appearance: 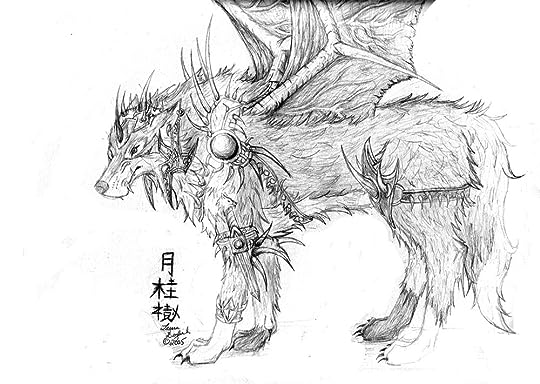 Basically he's big, he's powerful, and he's threatening looking. And he will hurt you.
History: Not much here...he doesnt talk about it
Other:
-Sonic Bark: he can wipe out a certain range using one powerful bark
-Super speed: gives him the ability of running super fast
-weakness: other than Nyx would have to be the fact that his arrogance leaves him defenceless...he thinks he cant lose