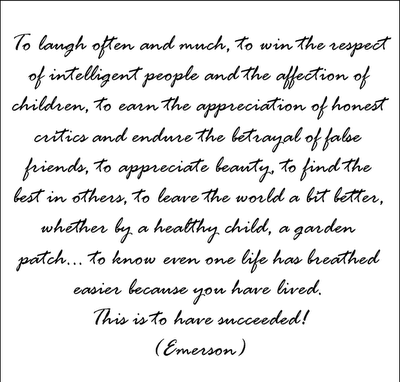 That Poem/Insight/Quote is wonderful! I really like how he shares what defines success to himself. Heather's generous contribution now is going to be incorparated into every facet of my life! Wonder why I didn't check this post out sooner! =)

No thank you! Where did you get this? Did you scan it or find it on a website? Wish I could find such knowledgeable information like everyone here does!

I found it on a website, I can't remember which one. I was browsing his more famous quotes because he is one of the few poets with whom I am more familiar. This one happened to be my favorite.

I love that poem, thanks, Heather.

Happy Patriots' day!
(Only in MA and ME it is a state holiday; held annually on the 3rd Monday in April.)

Emerson wrote this poem which was sung as a hymn on July 4, 1837 ceremony to mark the completion of the Concord Monument to immortalize the resistance of American Minutemen to British forces on April 19, 1775.

By the rude bridge that arched the flood,
Their flag to April's breeze unfurled,
Here once the embattled farmers stood,
And fired the shot heard round the world.

The foe long since in silence slept;
Alike the conqueror silent sleeps;
And Time the ruined bridge has swept
Down the dark stream which seaward creeps.

On this green bank, by this soft stream,
We set to-day a votive stone;
That memory may their deed redeem,
When, like our sires, our sons are gone.

Spirit, that made those heroes dare
To die, and leave their children free,
Bid Time and Nature gently spare
The shaft we raise to them and thee.

http://en.wikipedia.org/wiki/File:Old...
The Old North Bridge across the Concord River is a historical site in the Battle of Concord, the first day of battle in the Revolutionary War. The Old Manse, Emerson's ancestral home (and later residence of writer Nathaniel Hawthorne), is immediately adjacent to the North Bridge and less than a hundred paces from the spot where the battle took place. In November 1834, Ralph Waldo Emerson moved into the Old Manse and wrote his first draft of "Nature."