Here is a link to the teaser poster...

It looks so sexy! 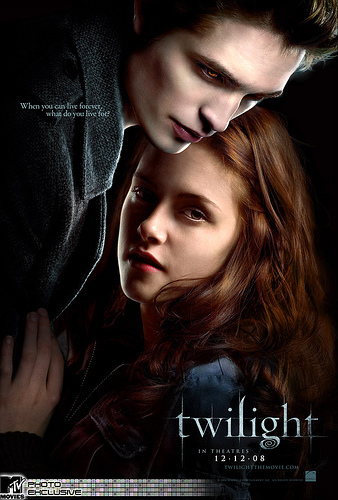 She looks younger to me in the poster than she does in the pictures from set. I think people are having difficulty with the way Bella looks because Stephenie Meyer doesn't give a detailed description. She wanted the reader to picture Bella how they wanted to. So now there are so many images of Bella, I'm not sure she can look like what any of us thought.

that dude playing edward is creepy!!!eee! and the girl playing bella is far too pleasent on the eyes. shouldn't we be seeing someone who appears to represent what bella was seeing?

The girl who plays Bella is really pretty...but isn't Bella supposed to be average-looking? And Edward looks CREEPY!!

I agree w/ you about Edward. He is on the creepy side...Bella thinks she's average-looking, but she's really quite pretty. although I'm not saying I approve of the cast choice...I think they'll do OK oveall though.

OMG!!! I saw the trailer for the Twilight movie in the theater!!!! It looked so different then it did online, although it was the exact same thing...more official. I am not ashamed to say that I squealed. loudly. let's just say I got some weird looks from ppl...

Heather, what movie did you see when you saw the trailer?

I have seen this actress in a few movies and I think she is a good fit. She isn't drop dead gorgeous and but beautiful in a way that you can see why Edward would be intrigued by him.
I do this Edward is creepy in the poster, but I think I will reserve judgement until I see the trailer or the movie. But he does need to be somewhat creepy.

I have been to a lot of movies lately, one a weekend it seems and have not seen the trailer played with a movie. But I would like to see it in the theater.

I think Kristin Stewart is perfect for Bella--I've seen her in several movies (like Speak, Into the Wild, In the Land of Women, The Messengers) and she has this awkwardness to her that I think Bella would have, considering she's so clumsy.

I know Bella thinks of herself as "average-looking," but Stephenie Meyer described it as her being average when she lived in Phoenix, but once she moved to a small town in the middle of nowhere, she was new and unusual and therefore attractive to the guys there. I think they have made her look sort of "plain" to be the Hollywood equivalent of "average."

As for Edward... I am not sure. His role in Harry Potter was really too small and confined to show me that he is a good enough actor to pull it off. But then, Anne Rice had an issue with Tom Cruise being cast as the Vampire Lestat, only to take it back after she saw the movie--I wouldn't necessarily have cast Tom Cruise as a vain vampire either, but he fit the role really well. So, Robert Pattinson might surprise us all.

I can't wait to see what Jacob looks like, since he's most likely going to be an unknown actor.

Do you think they're going to make movies of all 4 books?

Hopefully, they will!! I'm okay with most of the cast, except for Edward himself (don't think he fits) and his family. I don't think any of them look right. I think Bella is great, but Jacob Black- he's supposed to have longer hair, and it's not how I imagined him at all, although of course, it's never going to be like that.

Uhh WHAT MOVIE DID YOU SEE THE TRAILOR IN?!?!?!

I didnt think it was actually in movie theatres yet...you'd think it'd be all over the web if it was.

I don't think it has been in the movies yet either. I have been to all the summer movies and haven't seen it. And what did Lahari mean, you saw them in all the movies?

Are Edward eyes red? Or is just my computer?

AHHHH. Edward is gorgeous.
This picture is exactly how I pictured him...
but in the movie he sorta looks different.. and it's not the same.

And I didn't picture Bella's hair such a bright red. It's probably just the picture though.

I've seen the majority of the summer blockbusters too and I have not seen a preview for the movie! Dish please! Perhaps its only playing in certain areas. Then again I should be able to find it online through the production company's website right? Angie, see if you can find it! You're the super web sleuth!

HA I am the web sleuth, I just can't help myself!

Where did you get the poster?

OMG i love this poster
Edward just looks so protective and .. well vampirish lol and u can just see how Bella looks kind of vulnerable next to him and i LOVE those golden eyes :D

reply | flag
message 28: by [deleted user] (new)
Sep 05, 2008 11:42AM
I have this poster as my desktop picture. I was so surprised when I went to twilightthemovie.com and there were the desktop pictures..bella..edward..james..and then bella and edward.

i really don't like the girl playing bella, i'm not a big fan of kristen stewart. but i love that robert pattinson was chosen to play edward. he's gorgeous :) & he does remind me of a vampire

yeah i agree, they should have cast Alexis Bledel as Bella even though bella's eyes are brown Alexis could have worn contacts or something

I can't wait for this movie!