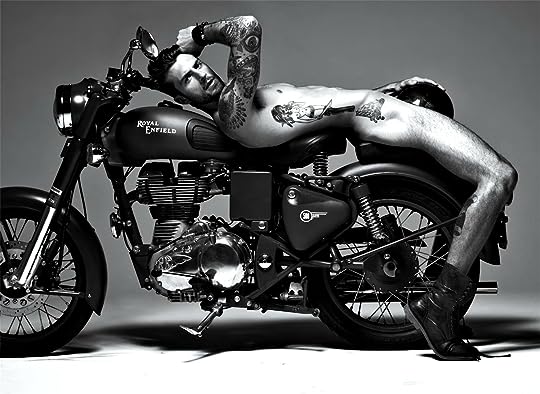 Personality: proud; arrogant; cunning; manipulative; seductive; tempting
Special Abilities: wish granting save some restrictions
Other: (view spoiler)[ sucre'd fiend wrote: "So, basically, Djinn feed off of fantasies and the emotions could result from them. They keep their meals incapcitated with a toxin they produce, and feed off them until they die. Usually from starvation or exhaustion because their minds are kept awake." (hide spoiler)]

All the exhaustion from the hike was replaced with a heady feeling of accomplishment, of wonder. He'd spent countless days and months researching, and then still more days hiking through the wilderness to get to where he is now. Nicolas, for the most part, could say that this was probably the biggest event of his life. It could make or break his thesis. It could make or break his entire future. If that didn't seem like something to freak out over, he didn't know what would be good to do so over. Well, he couldn't think much past holy fucking shit at the sight of the lamp before him.

It was golden, for one. Probably worth a lot even if it didn't hold a djinn in it. But, he couldn't think like that. This had to have a djinn in it, waiting for him to unleash. He'd do his reading up on the subject, but he knew better than to believe every word of a book. Or maybe he didn't know better, and he'd have to find that out the hard way. His steps were tentative, slow. Not just because the only thing moving them was adrenalin at this point, but because he wanted to savor the moment. He wanted to put everything into his mind and carry it around with him for the rest of his life. He wanted to be able to recount every detail of his success, and if that meant taking his time to get to something that he'd spent so long looking for, then so be it. He could wait a couple more minutes.

When his feet at last brought him to the lamp, his eyes had widened quite enough to fill in where they'd sunken into his skull from all the recent exercise he'd put himself through and his lips had parted with breathy chants of fuck. There was a reverence to his stance as he lowered himself to his knees, fingers wrapping around the cool metal of the lamp. He swallowed slowly, closing his eyes for a moment before he dusted off the lamp.

Contrary to popular belief, there was no agony in residing within the lamp. He had explained it as “simply existing” to a mortal who had curiously asked how it had felt to be contained within such a small living space, much like a babe within a mother’s womb before its birth. There was no pain though when he emerged, nor was there resistance when he returned; it simply… was.

He awoke; someone was beckoning him forth. Smiling within the darkness (though it was merely thought for he held no corporeal form yet), he willed himself to emerge from within his cocoon, and when he opened his eyes (now they existed), they alighted upon a male human, who’s visage brimmed with eager anticipation, and a fair amount of trepidation. “Who disturbs my slumber?” he queried in a deep, silken voice laced with an edge of steel. The boy was young in awhile—he had not served one quite so young, no, not since 1652—and it pleased the demon.

Never let it be said that a djinn did not enjoy his work, especially when it came in so sweet a package.

The mantra continued, the same holy fuck parted Nicolas' lips as he scrambled back from the creature he'd just released. Breathy laughter filled his lungs, threatening to spill out further as something else. He took a moment to get to his feet, eyes wide with wonder as he took in the figure before him. He'd known it always true, or at least he'd believed as such and now he really knew.

"You're real," he stated, yet another laugh escaping his lips. To be honest, part of him had been convinced that he wouldn't find anything. A very, very small part, but a part of him no less. He suspected that he would have given in to all the pressure that had been surrounding him the last few months, but now he wouldn't. Because he'd been right and everyone else was wrong.

"I have so many questions," he began, dropping the pack from his shoulders and fishing through it for his notebook, "I-I don't even know where to begin. My name's Nicolas, by the way. What's yours? How long have you been in that lamp? What's it like?" He paused, realizing that he probably hadn't given the djinn much time to answer any of those questions. "I'm sorry; just, really excited right now." A nervous grin and a shrug followed his words, as if to demonstrate for the creature.

Oddly enough the question of his existence had only seemed to be a matter of keen interest to his masters with the passing of time. In the days of Ali Baba and his forty thieves, no one found it strange that a djinn existed, but from what he had gathered, his kind had slowly become myth and legend. That did not make him any less “real” though, nor had his power diminished. Arching a brow at Nicholas’s torrent of words, the demon smiled, “I am Ahsan-ol-Kobar, Master, and here to serve.”

He stood before the boy completely nude and comfortable with the fact, his glorious physique resembling that of a human, and were it not for the subtle smoke that seemed to emanate from his being, Ahsan could have passed for a mere mortal. His hands rested comfortably by his sides and when it became clear that the boy expected him to answer, he did. “I have resided in this lamp since the birth of my existence. To be within the lamp is to ‘simply exist’,” he told him, his dark eyes taking in the precious features of the young one before him. “You have a right to feel as you do, Nicholas,” the djinn inclined his head with a subtle nod, “for what you see before you is worthy of your awe. How did you locate me?” the demon queried then, his own questions rising within him. It was always a pleasure conversing with mortals; their minds, so fleeting, were full of a vivacity that the immortal could never possess. Time, being of such importance to those with very little of it, always seemed to play a key factor in the shaping of human lives as well as their goals and desires.

It wasn't that Nicolas was oblivious to the nudity of the djinn, but he wasn't exactly paying close attention to it. Not until he was told to look at what he saw, and he really should have been paying attention before he got an eyeful of this djinn. Whatever words had been about to pop into his head as a response to Ahsan's question were halted. He blinked once, twice, looked away and his mind was back on track. Or, at least partly so.

"Word of mouth," he replied, pausing a moment before he went on, "As much as some people don't think you're, well, real, there are plenty of people who did believe in you. Kept it alive in their writing, in stories they passed down in their families, in art. I'm positive somewhere along the way everything was diluted by sensitivity or someone wanting to take claim to the story or a new spin added on to keep it interesting and fresh, but that was how I found you. People told stories and I listened." He shrugged, looking up carefully to the much larger djinn. "You don't have to call me Master, by the way. Just Nicolas is fine. And, uh, I can get you some clothes, if you wanted." His voice trailed off in a question of sorts, gaze darting down before coming right back up to rest on Ahsan's face.

The boy was educated; he liked that. And seemingly innocent; he liked that even more. The fact that Nicolas did not want to be called “Master” bode well for Ahsan, who enjoyed the role of teacher and student, with himself being the former. He had lived for thousands of years after all—it only made sense for him to be the one to educate a bright, and moldable young mind into one that would become enlightened, and perhaps slightly corrupted. “And you listened well… Nicolas,” the human’s name rolling off his tongue sensually as his lips curled up in the hint of a smile. “There are many tales of my kind, and although they vary slightly—as you pointed out—in version, the essence of them, I have found, remains somewhat close to the truth.” But what was truth? Therein lied the trick. “My duty is to serve, but unlike some stories, I enjoy it and aim to please,” he emphasized as he enunciated certain words, his voice deep and emotive. “Clothes will not be necessary,” the djinn replied in response to the mortal’s question, “for I can alter my form to include them,” he told his master, the smoke around him shifting to cover his tall physique. When it dissipated, Ahsan was fully clothed with apparel that was clearly decades behind in fashion. It had been awhile since he’d been freed from the lamp. “Will this do?” he asked the boy, arching a dark brow in question.