Here it is, hope it's alright if I don't play anything sparkly xD.

Name:Kristene Hensworth
Age:Starts out as a toddler
Gender:Female
Species: Human but vampire at age of 28
Appearance: 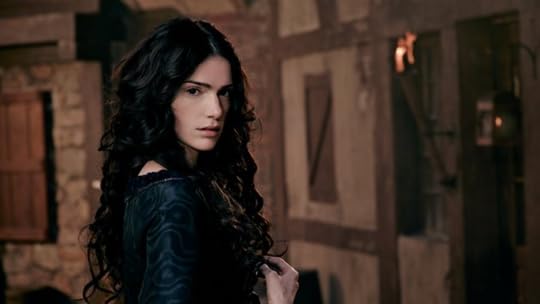 What time period are we talking about? Past, present or future?
Also, is it alright if we keep this smut free?

No Lemons! For you.

You say you're not comfortable with it I won't do it.

Thank you for that. I'm not a fan of the lemon xs.
Cursing, violence is all well and good though.

Witch trials, lovely!
Oh! Is she going to be accused of witchcraft?

The Puritans were on the ship on the way to America ready to live life on a land of freedom. When the ship found the land they anchored it and got off of it. They didn't realize that there was a toddler left on the ship. That toddler was Kristene Hensworth holding her little rag doll. Everyone was asleep when she was found by somebody who wasn't human.

While the designs of the ships have certainly improved since he was a lad, they didn't make a dent in the insufferable travel. Despite his own living quarters due to his noble standing, the quarters were cramp. The smell of sickness and rough seas left him eager to reach the Americas. Like the humans that occupied the ship's haul, he was seeking a new start and new life out of the shadow of his brother and the overbearing covenant.

Timing wasn't in his favor, when they had arrived it had been during the glare of the afternoon. Imprisoning the noble in his quarters longer than he cared to be but finally the sun fell. His cane clicked across the crowded floorboards, he rounded the crates of cargo and straightened his hat. The vampire paused briefly, his attention catching on a creature. Tiny in stature and out of place amongst the ship's inventory. He glanced to his left, to his right then approached. His long pale fingers came to rest on her shoulder, turning her to face him. " This is no place for a tiny flower, lass. Where is your mum?"

reply | flag *
message 11: by [deleted user] (new)
May 05, 2015 01:59PM
The toddler cried and cried looking up at the man. Her parents had died on the ship leaving her to be an orphaned girl. "Dead." She said whipping her tears out of her eyes. She was so scared to be alone that she was shaking in fear.

For a brief moment Enoch was convinced he had startled the pint size human. He had expected to see the adults charging to their offspring's aid until she spoke between sobs. That, he should have expected. It wasn't uncommon to see death on the seas, especially a lengthy journey like this. Damnit. He set his jaw tight, releasing her shoulder to drag his hand over his face. Realizing he should have just kept moving but now that he was involved his hands were tied.
He crouched to her level and even then he still towered over over. "Calm yourself, dear child. You mustn't let the devil's servants hear you weep and risk your sweet soul. Your tears will not help you, nor your mother or father. Be strong and dry your cheeks." His baritone voice soft but projecting authority. " Your name, lass. What is it?"

reply | flag *
message 13: by [deleted user] (new)
May 05, 2015 02:44PM
"Kristene Hensworth,"She sighed looking up at the man that was clearly a lot older than he seemed. She dried off her cheeks and smiled seeing that he was quite handsome for his age. She didn't say much of what she thought because in this time of day women and children that were girls were not allowed to speak unless spoken to. She stood there waiting patiently like she was taught by her parents. What will come of me next? She wondered to herself as she waited for him to say something.

Enoch smirked, resting his hand atop her head. " That's a good child." Behind the cover of his lips, he touched the tip of his tongue to the sharp tip of his fang. The quarters had been too closed in for him not to arouse suspicion by feeding so of course, he was parched. The small child wouldn't suffice, at most the sweet child may have twenty to thirty years and he certainly had time to spare. No associates or connections here for him to bother with so she'll do as company. With a simple shrug he rose to his feet. " Well, Miss Hensworth, let us get off this accursed ship and begin life a new." He straightened his hat once more, readied the cane that was more a sign of status than need. He extended his hand to her, " quickly now, Kristene. We haven't the time to waste." He smiled.

reply | flag *
message 15: by [deleted user] (new)
May 06, 2015 09:08AM
Kristene extended her hand into his and she walked with him keeping quiet because she knew that was what she must do. She felt happy now that she wasn't alone and her memory started to fade away bit by bit because she didn't want to remember the fact that her family was dead and gone. "What is your name?" She finally decided to ask him feeling that there was a need for her to know that way she wouldn't have to just say Sir or Mister.

How easy it was to dwarf her hand in the palm of his. He stepped out and was greeted by a beautify evening on the dock. The fog gently rolling in from the sea to give the new world an ominous front which suited him. His attention moved down to the child. "Enoch Roslin, my dear Kristene." He paused to a deck hand, lazing about on a crate with a bottle of spirits in his hand. Enoch released the child's hand and came to her eye level. " Now lass, I need you to peer that way like a good child. He guided her hands up to her ears. " Turn a deaf ear and wait for me here. Understood?" He waited for her to acknowledge his order.

reply | flag *
message 17: by [deleted user] (new)
May 07, 2015 07:40AM
Kristene listened to Enoch not knowing what was going on. She had covered her eyes and fell asleep standing there. He had told her to wait there and she did. She didn't want to anger the man because he seemed to be very short tempered to her. She just hoped that everything was going to be okay.

Her obedience was a good sign. The child was trusting and quick to listen to him. He laid his hand on her head before he slipped away. Upon advancing towards the deckhand, he was greeted with slurred insults and obvious agitation. The threat to club his head open with the bottle was ceased midsentence when Enoch ripped him from his perch. Discarding his cane as he snapped the male's flailing arm to stun him before sinking his teeth into the neck of the man. His gargled scream silenced in a matter of seconds as he was bled dry. His body tossed into the waters before Enoch dsbbed his lips with a white handkerchief and grabbed his cane. He returned to his young ward, scooping her up and holding her to his side. "Have you eaten?" He imagined if she had, it wasn't hardly considered substance for a child.

reply | flag *
message 21: by [deleted user] (new)
May 27, 2015 11:28AM
"No I haven't Enoch." Kristene answered holding onto him for dear life. She was smiling looking at him because she knew he was different from anyone else in the world. "I think you are going to be awesome." She said.

The brass tip at the bottom of his cane clicked against the ground as he walked. Of course she hadn't eaten with no parents to tend to her. Now the chore to secure a decent room at an inn and some bread and protein for the child. He inhaled slowly the air of new beginnings and gave her a side glance, a brow lifting at her. " You think so, do you?" He inquired, then smirked. "Impossibly high standards you have for me to withhold, my dear child." He said walking along the lit lanterns to a bed and breakfast. Entered, quietly commanding authority with his presence. He ordered a room and paid a hefty sum for bread and cooked goose to be delivered promptly.