Blackstar padded into the nursery for no reason. He sighed quietly as he looked around. Memories of Silvermist giving birth to Birdsong flashed back into his mind and he started purring.

Shimmerkit was beyond bored. There was nobody to play with! It was lonely not having a sibling and she wished she could get out of the nursery and become an apprentice. But she'd have to wait two stupid moons. Her eyes went wide when she saw Blackstar. Blackstar! Clan leader! Coming here! She couldn't help but let out an embarrassingly loud squeal.

Blackstar jumped in surprise at Shimmerkit's squeal, but calmed himself down when he realized it came from her. "Hallo, Shimmerkit!" He mewed happily.

"You're Blackstar!" Shimmerkit said gasping. Her eyes were filled with wonder and she stared up at him. He seemed so big compared to her tiny form.

"I sure am!" Blackstar smiled and laid down on his side. "I acted quite similar to that when I first saw the leader at your age. He seemed pretty upset than he didn't get to see me and my brother open our eyes,"

She beamed at him. "So, what are you doing here in the nursery? It's basically just me in here and I'm bored. Being a kit is boring because all I do is eat and sleep since I don't have friends," Shimmerkit explained rolling around a bit.

"Actually, I don't know why I'm in here..." BLackstar tipped his head slightly at himself. "It's not a habit...it's quite a while since Silvermist last had kits. I guess my paws just wanted me to come here for a while and rest,"

"Well, it is lonely in here," She meowed. "I can't wait to become an apprentice! I wanna be like you-not completely though since I'm my own cat but like most other kits I look up to you."

Blackstar flushed. He never knew that he was a role model to the kits. "I...I don't know what to say," He looked down at his paws with a shy smile on his face.

Shimmerkit giggled, " You really haven't noticed? You may be clan leader but I think you're silly." Shimmerkit jumped up trying to climb onto his back but she was too tiny compared to him. She pouted, sometimes she hated being so tiny.

"I had the same problem when my father challenged me to climb his back. He knew I'd never back down," Blackstar watched Shimmerkit. "Try unsheathing your claws while climbing. Just save the skin breaking for your enemies and prey!"

She unsheathed her claws and she grabbed onto his legs trying to work her way up. She could do it, she knew she could!

((This reminds me of Jayfrost and Shimmerkit in Second Beginning!))

Blackstar purred and suddenly missed Birdsong tackling his tail and sleeping by his belly. I want more kits... He had been repeating that to himself for well over a moon. He wanted to tell Silvermist, but as usual, he was too shy to speak of it to her, even though he knew she was very open with talking about it. She seemed to talk about kits so easily...but for him it was harder than picking up a boulder.

((Yes same here! Shimmer is one of my favs!)
She finally succeeded and was on his back. "I did it!" Shimmerkit cheered feeling proud of her accomplishment.

"Of course you did" Blackstar smiled. "You live in StormClan,"

Shimmerkit nodded, "StormClan is the best! We have fierce warriors and a leader who gives great badger rides!" She replied gleefully.

Blackstar purred loudly. "I bet there many cat how are better with giving badger-rides than me," He smiled.

" Yeah but you're clan leader," She pointed out. " So yours seem extra special somehow. I'll tell all the other kits about it!"

"Just because one is leader of Clan means everything they do is special. I learned that when I lost my first life last moon," Blackstar tipped is head slightly to show a long scar on the side of his throat that was still healing. "Silvermist doesn't like it when I go outside now. Blocks my way from the entrance every time I come near it," He sighed. "Sooner or later I'm going to have to go out through the dirtplace," He grumbled.

" I wanna go out too!" She whined. " I'm stuck in camp while everyone else gets to go out and explore territory!"

"That's because you're still a kit," Blackstar smiled. "How old are you again?"

((What's he look like now? You have sooooo many cats. I saw your cat journal in the second beggining. Christina Perri, nice)) 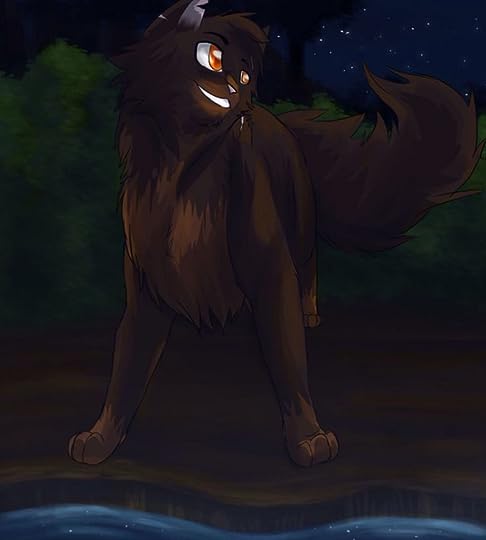 " You're old compared to me," Shimmerkit said. " How many kits do you have? Brothers? Sisters?"

"I have one kit, Birdsong...and I have two siblings. My half-brother, Jayleaf and my twin bother Snowspots," Blackstar growled at Snowspots' name and fury blazed in his eyes.

Shimmerkit squeaked when she saw the fury in his eyes. He looked really angry. She also probably shouldn't mention her own sister.

When Blackstar heard Shimmerkit's squeak, he snapped out of it and covered his face with his paws. "Snowspots used to be a StormClan cat until I became deputy. He's always hated me and I don't know why..."

" You're scary when your angry," She mumbled.

"I'm sorry..." Blackstar murmured and gently nuzzled her. "I didn't mean to... I'm still learning to calm myself down when I mention my twin,"

Shimmerkit nodded. " It's okay, I have a sister too." She frowned just talking about her.

"You have the same sibling problem as I do?" Blackstar looked at her with surprise.

" My sister is really mean and she hates me," Shimmerkit meowed. " She's always pretending to be sick to steal mommy's attention away from me."

"Snowspots always believed I was doing the same as your sister..." Blackstar sighed. "I'll tell Dad later...maybe he can help," He had completely forgotten that Lionstar, his father, was dead. Blackstar still wasn't used to his new name and Silvermist always needed to remind him that he was leader now, and that Lionstar had died from green-cough a few moons ago.

" I'm sure you're a great leader!" She meowed honestly. " I don't have a mentor yet or a dad anymore. Mommy told me daddy is with StarClan but I wish I got a chance to meet him."

"Will be a great leader," Blackstar thought he was correcting her. His heart always kept refusing to believe Lionstar was dead, which always lead Blackstar to forgetting he was leader now. "I'm still deputy,"

She frowned. " You're leader right now. Blackstar, the old leader is in StarClan with my daddy, remember?"

"Oh, StarClan..." Blackstar buried his face into his paws and tears flooded down his face, but he didn't make a sound besides his breathing. "It's been three moons...surely I would've gotten past my short deputyship by now..."

"Blackstar," Shimmerkit said slowly. " He's....dead. I don't really understand death but I know it means he isn't coming back. You're leader now! No longer a deputy. I don't even know who the deputy is but I know it isn't you."

"My deputy is Fallenwing," Blackstar replied quietly. "Everyone knew I liked Silvermist because I asked which border the Border Patrol was going. If the deputy said DarkClan, I announced that I was joining them. Everyone but Lionstar disapproved of my love for Silvermist. He had always encouraged me to find love, no matter what CLan she lived in...and she lived in DarkClan...the same Clan Jayleaf was born in. I understand why Lionstar said what he said. He had fallen in love with DarkClan's leader and had kits with her, but he had broken up with her, because he knew they couldn't be together... He never truly loved my mother..." He sighed. "I don't understand why he would let me break the Warrior Code, though..."

She wrinkled her nose. " Who's Silvermist? I don't know everyone here. Is she pretty? Don't go lovey on me and tell me how gorgeous she is-I'm sure she is though but just describe her."

"Silvermist is the pretty silver she-cat with black leopard-like spots that you see beside me for most of the day," Blackstar purred. "I rarely get any time alone, but that's perfectly fine with me," He smiled. "As long as she doesn't get on my nerves, we have a happy Blackstar,"

Shimmerkit nodded. "What's being in love like? Is it weird? Mommy says it's awful and painful and not worth it."

"Oh, she's very wrong... It's the most wonderful thing in the whole world!" Blackstar breathed. "It seemed like the whole world stopped when I first saw her. My heart pounded when I saw her and it fluttered when she touched me,"

" That sounds nice," Shimmerkit said nodding. " But what if they die? Would it be worth it?"

"Completely worth it," Blackstar smiled. "I know Silvermist's would crush me deeply...probably to the point of wanting to commit(?) suicide..." He admitted. "I'd rather burn alive nine times than not knowing her at all. That's when you know you've found true love,"

" That's deep and really sweet!" Shimmerkit meowed. "But this whole love thing makes no sense to me. I'm only a kit though. You told me you had a daughter, any grandkits?"