Mod
Kylie passed through the park, lost in her thoughts.

Mod
((It's cool, by the way is my character stuck in GX or can he comment in all of the yugiohs?))
Jordan leaned against a tree with a young girl feeding him grapes

Mod
((That's completely up to you. I'd recommend putting him in all the folders though, for a better roleplay experience. ^_^ ))

Mod
Kylie almost passed him by, but stopped mid-step when she noticed the two. She arched an eyebrow as she approached. "Um... Hey."

Mod
Jordan opened an eye and smiled, one he hasn't controlled yet, how unusual "Hello, what made you stop" He asked

Mod
"You kind of stand out... A lot." She came to a stop just before them, frowning as she looked between the two. "... What're you doing out here?"

Mod
"Can't you see? She's feeding me grapes" He said as another dropped in his mouth ((It's fine))

Mod
"Because I pay her too" He said laying back looking at her, she would be fun to control

Mod
Jordan shrugged and smiled slighty, sending her the impulse to duel, to go into a duelling fenzy

Mod
Kylie blinked, looking vaguely confused for the briefest of seconds before her gaze sharpened suddenly. "Hey, you!" She whipped at her duel disk, raising her voice before she even knew what she was doing. "Duel me!"

Mod
Jordan smiled and got out his own duel disk "Okay, let's duel!" He said standing up

Mod
Kylie drew her hand and, after a moment of shuffling through the five cards to see what she could play, summoned a facedown defense monster. "I'll also add one trap card, and then end my turn!"

Mod
She frowned slightly, regarding the queen with caution. 'Only 500 attack...' she thought to herself worriedly, chewing softly on her bottom lip. 'But he has those 2 cards facedown as well. Probably traps. What'll happen if I attack?'

The teen hesitated for a moment longer, than drew her next card and glanced over her hand. '... I'll eventually have to risk it, but for now...'

"I'll summon one more facedown monster and end my turn."

Mod
((Hey, ummm mind sending a group message?))
Jordan frowned, he wished she flipped it over but he would need to make due ((Need to work out my move so give me a couple mins))

Mod
Jordan smiled "I special summon Allure Knight! Then I play scar scab warrior and end my turn" He said ((The allure knight is a fan card, here it is http://s1296.photobucket.com/user/Bil...))

Mod
Kylie looked worried for a moment when she saw a card she didn't recognize, but then relaxed when she saw it's power level. 'That obviously doesn't give me much of an advantage... but at least it's not a disadvantage either.'

"I'll flip up one of my monster cards and end my turn," she decided, glancing uneasily at her facedown trap card.

((What are Scab Warrior's stats again?))

Mod
((It's a 0/0, however whenever it gets attacked it take over the card that attacked it, in case you were wondering my deck uses allure queens and scabs, both and some fan cards))
Jordan smiled, this was good

Mod
The monster card she had chosen revealed itself to be Flamvell Firedog - exactly even to his Allure Knight.


Kylie glanced uncertainly at Jordan; his smile threw her a bit off. Did he know she was stuck? Yes, that had to be it. God dammit, none of this was going as she had planned!

Mod
Jordan smiled "I first activate my trap card, mischief of the Yokai, all monsters levels are decreased by 2" He said with a smile ((I do it like this so you can interrupt with a trap if need be))

Mod
She flinched as her monster's level dropped, but knew that she didn't have any cards to stop it. "Alright... I-I guess I'll end my turn then..."

'He'll attack. He's definitely going to attack.' She braced herself for his next move.

Mod
The move startled her, having not been exactly what she was expecting. 'What's he planning...?'

Mod
Jordan looked at the card that was still face down and smiled "I summon allure apprentice ((http://s1296.photobucket.com/user/Bil...)) and attack with allure knight" He said with a smile

Mod
Ah, there was the attack she had been expecting! Kylie threw up her arms to brace herself from the attack.

((Can you double-check to make sure I did my math right? I think the attack should be over 3000, right?))

Mod
((Yeah, we were playing with 4000 life points and no it is 2900 damage in total))
Jordan looked at her with a smile seeing if she activated a trap 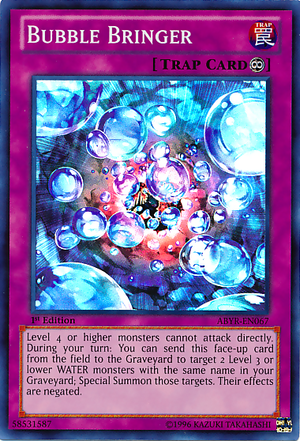 Mod
((So how would you like me to win? And just a thing at first she wouldn't feel that different however that will change as Jordan gives her commands))

((Wait, what level is Allure Queen? Bubble Bringer is a continuous trap card, so no monsters can attack if they're level 4 or higher.))

Mod
Deaths coming wrote: "((So how would you like me to win? And just a thing at first she wouldn't feel that different however that will change as Jordan gives her commands))"

((I don't really think there's any particular way I'd like him to win... Unless you want him to end the duel early? Cuz my character's losing either way, so he could always win the regular way, by bringing her down to 0 lifepoints.))

Mod
((Allure queen is level 3, and I would like to end it quickly and just a question do you have any particular limit when it comes to thing you rp?))

"Oh shoot!" Kylie didn't even have time to brace herself this time, as her lifepoints shot down.

'I need to get a monster on the field,' she thought wildly to herself, starting to sweat a little. 'A few more moves like that... and I'm done for!'

Mod
((Just a note, I do hope you don't mind your character being controlled and such, the things I like to do when this happens, if you want, I can give her some freedom but yeah she will be controlled unless you say otherwise, with your character I was thinking that maybe because he liked her for some reason he would make her more of a daughter sort of character, though before that the most extreme stuff would be(That we rp, I might if it is not to hard on you mention sexual stuff but fade to black or skip) "You are not allowed to wear clothes or go to the toilet, when you do you are to punish your self by locking your self in your room for a hour" note, that if you allow I might add some self harm stuff, however again only if you allow and are willing))
Jordan smiled "I end my turn" He said

Mod
((The biggest thing about stuff like that is that it's not allowed in a public roleplay. Anything sexual has to be in a 1x1 roleplay, or it has to be skipped over.))

((We can always keep his commands and such in a 1x1 roleplay if you want, and skip to after the fact in the main roleplay.))

Mod
((As long as sex is actually not rollplayed it is fine I think, and I don't like to rp the actually act of it))

Mod
((That's fine by me. Do you just want to do a time skip when we get to that point in the roleplay then?))

Mod
((Yeah, if that does happen, do you have anything you don't like to rp?))

Mod
((Just flat-out sexual stuff. I'm fine with basically anything else. What about you?))

Mod
((Same, I don't mind it mentioned or done, however skips are needed, you don't mind her being naked or anything like that?))

Mod
((Since there's no pictures or anything, then that's fine.))

Mod
((Okay, umm your turn to comment, and just saying do you want to hear the plan with your character?))

Mod
((Yeah, if you want to message me about it. Or just post it here, whatever works best for you!))

((I'll post my characters response in just a bit. I'm in class right now, and I still need to finish planning out my move. Sorry, I've been pretty busy with homework.))