You either love him or hate him, but no one can dispute his influence on modern horror. He is my favorite and my favorite piece of fiction is At the Mountains of Madness.

I've read almost every one of his works, so I'd love to have some discussions on his work. This thread is open for that. Completely open minded! Lovers and haters alike invited.

He's a big influence on my writing.

While there is no doubt about his influence and talent in the genre , the rampant racism in his work is hard to accept.

To me, H.P. Lovecraft connects with me on 2 levels. Subject matter and literary quality. I could probably read anything from Lovecraft, considering how beautiful his words are. But back to his work, it is by far the most out-there, and intricate works on para-psychology paranormal literature ever. My favorite story is "Shadow Over Innsmouth"

Lovecraft's work is fun to read, and I love the way he has inspired so many others. I am currently reading "Black Wings of Cthulhu," an anthology edited by S.T. Joshi now, and have a bunch more such books on my shelves. To have created a horror mythology that can lend itself to stories from so many authors in so many settings and styles -- that is a remarkable contribution to fantastic literature. Mind boggling.

Mod
I think HPL's racism has been blown all out of proportion on multiple levels by the politically correct.

First off, I don't think much of people who judge a dead man who can't respond in his own defense.

Secondly, he is the child of two paranoid schizophrenics who wound up in an asylum and raised by spinster aunts. His mother was deathly afraid of "shadow people" who wanted to kidnap him.

Frankly, I think it all is a case of "the pot calling the kettle black". Some of the most vocal individuals calling HPL a racist are generally no better and frequently far worse than they accuse HPL of being.

I love the old man's work. It had a huge impact on me when I discovered it, especially having grown up a big fan of Poe.

I'm a big fan. Between several books and sites with his stories I've read about everything he's written. The whole Cthulhu mythos is amazing.

Mod
I'm not only a big fan of his fiction, I also found that his Supernatural Horror in Literature is an excellent guide for anyone interested in exploring the history of horror.

Loving hearing from all of you. No one I know in "real life" appreciates him or in a lot of cases, have never even heard of him.

I agree with you Jon on the racism issue. I've never found it so rampant. It certainly doesn't detract from his writing in any way.

I love Lovecraft's stuff. Most people I know have never heard of him either.

There is a 2 volume set called "I am Providence" that covers his life. It's pretty interesting.

I will check that out Reese, thanks.

I was a member of another horror group where all the members were expected to despise Lovecraft and deplore his racist work.

I am thankful for the normal, tolerant, appreciators of literature in this group. It is reassuring to know that there are still people confidant enough in their own decency that they don't have to devote their entire commentary to proving how politically correct they are.

Reese wrote: "I love Lovecraft's stuff. Most people I know have never heard of him either."

No one in my family knew who he was until I told them.

My first Lovecraft was At the Mountains of Madness which is one of his later ones but if you have some familiarity with the mythos it makes sense.

Joseph wrote: "Liz wrote: "Do you have any recommendations for someone who (a) knows who he is, but (b) has never read anything by him before? I mean, I know you have been listing off titles that you like, but di..."

My first book was a short story collection by him. My first story was either Pickman's Model, or Dagon. I liked both.

I would say The Shadow Over Innsmouth would be best, but also what Adrian said, Pickman's Model or Dagon may be good places to start. The other's are a bit heavier in the mythos, and I wouldn't be sure where to start with those.

A good story to begin Lovecraft's Mythos is either "The Festival" or "The Nameless City". Then work your way up to "Dagon" and "Call of Cthulhu". From there, just dive in.
If you want non-Mythos tales, start with "Pickman's Model" or "The Picture in the House". After a few like that, read "Herbert West, Re-Animator".

"Herbert West, Re-Animator" was so damn fun. I've heard Lovecraft didn't like it very much and that it was a paycheck story, but I laughed outright at it.

"Herbert West, Re-Animator" is a lot of fun, definitely not a " deep-thinker" compared much of H.P.'s work. I'm sure he liked it himself on some level, though; after all, he did write it.

Maybe it was just having to cchop it up into episodes that he disliked. I'd have to look that up again. But yeah, it's totally silly and dark and fun.

Holly wrote: "I was a member of another horror group where all the members were expected to despise Lovecraft and deplore his racist work.

Ditto. I bailed when I realized you could easily imagine the froth at the edge of the mouth.

Which doesn't mean Lovecraft wasn't racist. He was, as were many of his time, place and socio-economic position (and as are many now). And being an honest, truthful author and being committed to writing weird fiction (which meant exploring fears especially and including his own) he put what came out of the process on paper.

H.P. Lovecraft: Against the World, Against Life by Michel Houellebecq is still me preferred text on the topic.

I'll second Quentin's vote for "The Shadow over Innsmouth." It's actually the basis for the movie Dagon (even though there's a very short story by that title). Plenty of creepy action and a great place to begin. 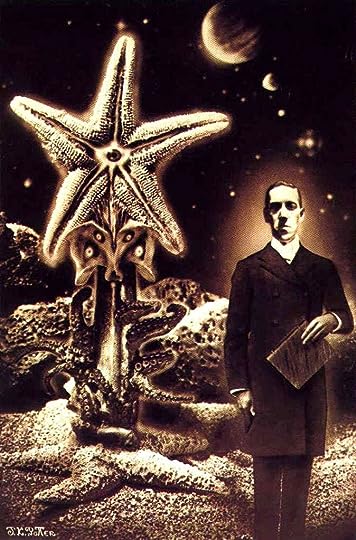 Hmmm. I wouldn't have guessed that, Brett. hahaha :)

I honestly think that The Call Of Cthulhu is the best story to start with (it's not what I started with, but hey). It's suffused with an atmosphere of alienation and unworldly menace, has a succession of interesting settings, an unusual amount of action, an interesting structure, and is just generally a great, great read.

My first story was Dagon. Perfect length, really, for a taste.

My fav is of course shadow over innsmouth but the last one I read was the thing on the door step, his stories inspire me to try and understand the meaning of true fear and capture it on paper

I love his stories, he is one of my favorite authors. I am in agreement with others here on this thread, in the fact that no one in my everyday life has either heard of him, or is interested in reading his work.

I just started reading I Am Providence (Thanks Reese!). I'm only about 50 pages in, but have learned so much about him already.

Brett wrote: "My first story was Dagon. Perfect length, really, for a taste."

Mine, too. Was Omnibus 1 out-of-stock when you went book shopping as well? Dagon and Other Macabre Tales :-)

Mod
I agree with all the above recommendations and I'd like to include a couple more that have stayed with me, The Colour Out Of Space and The Dunwich Horror.

The thing on the doorstep

I enjoyed the Dunwich Horror; although the movie from the 70;s was fairly horrible. I've yet to see something from Lovecraft that has translated well to the screen however.

Reese wrote: "I enjoyed the Dunwich Horror; although the movie from the 70;s was fairly horrible. I've yet to see something from Lovecraft that has translated well to the screen however."

I agree, though I do like Roger Corman's The Haunted Palace. It pretends to be an E A Poe movie but really is based on a Lovecraft story.

Not even Reanimator? I thought that was awesome

I think Re-Animator might be the exception actually. I keep hearing that Guillermo Del Toro wants to do At the mountains of madness. I think he would be among the only directors to be able to really pull off a Lovecraft story. The creatures from Hell Boy and the plot and creatures out of Pacific Rim just scream Lovecraft.