Mod
Here we will discuss Diary of a Country Prosecutor published in 1937 by Tawfiq Al-Hakim .Tawfiq al-Hakim is one of the most important figures of twentieth century Arab literature , Al-Hakim is remembered primarily for his plays—he wrote around seventy full length plays ,but he also wrote philosophical and theological treatises, political essays, biographies, and novels .

Diary of a Country Prosecutor - also a translation was entitled as Maze of Justice - reflects a personal experience of the author as it is Partly autobiographical , al-Hakim was Sent to Paris in 1925 to complete a doctorate in law, he chose instead to steep himself in Western culture, imbibing the sense of the role and power of the dramatic medium in its Western form and determined to replicate it in the context of his own society. He returned to Cairo in 1928 without a law degree, but filled with ideas for literary projects, some of them already in draft form.

" A young public prosecutor posted to a village in rural Egypt. Imbued with the ideals of a European education, he encounters a world of poverty and backwardness where an imported legal system is both alien and incomprehensible. "

THE ACHIEVEMENTS OF TAWFIQ AL-HAKIM
http://acc.teachmideast.org/texts.php...

The novel was made into a film in a drastically different Egypt more than thirty years later...in 1968 . 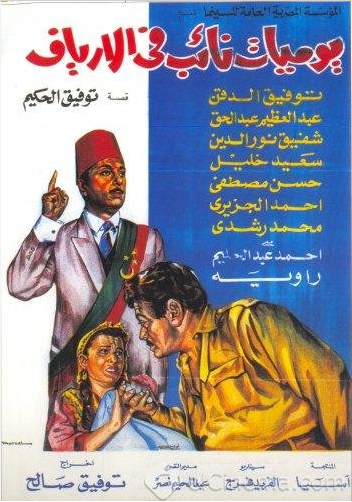 * I hope you will enjoy reading this novel with me , I read it about twenty years ago so rereading it will be like reading a new novel ! :)
Who will join ?

Mod
Anybody reading or will be reading this book ?

Mod
So did anyone start reading ? ...I finished reading ...
Even though this novel was written eighty years ago and it is supposed to portray different Egypt ; I can't help think ...is it really different now ?to which extent ? was it even that different when the movie was it made ?

I loved al-Hakim language and sarcasm ....
We have so many characters repressing the authority ; the two judges ....the mayors ...al -maamour ( the Sheriff) ...etc , the law and its absurdity and people's lives ...politics ...corruption . It was so easy to follow .

Two characters just pop out of the novel and you can not forget about Reem and Asfour .

Waiting for your thoughts ..

I am still waiting for my library copy to arrive! I don't know what is happening. When I ordered it, there was not even a cue, but it's been two weeks now. I hope this does not mean that the book has been lost. I've been looking forward to read it!

It's very interesting reading something written in this time period. I'm having a hard time with this just because I find it so sad. I mean the lives of the Fellahin. They have so little and still have to pay fines imposed on them by this ridiculous Napoleonic code.

Nile daughter wrote: "So did anyone start reading ? ...I finished reading ...
Even though this novel was written eighty years ago and it is supposed to portray different Egypt ; I can't help think ...is it really differ..."

I agree it's very easy to follow. It was also a very fast read.
I was amazed though at how it's definitely relevent today.
I am curious if the autor Tawfiq Al Hakim had any problems when this book was published. He wrote it before the revolution and he is so critical about the authorities.

Jalilah wrote: "I am curious if the autor Tawfiq Al Hakim had any problems when this book was published. He wrote it before the revolution and he is so critical about the authorities"

That is an interesting question , I will try to find an answer .

What do you think of Reem and Asfour ?

Mod
I found this link interesting about Tawfiq Al-Hakim: A Reader's Guide :

This is a part about women in al Hakim writting :

" Hutchins devotes the final two chapters to Al-Hakim's view of women and the religious dimension in his works. Most critics are of the opinion that Al-Hakim was a self-confessed misogynist. Hutchins, who initially regarded him as "a liberal male chauvinist" (195), now sees him as an "Islamic feminist" (195). One may or may not agree with Hutchins on this point. However, one cannot help but be converted to Hutchins's view that there is "an amazing continuity of purpose and of theme throughout Al-Hakim's works" (89)"
https://books.google.com.eg/books?id=...

Mod
I just finished reading Diary of a Country Prosecutor, and I also watched it - يوميات نائب في الأرياف on YouTube. The film is a classic black-and-white movie, and shows emotion well. Reem and Asfour are both mysterious characters. Reem is beautiful, and rather wild / uncivilized. She seems to represent the potential appeal of peasant life. Asfour was more pathetic in the film than in the way that I had imagined him. He seems to represent a sort of popular wisdom, but it is weak and meaningless in the face of legal challenges. The author is definitely the only character I could really relate to. But that is part of the way that the humor works, by distancing all the characters in the drama.

The translation that I read (Maze of Justice, trans. Abba Eban, foreword by P.H. Newby) showed the dark humor of a justice system that has nothing to do with justice, and everything to do with personal profit and maintaining an appearance of functional bureaucracy. The satire and absurdity of it all came through much more in writing than in the film. There were sections that were quite funny, although the overall story is horrifying.

The foreword was useful, explaining that this crime story is not a whodunnit conventional mystery, and that Tawfiq al-Hakim worked as a prosecutor / نائب in the Nile Delta region for some time. He put his experience to good use for this biting retelling of the farce of a justice system that benefits almost no one.

Mod
Thanks for sharing Melanie :)

Melanie wrote: " Reem is beautiful, and rather wild / uncivilized. She seems to represent the potential appeal of peasant life.. ..."

That was interesting , I keep thinking about her and Asfour a lot .