Children of the Exalted Secret (A Fantasy Roleplay) discussion 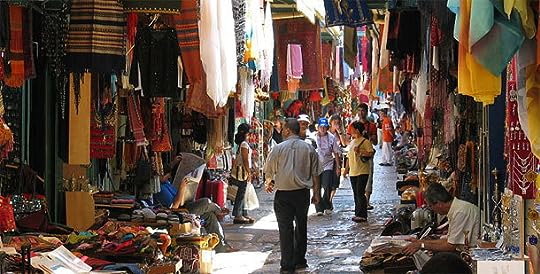 A crowded market where people can buy and sell wares.

Severin walked through the market, looking around as he thought about what to make for dinner. Yun...well, he didn't want to think about that right now. So he continued walking, his eyes scanning the different foods in the market.

It had been months since Embryl had began his mission, and he was nearly finished with it in Delen. Few people tried to sell slaves anymore, with the knowledge that they would be freed by the masked man and disappear. There was only one man who stood in the way of Delen being slave free. A man by the name of Japhet Riggs ran the last slave market. And it was these slaves that Embryl would try to free. It ran all the time, but no one would expect him to strike midday. He pulled on his mask, preparing to strike, staff in hand as he ran quickly through the market.

Severin watched as a man wearing a mask ran passed him. That person...they had the same build as Embryl, and the same staff. He quicklh ran after them, not realizing what he was getting into. "Hey! Wait!" He yelled.

Mod
Embryl burst through the crowd, staff in front of him, already casting as he went. "Riggs! Your time has come. Time to pay for the freedom of the elves!" A rift opened up, and there it came, huge and lumbering, a spirit of Terror. Immediately there were screams, from the fade or from the real world Embryl couldn't be sure. The elves knew what to do. Ther began to run, still in chains, from their places in line, scattering in different directions just like they had planned, to meet up at a rendezvous point outside of the city, a small hovel near the woods that Embryl had claimed. A rift through the fade would be opened once Embryl met theme there, and they would travel through to another open rift point in Myrium. Embryl concentrated on keeping the spirit at bay, only destroying what was harmful to the elves. He stood imperious, strong in the face of chaos, a hope for those he wished to free, while on the inside he too was frightened of what might happen.

"Embryl!" Severin yelled, watching with wide eyes before he ran faster towards him. He stood in front of him, breathing heavily. "Embryl..." He had tears in his eyes as he looked at the elf. He had been so depressed, with Yun having lung problems, he was usually bedridden. He couldn't help but feel alone.

Embryl's eyes were wide behind the mask, all thought stopping momentarily. "S-Sev?" He felt his grip on the spirit slip for a moment and he startled, body jerking back into the rigidity of control. "What are you... Get out of here! It isn't safe!" He needed to get Severin away from the destruction before he was collateral damage. Months had gone by, but he was still firm in his decision to leave Sev behind and out of trouble. "This isn't your fight! It isn't safe! Go home!"

"I don't care! Your fight is my fight! Because like I said once, I'll go anywhere you go!" His eyes then widened, "But Yun...Yun is still sick...I can't...I can't leave him behind..." He felt the tears flow, and he gently reached out to touch Embryl, but stopped when he was merely inches away.

Mod
"Y-Yun is..." The spirit roared and screamed and Embryl's body lurched as he tried his hardest not to lose control. He grabbed hold of Severin's hand. "You do what you need to do. I have a place by the woods if you want to find me. The spirits will guide you. But for now, get out of here. I told you that you would see me again. I wasn't wrong then and I won't be wrong when I tell you again now that you will see me again." He shoved the mask up one handed and pulled Severin in for a quick peck before lowering it. The spirit tore Riggs's head clean off, and lumbered back into the rift. "Go back!" Embryl shouted to Severin before diving into the tear in reality, which closed up behind him.

((Going to an audition thing. Be back in about 3 hours))

Severin watched as Embryl disappeared through the rift, then quickly ran. He didn't know why, but he just ran to the forest. He wanted, no, needed to see Embryl. So he ran, and once he got to the forest, listened to the voices of the spirits that Embryl said would guide him. "Embryl! EMBRYL!" he yelled.

Children of the Exalted Secret (A Fantasy...