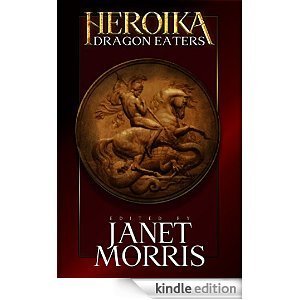 The art of dragon killing: Dragons have been eating humans for centuries. Now heroes throughout history stalk their legendary foe. Learn how to hunt, kill, and eat the wild dragon. Never before has revenge tasted so good. A literary feast for the bloody-minded.

In Janet Morris' anthology on the art of dragon killing, seventeen writers bring you so close to dragons you can smell their fetid breath. Tales for the bold among you.

About the editor: Best selling author Janet E. Morris began writing in 1976 and has since published more than 30 novels, many co-authored with her husband Chris Morris or others. She has contributed short fiction to the shared universe fantasy series Thieves World, in which she created the Sacred Band of Stepsons, a mythical unit of ancient fighters modeled on the Sacred Band of Thebes. She created, orchestrated, and edited the Bangsian fantasy series Heroes in Hell, writing stories for the series as well as co-writing the related novel, The Little Helliad, with Chris Morris.

Story Summaries: Heroes throughout history stalk their legendary foe: the Father of Alchemy entombs his own magic; dragons must not kill dragons; even a patron saint struggles when confronted by the mighty Wyght Worm; Hunting dragons, getting there is half the battle; mankind’s fate lies in a man, a child, and a dragon; holy warriors write their legend in the blood of dragons; the love of the innocent meets a dragon’s heart; one dragon hunter finds out the truth about feeding on dragon’s blood; one woman and two wolverines seek a dragon’s egg; cross the water and stop a new plague of dragons before it’s too late; bounty hunters pit their dirigible against a dragon and a flying castle; seven enemies unite to kill an ancient legend; In the bayou stews more than storm and alligators; remnants of the human race face their ultimate challenge in the bleak Arctic; when dinosaurs return, a squad of Rangers goes from dragon hunters to hunted.

Mod
All, this anthology is now available in paperback and electronically from online retailers around the globe.

It features 17 authors, most of which are long time members of this group. I am proud to me among this experienced cadre.

Interested in review copies? Please PM me and I'll work with Perseid Press to set you up.

If you are a Netgalley member, you can request a copy there.

"I’m happy to report that with all that buildup, it’s a terrific bunch of stories...

The stories, and there are seventeen of them, are presented chronologically — well, the ones set in the real world anyway. Those set in more fantastical settings are fit in among the medieval ones. In the earliest tales dragons stand toe-to-toe with the gods. Slowly, they lose that stature and become mere monsters. Deadly, true, but no longer forces of raw, elemental chaos. Eventually they’re regarded only as mythical. In the future, scientific explanations have to be found for their existence.

I’m excited to see so many stories, so many of them quite good, together in on place. I’m a fan of anthologies and there aren’t enough of them for my tastes. We’ve all read that fantasy readers only want long novels and that not enough people buy anthologies. Janet Morris has done a great job and is to be commended for taking a chance and getting this out before the public.

Perhaps the best thing about Heroika is that number 1 in the full title. Right now Morris is hard at work preparing the next volume, to be subtitled Shieldless. If you’re like me, that sounds pretty awesome."


“It simply isn’t an adventure worth telling if there aren’t any dragons.” – J.R.R. Tolkien

Brave reviewers being sought to hunt 17 dragons across as many centuries! Enter to win a paperback of Dragon Eaters, and learn the art of dragon killing. Dragons have been eating humans for centuries. Now you can join the heroes throughout history stalking their legendary foe. A literary feast for the bloody-minded.