This topic is about My Marriage
40 views
Book Discussions (general) > My Marriage, by Jakob Wassermann 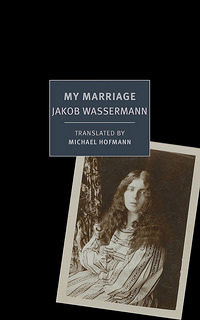 Publication Date: January 26, 2016
Pages: 288
Translated from the German and with an introduction by Michael Hofmann.
Originally published posthumously in 1934.

Alexander Herzog, a young writer, goes to Vienna to escape hi debts and a failed love affair. There he is pursued by book-loving Ganna: giddy, girlish, clumsy, eccentric, and wild. Dazzled and unnerved by her devotion to him, and attracted to the large dowry offered by her wealthy father, he thinks he can mold Ganna into what he wants. But no one can control her troubling passion. As their marriage starts to self-destruct, Herzog will discover that he can never escape her.

Posthumously published in 1934 and based on Jakob Wassermann's own ruinous marriage, My Marriage is a tragic masterpiece that unfolds in shocking detail. This story of rare intensity and drama is now brought to English readers in a powerful translation by Michael Hofmann.

Mod
This is out now, and I hope people take a look at it. I wasn't expecting much, but I think it will safely make my top ten at the end of 2016. I posted my review here, for any interested.

Trevor wrote: "This is out now, and I hope people take a look at it. I wasn't expecting much, but I think it will safely make my top ten at the end of 2016. I posted my review here, for any interested."

On to my TBR, Trevor!

Mod
Good to hear! I hope you'll let me know when you read it what your thoughts are!

Along with Trevor's review I've recently read Guy's and Melissa's. It sounds compelling.