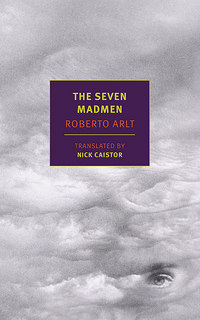 A weird wonder of Argentine and modern literature and a crucial work for Julio Cortázar, The Seven Madmen begins when its hapless and hopeless hero, Erdosain, is dismissed from his job as a bill collector for embezzlement. Then his wife leaves him and things only go downhill after that. Erdosain wanders the crowded, confusing streets of Buenos Aires, thronging with immigrants almost as displaced and alienated as he is, and finds himself among a group of conspirators who are in thrall to a man known simply as the Astrologer. The Astrologer has the cure for everything that ails civilization. Unemployment will be cured by mass enslavement. (Mountains will be hollowed out and turned into factories.) Mass enslavement will be funded by industrial-scale prostitution. That scheme will be kicked off with murder. “D’you know you look like Lenin?” Erdosain asks the Astrologer. Meanwhile Erdosain struggles to determine the physical location and dimensions of the soul, this thing that is causing him so much pain.

Brutal, uncouth, caustic, and brilliantly colored, The Seven Madmen takes its bearings from Dostoyevsky while looking forward to Thomas Pynchon and Marvel Comics.

Mod
Moved from December 8 to December 22.

Mod
In my holiday daze I failed to note that this book is out now!