Mod
Black Wings Has My Angel 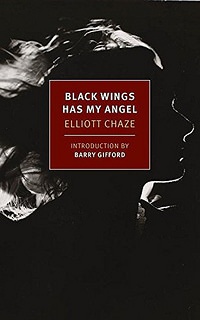 Gold Medal books weren't books that won literary awards, or any kind of awards at all. But during the 1950s Gold Medal put out some of the best writers America had to offer, writers like Jim Thompson, Chester Himes, and David Goodis, who not only peered into the bleakest reaches of the psyche, but did it with blood-tinged glee. And while many of the Gold Medal pulps have since become acknowledged classics, one of its finest, Elliott Chaze's Black Wings Has My Angel, has remained in the shadows, passed along from reader to reader despite being championed by the likes of Ed Gorman and Bill Pronzini. Yet from the very first pages it's clear that Black Wings Has My Angel ranks with the best of the era. When Tim Sundblade escapes from prison, his sole possession is an infallible plan for the ultimate heist. Only trouble is its a two-person job. So when he meets Virginia, a curiously well-spoken "ten-dollar tramp," and discovers that the only thing that she has a passion for is "drifts of money, lumps of it," he knows he's found his partner as well as his match. There's no telling whether this lavender-eyed angel will be Sunblade's making or his damnation.

To read Chaze's novel is to be taken on a roadtrip filled with hairpin turns and wild reversals, to careen through the darkest landscapes of desperate passion. It is a trip never to be forgotten.

This is one of my all-time favourite noir novels. Dark and bleak this is a relentless trip towards fate. Fantastic to see that NYRB is republishing this.

I've put this one on pre order - so looking forward to it.

Mod
This is out now, and I thought it compelling and pitch black. Even has a moment with characters looking into a seemingly bottomless void, which, despite maybe being a bit on the nose, works wonderfully.

This one looks intriguing. I'm planning to read it some time in the next few months.

The introduction to this book has been published on the Literary Hub site:
http://lithub.com/one-of-the-great-un...

Just finished this and felt there was a lot more to the novel then first appears. 5 star read due to the depiction of Tim and Virginia.

Thoroughly enjoyed it, exceeded my expectations.