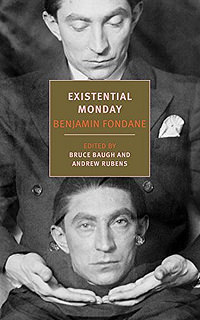 Publication Date: May 17, 2016
Pages: 176
Edited, introduced, and translated from the French by Bruce Baugh and Andrew Rubens.

Benjamin Fondane—who was born and educated in Romania, moved as an adult to Paris, lived for a time in Buenos Aires, where he was close to Victoria Ocampo, Jorge Luis Borges’s friend and publisher, and died in Auschwitz—was an artist and thinker who found in every limit, in every border, “a torture and a spur.” Poet, critic, man of the theater, movie director, Fondane was the most daring of the existentialists, a metaphysical anarchist, affirming individual against those great abstractions that limit human freedom—the State, History, the Law, the Idea.

Existential Monday is the first selection of his philosophical work to appear in English. Here Fondane, until now little-known except to specialists, emerges as one of the great French philosophers of the twentieth century.

And any word as to when we can expect the movie? I watched a little bit of "Noah" on Netflix tonight and I'm betting Russell Crowe is available for the rest of his career.

Mod
This is out!