This sketch first appeard in March 1835, in the Evening Chronicle and it deals with how people used to spend their scarce hours of leisure.

One of the topics broached is gardening, and the narrator juxtaposes a middle-class garden owner with a garden owner of less genteel pretensions. One passage of the description of the more modestly-to-do family made me shudder:

"On a summer’s evening, when the large watering-pot has been filled and emptied some fourteen times, and the old couple have quite exhausted themselves by trotting about, you will see them sitting happily together in the little summerhouse, enjoying the calm and peace of the twilight, and watching the shadows as they fall upon the garden, and gradually growing thicker and more sombre, obscure the tints of their gayest flowers—no bad emblem of the years that have silently rolled over their heads, deadening in their course the brightest hues of early hopes and feelings which have long since faded away. These are their only recreations, and they require no more. They have within themselves, the materials of comfort and content; and the only anxiety of each, is to die before the other."

This is indeed both a happy and poignant passage. In the end the elderly couple are the fortunate ones. They have invested in their garden and can reap the benefits. Even the large gooseberry has pride of place. As for the wealthy man his life is empty in comparison. 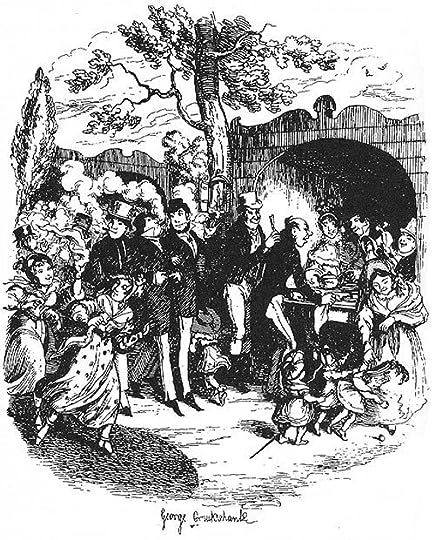 Tristram wrote: "One passage of the description of the more modestly-to-do family made me shudder:..."

I found this passage profoundly bittersweet, in the context of the elderly couple having lost their son. It gave me the impression that they had poured all their nurturing into the garden, as a substitute. But his loss is echoed in the epitaph-like seed-markers, and in their brightest flowers obscured by the deepening shadows, like their early hopes. It's as if they have chosen happiness, to comfort one another, and their anxiety of dying before the other is made worse by knowing the survivor will be truly alone.

In a very different way, the next paragraph made me shudder: "The course female education has taken of late... has tended to unfit women for that quiet domestic life, in which they show far more beautifully than the most crowded assembly..." I know Dickens was a product of his times, but this makes me feel very sorry for his wife.

A lovely description of the loss of their son, Vanessa!

wait till we come to Bleak House and the caricature of Mrs. Jellyby, and you will have some more evidence on how traditional Dickens's views on the role of women in society were. I think that Dickens was quite reactionary in that respect even with regard to his day and age, and that's why his female heroines are so terrible to stomach and so liveless. At the moment I am reading Bulwer-Lytton's Ernest Maltravers and I am impressed with the different female characters he put on the stage of that novel. They are much more life-like than Dickens's sterile heroines.

Thanks, Hilary. It's remarkable he could convey so much in only 2 paragraphs!

Tristram, Bleak House is the one Dickens novel I've already read (and reviewed), and while I found Mrs. Jellyby off-putting, it was Ada who I couldn't stomach -- she was so sickly sweet. I haven't read anything by Bulwer-Lytton, yet. Good to know his female characters fare better than a dark and stormy night! I'm assuming Dickens admired him, to name his son after him? In an odd aside, I just learned that a town in my home province of British Columbia was named for Lytton (at least according to Wikipedia). How about that.

That is one thing about Dickens. All his heros/heroines are paradigms. They are perfect. (At least to his idea of perfection.) It's been awhile since I read Bleak House, but from what I remember, while Ada was "sickly sweet," Esther was almost nauseatingly longsuffering. But this is Dickens. He exaggerates characters. If he wishes to make a person good, they are perfect. If he wishes to make a person bad, they are demons straight from Hades.

Therefore, the protagonists are always, or nearly always, unrealistically good, or bad, or sentimental, or devoid of conscience, or any other characteristic you could name. But that's part of what makes him so good...

With Esther I got a sense of character development throughout the novel, and a reason (her early years) for her beliefs. Yes, perfection is subjective, and in a way, I think Ada's continual goodness, or sweetness, is her flaw. I find the exaggerated/one-dimensional traits work better for the more peripheral characters. From what I understand so far, Dickens had a tendency to reduce his female characters especially.

however much I enjoy browsing through the suggestions for the Bulwer-Lytton Contest, I still think it a shame that B.-L. is practically merely remembered for his dark and stormy night because even though he may be lofty in style sometimes, he was great as a novelist. At the moment, I'm discovering B.-L. and I'm absolutely fascinated with him. Reducing him to that first sentence of Paul Clifford does not do him justice although it was that very first sentence that made me pick up the novel in the first place since I felt a bit of schadenfreude and wanted to read something really bad. Imagine my surprise at finding Paul Clifford a very entertaining book with interesting characters and a very readable style. Of course, B.-L. also has his female paragons of virtue, but unlike the Dickens heroines, one would really feel interested in meeting them since they are not reducible to one major virtue but still have their rough edges.

Bleak House is one of my all-time favourites, but like Kevin I couldn't bear that goody-two-shoes Esther and as she is the first-person-narrator of part of the story I entertained myself by imagining her a sly, soft-spoken hypocrite - an interpretation which violates the text but still gave me some relief.

I really hadn't thought about it much before, but now that the idea is brought up, I cannot readily recall many true Dickensian heroines. Most of the protagonists are men. Bleak House is an exception, as is Little Dorrit. The latter was somewhat better than the former in terms of the character of the heroine. And when I think of the perfection and absolute gallantry and perfect good taste of most of his heros as well, I must conclude that while women may be treated a little more cavalierly, it isn't much, and isn't intentional, but rather the age old story of men not understanding women in the least, and therefore trying to fit them in a box in which they do not in the least find to their taste.

Some authors are highly skilled in the shaping of characters of the opposite gender. I am inclined to think, with all his advantages, Dickens is not of the number, at least concerning principle protagonists. Peripheral feminine (not to enter into another discussion, but I almost said "female," and remembered that some might take exception...) therefore I say, peripheral feminine characters are mostly alright, seeing their characters and inmost thoughts aren't extensively dealt with.

Does my theory have any semblance of logic?

I see your point and would even add another unbearably sweet female protagonist to the list, namely Little Nell. And I don't know about periphal female characters being more life-like at all because very often the side-characters are types. I'm thinking of Mrs. Micawber, who can be reduced to a "I won't desert Mr. Micawber", or of Mrs. Jellyby, who is a caricature of more independent women. On the other hand, there is Mrs. Nickleby, who, modelled on Dickens's mother, seems to offer more depth (for all her shallowness). It's probably not so much a matter of yes or no but of more or less to decide whether the minor characters are more ambivalent.

As to the female major characters, I would say that Dickens hardly ever described realistic characters - like Trollope did, whom I would rank among those male writers that succeeded in creating life-like characters of the opposite sex - but that, instead, he always created the ideal female character. "Ideal" in the sense of meeting Victorian demands on female role models. Plus I might venture to say that Dickens himself had a soft spot for insipid, shy and meek women, and this is probably why he was more ready to adapt his female major characters to the Victorian ideal than, let's say, Trollope or Thackeray were.

Thanks for the recommendation, Tristram. It certainly doesn't seem fair for Bulwer-Lytton to be reduced to one phrase, when he has an impressive list of work, which he somehow managed to write while also having a political career. I had forgotten he was Secretary of State for the Colonies, which is an interest of mine. How could "the pen is mightier than the sword" be lost in wet weather? I will add him to my list, which unfortunately grows faster than I can read.

I don't think re-imaging Esther necessarily violates the text; she is very quick, and sees through Skimpole, etc, despite wanting to believe the best of everyone. And she takes action, within her limited means. I look forward to attempting to defend her when we reach Bleak House!

Kevin, although I've only read one Dickens novel and some shorter work, I'm not so sure that his treatment of women was unintentional. The Ada-type of virtuous woman may have been based on Dickens' wife's sister (the one who died young while living with them -- too young to reveal any flaws). My father was an enthusiast, and I recall, on the other end of the spectrum, discussing a secondary female character who Dickens ridiculed (it may have been in Little Dorrit). She was apparently based on an old flame, who had not aged well, with reduced hopes for her future. In this case, the caricature just seems cruel.

But you bring up the bad characters. Dickens wasn't overly kind to any of his villains of either gender. Fagin is one of the most notorious rascals in fiction.

Maybe Dickens was harder on women than men, I don't know. But read Jane Austen awhile. I'd much prefer Esther Sommerson to whats-her-face, the main character of Pride and Prejudice. In real life at least. Austen's character is much more interesting in a book, but definitely not in real life...

I found the character I was referring to in Little Dorrit -- Flora Finching, based on Dickens' fiancee it seems. She wasn't a villain, just a silly comic character. Your comment about Dickens' intent (or lack of) in creating female characters reminded me of her, and made me wonder. If his ridicule was only to create a memorable character/caricature (which he does so well), it seems callous toward someone he knew.

My favourite Austen character is Anne in Persuasion, but then she's also of the long-suffering type :)

Tristram wrote: "Bleak House is one of my all-time favourites, but like Kevin I couldn't bear that goody-two-shoes Esther.."

Hold on, I have to go find another word for grump.

Kim wrote: "Tristram wrote: "Bleak House is one of my all-time favourites, but like Kevin I couldn't bear that goody-two-shoes Esther.."

Hold on, I have to go find another word for grump."

Kevin wrote: "I'd much prefer Esther Sommerson to whats-her-face, the main character of Pride and Prejudice. In real life at least. "