I really enjoyed the narrator's diverting and witty reflexions on hackney coaches in this Sketch, which appeared in January 1835 in the Evening Chronicle. Apparently, hackney coaches originally were private coaches of well-to-do families, which, on falling into disuse, were made into vehicles to hire.

This sketch shows Dickens at his wittiest, I think, for example when he describes how some passengers try to make other people believe they can afford their own coach by hanging a scarf out of the window in order to hide the number of the coach, while, all the time, there is a large number on the back of the coach.

"A hackney-cab has always been a hackney-cab, from his first entry into life; whereas a hackney-coach is a remnant of past gentility, a victim to fashion, a hanger-on of an old English family, wearing their arms, and, in days of yore, escorted by men wearing their livery, stripped of his finery, and thrown upon the world, like a once-smart footman when he is no longer sufficiently juvenile for his office, progressing lower and lower in the scale of four-wheeled degradation, until at last it comes to—a stand!"

Thanks Tristram. I love the bit where the bride attempts to cover the number! Also this:
'...why have they been swamped by cabs and omnibuses? Or why should people be allowed to ride quickly for eightpence a mile, after Parliament had come to the solemn decision that they should pay a shilling a mile for riding slowly?

Yes, Hilary, the whole Sketch is full of these wonderfully ironic remarks. I like that kind of humour a lot. 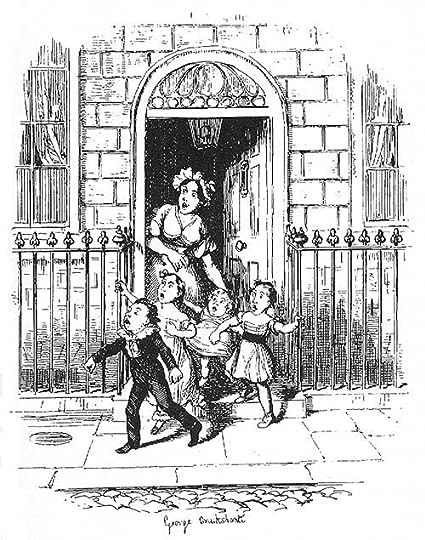 Here are my three favorite lines from this scene:

"We pause for a reply;—and, having no chance of getting one, begin a fresh paragraph."

"Leaving these fleeter means of getting over the ground, or of depositing oneself upon it, to those who like them, by hackney-coach stands we take our stand."

"We know all the regular watermen within three miles of Covent-garden by sight, and should be almost tempted to believe that all the hackney-coach horses in that district knew us by sight too, if one-half of them were not blind."

I'm still smiling over Dickens waiting for an answer and not receiving one. :-}

As for the illustration, I had to give it some thought when I first saw it to even know what it had to do with the sketch, then remembering the woman who had stayed with her daughter and grandchildren for a month and was now leaving, I'm assuming that is the part of the sketch the illustration is referring to. I would have had a Hackney Coach in it somewhere. 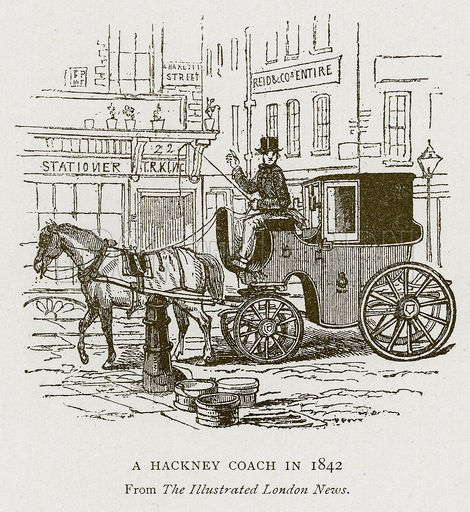 A Hackney Coach in 1842. Illustration for London in the Nineteenth Century by Sir Walter Besant

I quite forgot about that paragraph thing, Kim, and am happy to find you post it here. I think it was Henry James, who once criticized Trollope for his habit of addressing his readers directly from time to time, but I think nothing of this kind of criticism. Instead, I actually like the Victorians for their authorial intrusions into their stories and I also enjoy it when a writer makes fun of literary conventions and plays with the fact that he is actually writing the story. Maybe that's also why Tristram Shandy is my favourite novel.

This also reminds me of a funny scene in Mel Brooks's "High Anxiety". Normally, I don't like Brooks's humour too much because he never knows when he has pressed a point too far. He's like a child that has found a new, indecent word and goes on and on repeating it. But that scene is cool: We see a house from the outside by night, the camera zooms in on a window behind which we see the characters sitting at a table, the camera is zooming in and in and in ... and suddenly crashes through the window-pane. The people in the room start and look at the camera aghast, and the camera discreetly zooms back.