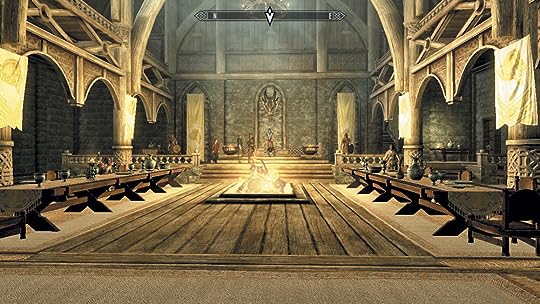 The Jarl Balgruuf the Greater was sitting in his throne, protected very well by his men and surrounded by his court. The legate was there along with two imperial guards.

"I am afraid that I will not be able to hold my neutrality any more..." Said the Jarl, thinking.

"I am sorry, my Jarl, that this is the only chose we have, but it won't be any difficult to Whitrun now that Ulfric knows he can't go through your hold anymore..." Answered the Legate.

The Jarl consulted his court.

Merrill had successfully made it past the earlier guards and into the main hall. She stopped running and walked into the kitchen since it would be the only place she could go without being seen, once she was in there she entered the cooks quarters, luckily nobody was there.

She quickly stripped out of her armor and hide it along with the weapons, she changed into a regular maid outfit and got cleaned up before walking back out. She made sure to keep a hidden dagger on herself just in case things didn't go well.

Since it seemed she was in the clear she grabbed a plate of food and walked into the main hall and helping serve the meal till she could get up the stairs. Once up the stairs she quickly made her way to the far back shadowy corner of the balcony that oversaw the entire hall. She was completely hidden in shadows and silently lifted a loose wooden board to reveal a bow and a quiver of twelve poison tipped arrows. She picked them up with a sinister smile and aimed for the Jarl, "so no one can get in huh?" she whispered silently to herself as she was about to fire on him.

But a guard entered the room running,

"My lord! The prisoners have escaped! They are causing turmoil in the city!" He announced.

"Quickly! Deploy all the guards! We must not loose the city!" The Jarl commanded.

"Legate Casadei, Irileth, Farengar, captain Gaius! Follow me. The Jarl stood up from his throne and started walking to the door besides him.

"The civilians are priority... We must protect them... No one shall die tonight!"

Merrill scowled as she pulled the arrow back and retreated back into the farther darkness of the corner. she put the arrow back in the quiver and put the bow and quiver into the hole and covered it up. she waited in the shadows as she thought up a plan, deciding if she should just leave now and try again another day or keep going.

She got up and sighed, "everyone should have made it out by now, "I'll leave for the Jarl now" she said to herself as she waited for everyone in the room below to leave so she could make it out of there and to the door he went in. After waiting about five minutes she took the bow and quiver back out and silently lowered herself off the balcony, landing with a soft thump on the table she made her way to the door and stopped in front of it, she took a deep breath and five arrows out, holding them in her hand and notched one on her bow. She opened the door slightly without noise and slid her way into it, pulling her bow up to shoot.

(Sorry, what is happening?)

((you took the Jarl and others into a door right? Merrill is going after them, she silently went into the door five minutes later and drew up her bow. i don't know if they're still there or not, like if it's a hallway leading somewhere or into a room))

(Oh, yeah, I meant te stairs leading to the other floor and the area were you could find the officer/legate and the map of te campaign. There isn't door... Sorry. Let's just said Merrill just sneak through the stairs as they can't be seen from the table.)

The Jarl was on the other side of the table that had a map. Irileth, besides him and the two imperials, leaders of their own garrisons, were on the opposite side of the table, giving their backs to the stairs.

"I assure you, Legate, if this war gets harder to Whiterun no one of the two factions will be allowed here," said the Jarl.

"Yes, my lord. But I don't understand... How the prisoners escaped? They were wounded, barely moving... Something's is wrong..." The legate answered.

"How long does the reinforcements will late?" Asked the captain.

"Legate Rikke should be here by morning, the courier departed earlier," the legate answered.

"More bloodshed? What are trying to do?" Asked Farengar.

(God... Keeping a conversation between myself is tedious)

"But that is not why I called you here... There is something more important I want to discuss with you," said the Jarl as he was placing his steel plate armor on, Irileth helping.

(I'm gonna mention something 'bout the prophecy... But your character doesn't know it... Hehehe)

(But your character *doesn't* know it. Your shoot)

Merrill stayed at the last step crouching so they couldn't see her, only bad thing was she couldn't see them either. She pulled up an arrow and made sure it poisoned and notched it, she stopped once she heard Rikke was going to be here, she fight her once before she became an officer and better fighter, it definitely wasn't pretty and she didn't want anything to do with that woman again.

She snapped out of her slight daze and shook her head, "stay focused" she whispered to herself, she waiting a bit more, every now and then she would look down the stairs to make sure she wasn't spotted. She decided to listen in for a bit longer, she could use the information on the imperial and give it to Ulfric so this siege wouldn't be a complete lose.

"This war... Is waking the worst of us, legate," explained the Jarl as he placed his armor in his chest.

"Orphans, widows... Childless parents... The people suffers, and when people suffers... It comes the hate," he said as he placed the boots.

"Outside the cities... We're our rule is not always possible, the citizens of Skyrim perpetrates wrong acts, evil acts, they play with dark magic!" He said placing his braces on, Irileth helping him wrapping the armor.

"They take advantage from the war to do evil acts, mages practice necronomancy out there!" He said with indignation.

"They are using the bodies left behind to raise they own armies..." He said as he finished putting on his armor.

"We must be careful on that side too.,. And we need the help of some of your men, legate," he concluded.

she heard what he said and paused, she remembered getting reports near Windhelm of necromancers in the caves and stealing bodies from the fields, this didn't sit well with her, not at all.

"nows not the time for this" she muttered to herself, if those necromancers are causing trouble here too then they might try something and if they attached Windhelm she needed to there. She gently laid her bow and quiver down on the stairs and silently walked down them, she would sneak off out the front door and if the guards tried stopping her she say something about having family in town and she needed to see if they were alive, or something of the sort.

She hurried to the bottom of the steps, hoping no one saw her, then she began to speed walk to the door, faking a panicked expression and a few tears to sell it for the guards.

But just as she was about to leave, the Dunmer woman, the vampire entered...

"Oh, hello! Is something wrong?" She exclaimed when she saw the fake tears of Merrill.

"Wait a moment... Isn't you the guard from the prison?" She questioned loudly:

"by the nine" she said shaking her head and kept speed walking towards the door. "I thought you left by now" she said to her" By now she was at the bottom of the last steps right before the door, "just get past the door and straight to Windhelm" she told herself, "no distractions, no distractions" she said

she stopped at the bottom of them with the girl, luckily there were only two guards at the door so she wouldn't have any problems, hopefully. "look how about we get outside, then we can talk, hows that?" she asked her

"Fine? You sure? It is really nice here... And there is like a turmoil outside..." She said.

The guards there exchanged glances and quickly got out of Dragonsreach.

"But if you insist," she said as she waited her to came closer, she then got out.

(I will be outside)

she sighed in relief that she left and ran for the door herself, she was wondering if it was possible for her to just keep going and lose the girl. she opened the door and walked out.