"Why would I want to be turned? If I were turned, I'd be the one biting, not the one being bitten. And if I'm honest... being bitten from some of the sexier vampires here isn't that bad." 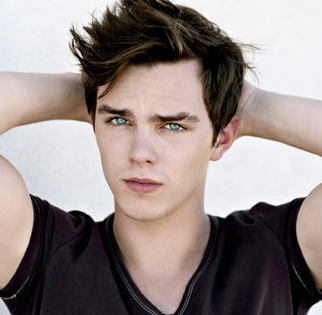 Nicholas is a tall man at 5'10. He's as pale as a vampire, despite not being one, from all the blood loss he's had. He has electric blue eyes and short, messy dark brown hair. He's fit, his body lightly muscled, and if you'd examined him you'd find old bite marks on his neck and thigh, even some on his shoulders. He even has a tattoo of bloody fangs on his right butt cheek.

Personality: Nicholas is a bit eccentric. He's casual, laid back in a cheeky sort of way. He's sarcastic, humorous, and often blunt. Everything he does suits him somehow, he always asks 'What will doing this gain me?'. In that way, you could say he has a strategic, almost political mind. He's a flirt and he's definitely experienced in the ways of romance. He's intelligent, though he dumbs that down, acting like a simple servant to his masters. In fact, some say he's like a slave without shackles around his wrists. If anyone knows anything, it's Nicholas, he has his ear in every conversation in the kingdom. Conniving, perhaps, and he always gets what he wants. He's a little entitled, that way. He doesn't act like a shackle, more like a privileged whore to the king.

Background: Nicholas was a human boy, but now it could be argued he's not quite human anymore. He's slave to the vampires, specifically King Georg. He's a slave to their bite, to the intoxication. When he was a boy, he came before the king and was snarky enough to ask for a bite, so he got what he asked for. After that, he was hooked, and he got a position as a Shackle in order to keep close to them. Vampire bites only turn you if you drink their blood as well. Otherwise, the bite is intoxicating, like a drug. It improves your health, makes you a little strong, a little faster, even makes your life a little longer. But after a while, it changes you. It changed Nicholas, and now he really isn't sure if he's human anymore. He's kind of the whore of the kingdom. He'll sleep with any vampire who asks for his time, in exchange for being bitten. Often he'll spend days with a lover, locked in their bedchamber, letting them abuse him as long as he gets that bite. He doesn't want to be changed, he just wants the high that it gives. Still, being the whore gives him certain pleasures other than being bitten. He's trusted by most in the kingdom, they'll pour their troubles out to him and he'll listen, which means he knows some pretty valuable secrets. While he's a vampire whore, sometimes he does pursue serious relationships if he's interested, usually in royal vampires he's spent a good amount of time with, or with humans who aren't slaves.

Secrets: He has an addiction to vampire bites. It's not really a secret, but he plays it off more as that he has some kinky love of being bitten, but in truth he's addicted. If he goes too long without attention from his vampire lords and ladies, he gets shaky and even paler.

Pet Peeves: Not being bitten, and being denied sex.

Relationships: There's likely not many single royals who hasn't felt him up for a good time. However, he lacks any serious relationships.

Other: Someday he'll have to be made a vampire... but that day isn't here yet.

Personality: Shay is a wild child. She knows she's privileged and she abuses that power. She likes sneaking out, partying, meeting up with shady people, being out all night. She's flirty, adventurous, and likes to dance on the side of danger. She'll do unexpected things, such as kissing a random person, just because she feels like it. However, despite this rebellious attitude, she's rather kind if you meet her in a good mood. Smart, friendly, and extremely fun to be around. She's unpredictable though, and she does have a temper, so that might lead to some difficulties. Deep down she isn't a bad person, she just likes to live life to the fullest. However, she can be gentle when she wishes to be.

Background: In truth, Shay doesn't have a very long history. She was born into the royal werewolf family, close to her siblings and parents. Yet she never felt like she belonged with them. Sure, she has the grace and beauty of a royal, she can be civil when she must, but it's so boring. So she spends a lot of time with the slaves and even, sometimes, socializes with vampires. For some reason she doesn't fight with them like her family does, in fact she enjoys their company. She's pretty independent and she didn't want to believe what her parents told her. So she chose to find out for herself. She dated a vampire for a time, and even though he broke her heart, the fact she had loved him showed her that not all vampires were terrible. They fascinated her from that point on. Their cold to her warmth, their strength, their smell. Even their fangs. There's a beauty to vampirism, and sometimes she wonders, if she were a human, would she have chosen their side, or stuck with werewolves? Still, she knows her place, and she knows she could never love a vampire... unless she did.

Secrets: She has loved a vampire before. A young one, barely fifty years of age, who charmed the pants off her. He was her first, and ever since she'd been attracted to vampires, even though her first ended up breaking her heart. He had used her, saying afterwards he only wanted to see if he could trick a wolf into shedding her fur and sliding into his bed. She was humiliated, but she really had loved him, once.

Relationships: Other than her former vampire lover, she hasn't had many real long term relationships.

Other: She's looking for a slave to keep.