Mod
An extensive collection of books. They vary from extremely old to new. 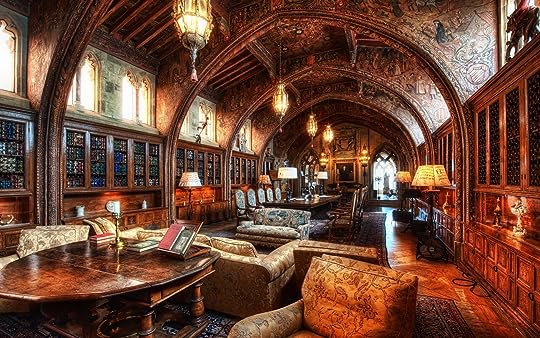 Mod
Fanna walked into the library and walked to seat herself in front of the fire place. She quietly chewed her bread and thought about what book she would read today. As she thought she looked over to see a copy of demonology off the shelf and sitting near the fire place... "Well that's weird." She mumbled to herself.

Ezra walked in as well, looking at all the books. "Lets see..." he mumbled to himself as he scanned the shelves. Finally he picked an old book that seemed to be in Spanish. With it being his native language, it was easy to read.

Mod
Fanna looked around as she finished her bread, the shadows felt strange... "Hey, Ez? Was this book here yesterday when you left?" She asked still looking at the book as it lay on the floor near her feet.

Victoria looked through the big shelves of books, she found the section with the the old english writers. She selected one and was going to go near the fire, but she was stopped by the two other people near it. So she found an armchair away from the two.

Mod
Fanna noticed Victoria, "Hey Tori, long time no see. Where ya been?" She still looked cautiously at the book that had appeared out of nowhere, and then to Tori with a reassuring smile.

Mod
((Audra, we are the alliance silly, but there could be other alliances that you switch between.))

(Ohh, XP I'm sorry. I was thinking that there were upper people in this alliance that needed things taken care of that they didn't want to deal with thereselves, so I'll change my post. :P Just give me a few seconds.))

Mod
((it's alright. Basically Fanna was once part of the unseelie court, but she grew a conscience and got banished. So she formed this alliance to protect people and those who couldn't protect them self along with getting rid of whatever deserved it. But we're still a new group so we're trying to "recruit newbies"))

Mod
((Lol Ya. I'll go put that in the story update so ppl don't get confuzzled.))

Victoria looked up at the familiar nickname, "Hey Fanna." She shrugged, "I've been out and about." She noticed Fanna look nervously at a book. She tried to read the title but it was at an angle that even her advanced eyes couldn't make out.

Ezra looked at the book as well, and a frown formed on his face, "I don't remember touching that book, so no, it wasn't," He said, then felt a chill go down his spine as he grew dizzy. He sat down, wrapping his arms around himself when he began to feel cold.

Mod
Fanna looked at Ezra and back at the book, "Ez? Ez are you ok?" She walked quickly over to him and stared at the book wondering where it had come from, come to think of it, she'd never seen that specific book in the library before... She read up in the demo section all the time... She would have known... She looked at Ez and smiled reassuringly

Ezra breathed heavily, looking at Fanna and giving her a weak smile, "Y-Yeah...I'm fine..." He murmured, but the room wouldn't stop spinning. He groaned and tightly shut his eyes, hanging his head as he began to shake.

Mod
Fanna shook her head, "Noooo you are not." She put her hand to his forehead and held his hand with the other. She couldn't let her brother go... She was scared... Not that she would admit it... But she was.

Ezra's forehead seemed to be burning, and he squeezed Fanna's hand tightly as he coughed. "I feel sick..." He finally admitted, opening his eyes halfway. They were clouded and he seemed dazed.

Mod
Fanna looked really worried, and let go of his hand running to the book... As soon as she got within 5 feet she felt dizzy... And as if she should be afraid... But she wasn't... She tried reaching for the fire dagger in her back pocket... But she couldn't move her hand. At this point she wasn't afraid, she was livid. What the hell was doing this and how DARE it tamper with her body.

Ezra could barely keep his eyes open, and as he forced himself to sit up, he leaned forward. Suddenly blood came up, causing him to gag and cough. "F-Fanna..." He choked out in a tight voice, "S-Something feels w-wrong..."

Mod
Fanna turned and looked at Ezra. Her eyes went wide... "Ash!!!! Ashlynn where are you???!!!!" She looked around frantically. But she was sure that she had left the manor for the day. "Damn it."
((Im gonna make another character named Bryce and bring him in to this.))

Mod
(( heyyyyy sorry I've been inactive been busy! Back so imma just slip in...))

Ashylnn came out of her room, looking around for Fanna. She'd heard how desperately afraid she'd sounded
"Fanna!? Fanna what's wrong?!" She yelled, running into the library.

Mod
Fanna looked at her and was breathing frantically. "This demonology book showed up out of no where, and somethings wrong and I don't know what's wrong. There's something here." She looked frantic.

Mod
Ash (shortening her name cause I'm lazyyyy) ran to Fanna gripping her shoulders.
"Where is it!? Show me now!" She said. A demonology book? That could mean a few things. And most of them she didn't like.

Mod
Fanna pointed to the book near her spot next to the fire place... "It showed up when i was looking for something to read this morning. I feel like its emanating fear, but I'm not effected... do you think it's because of my background, Ash?"

Mod
Ash's eyes hardened "I don't know." She said, going over to pick up the book. She could instantly feel fear snake its way over her. She closed her eyes for a moment, whimpering softly as she got multiple flashes. The things that's happened to her... She dropped the book on the chair again. The feeling stayed with her, but began to sink away. She placed a hand on her heart, her breathing a bit heavier.

Mod
((Who wants to double as the demonic entity guys?))

((I was thinking of making a werewolf, but I could make him a demon instead))

Mod
((Doesn't matter, I know we have a vamp and werewolf/dragon hybrid on the grounds... But I don't think they would be apart. Go right ahead. Don't matter.))

((Okay I'll change his information then))

((I'm sorry I dropped off in the middle, school and basketball have been kicking my butt))

Victoria watched, slightly in concern, but mostly in curiosity. She didn't want to go over near the rest of the group since the only one she really knew was Fanna. She watched though as Ashlynn pick up the book and saw the wave of fear go over her. Only demons or empathetic vampires could cause that kind of terror, and it probably wasn't a vampire.

Mod
Right on cue Bryce walked in to find an interesting scene. He felt the fear... but it wasn't coming from the people... it was coming from the book. He ran his fingers through his hair and walked near the book... it had to be something seriously strong.... or something that had the power to throw out and make the illusion of strength. He felt through the emotions emanating around the room, controlling it so he wouldn't feed.

Fanna looked toward the new guy... for some reason she felt a shift in the pressure of the room. As if something were probing for emotions... or feelings... or something like that. She looked at him again... and noticed... "Hey, who are you... You look familiar... like i know you from somewhere." Then her mind flashed back to article's she had read in the archives of the library... "Denton, you're Bryce Denton... your an Empathetic Vampire." She looked at him with curiosity, "Fascinating..." She said to herself, forgetting the situation at hand. She was in awe... this guy was like 200 years old... so why the hell was he here.

Mod
Ashylnn looked over at the newcomer. She looked over him as Fanna identified him. She remembered reading something about him... And she remembered whispers of him from when she was still in the Summer Court. She looked away and focused on the book. She wanted to skim through it... Identify what was inside and why it was here. But... She didn't want to feel that kind of fear again. She ran a hand through her long, curly brown hair. She closed her eyes, thinking for a moment. She'd have to suck it up. She reached down and picked up the book again. Instantly it all came crashing down on her. But she set her jaw, determined, and began reading.

((That was so long. Once I get going I can never really stop))

Mod
((Lol you saw mine, I like doubling, makes detail easier sometimes. Well Im hitting the hay guys. Night! Be back in the morning!!))

Mod
((So i think it's Izzy's turn with the werewolf he created come in for the mysterious book thing. Then it's you, then Onyx, then me.))

Mod
((Ya, but we'll have to wait a bit because i think people are still at school.))

Mod
Lol I had some stupid ass church thing. Wanted to die. But we got pizza