Mod
Kay we need two mods. So if you would just fill in the application below we can determine which two people best fit the positions.


3.Have you ever modded a group before?:


4.If you answered yes to question 3, which groups?:


5.Why do you feel you would make a good mod for this group?:


6.If we did make you a mod, what could you contribute to the group?:


7.What ideas do you have for this group that could make it more interesting? (three minimum )

8.Finally, we need an rp sample. This should be at least 5 sentances.

Thanks for your application. We will review these and get back to you with who we feel best fits our criteria.


4.If you answered yes to question 3, which groups?: Uh, I do not remember most of the names...I think I have modded in about 8-10 groups though? Most of them have died sadly :( I will make sure this does not happen for this one though!


5.Why do you feel you would make a good mod for this group?:
I am insane like the current mods >~> Yes, You two are insane. This is a plot that I believe has so much potential that with a few more great ideas it could easily become a popular group with tons of people :3 I think I would be a good mod because I come up with these random ideas at times that can make a group more interesting! ^~^


7.What ideas do you have for this group that could make it more interesting? (three minimum )

~ I dunno if we exactly have this yet~ But some sort of thread that will manage exactly what season the group is in so the right faes would have more power and such.
~ Maybe a opposing group that is trying to get rid of the manor? Just to add more conflict to the story-line.
~ Create an actually person who is the leader~ Maybe set up a few tests for people who want to enter the manor to prove if they are worthy or not?

8.Finally, we need an rp sample. This should be at least 5 sentances.

"So warm and...sticky " The young girl with bobbed hair observed, placing her fingers in the liquid in front of her. Run!Run!Run! The girl groaned softly at the voices in her head before she licked the blood on her fingers. "I`m so thirsty though! Please let me drink " She begged the voices inside her head as she leaned over the dead man`s body that was clearly under the streetlight on the sidewalk, his blood running down to touch the road beside him. Victoria!Run!Victoria! They voices hissed and she suddenly grabs her head "No!" She suddenly screamed at them. Her body was shaking from the coldness in the night air, the asylum`s white hospital gown shifting in the cool breeze. Blood covered her dress and blood splatters covered her hands and arms " So t-t-thirsty...Please" she hissed back as she leaned down closer to the body. Her human teeth dug into the neck of the male and she ripped the skin off with surprising strength and began gulping down the blood, her chipped red nails scratching at the cement. Blood traveled down her chin and dribbled down her gown to streak her skin but she hardly cared. The voices became louder and she sat up slowly and coughed. They are coming.They are coming.They are coming! They shouted into her cracked mind and she stood up slowly, The pain that the doctors caused on her body catching up to her. She glanced over the dead man`s body before she broke down into a fit of laughter, her mouth open as bubbly sick laughter escaped her and echoed down the streets of the small town. 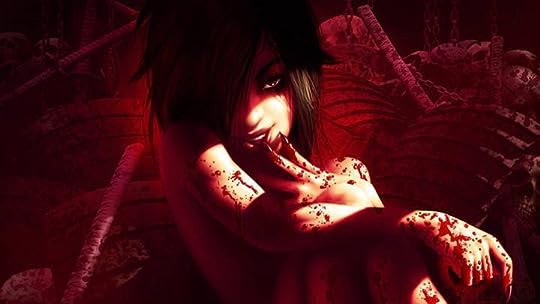 2. Well, I recently joined this group, so I can't honestly say as I had been a member for only a couple of days. 5?

4. The Great Awakening is one that was pretty active.

5. I am bursting with creative juices.

6. Subplot ideas, more species, and such.

7.
- New factions/groups outside of the Alliance and the Courts.
- New species.
- New places to roleplay in.

8.
Jayden stood outside of the manor. It towered over him, appearing evermore ominous. He gulped. This is a sanctuary, he thought to himself. It looked like one of those haunted houses in a horror movie, not a safe haven for outcasts. He tried to steel his nerves, he came a long way for this, he was going to go inside, and finally belong. He looked behind him, and remembered where he came from. The years of harassment, abuse, and depression. He wanted to die for so long, until he caught wind of this place. A second chance, a new life. He took a deep breath, and began to ascend the steps...